Ada Brownell spent seventeen years as a daily newspaper reporter. She won the Colorado Psychiatric Society’s 1998 media awareness award, was nominated for the American Psychiatric Society’s media writing award in 1995 and in 1996, and was nominated for the American Cancer Society’s public health reporter award in 1994. Also an avid Bible student, Ada has a certificate of ministry from Berean College, holds a bachelor’s degree in mass communications, and has sold articles and fiction stories to forty religion publications.

She and her husband Lester had five children—all of whom have served, or continue to serve, in the Christian ministry. They lost their oldest daughter, Carolyn, to cancer in 1990.

You have an extensive writing history, having retired from a job as a medical reporter. What initially sparked your writing journey?

At age fifteen as youth president of my church I started submitting ideas for services to a youth magazine and wrote a few articles. After I married we moved to Thompson, Utah—population ninety-nine. At first I thought we missed God’s will, but after seeking God my eyes opened to the harvest field.

I started a Sunday school in that town and sold a couple of significant articles. I enrolled in a Writing for Christian Publications course and also became a stringer for the Grand Junction Daily Sentinel, about ninety miles away. A few months later, and another move, and I landed a full-time reporting job in Leadville, Colorado, and within a week after moving from Leadville was hired by the Pueblo Chieftain in Colorado. Pueblo was a city of 90,000. I worked three years in the 1960s, then stayed home with our children nearly twenty years. I earned my degree and was rehired by The Chieftain and became a journalist again, although I continued to freelance.

My faith is so much of who I am that it surfaces often when I interview people, write for a secular publication or a religion magazine—just as a non-Christian’s faith (we all believe in something) becomes evident in much of his writing. Spreading the gospel and encouraging people is why I freelance.

I would say the move to Utah was a U-turn because I never would have become a writer or a reporter had I stayed in my hometown. Another big turn came when I admitted we couldn’t send our children to Christian colleges without me going back to work, so I completed my degree. God miraculously opened the door because the morning newspaper in Pueblo folded the same time I graduated. But they created a part-time reporting job for me anyway (at the top union salary) and in a few months I was full time. There I was able to share the gospel through personal columns, and sometimes during an interview or to co-workers. 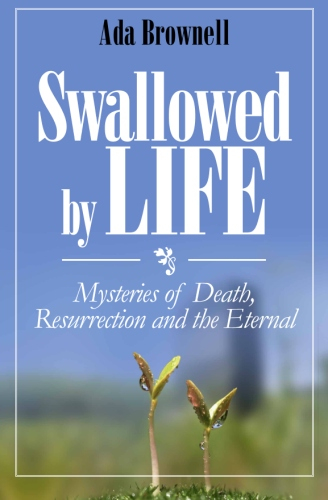 Let’s talk about your book, Swallowed by Life: Mysteries of Death, Resurrection and the Eternal (Createspace, December 2011). Please tell us about it.

Do you know you are more than a physical body? Evidence shows our body is constantly dying and being renewed cell by cell and about every seven years is totally rebuilt—even our skeleton. We start as an egg about the size of a dust mite, yet we were the same person in the womb we are today. We may lose limbs, gain and lose weight, have vital organs removed and mechanical or transplanted parts inserted, and we’re still the same person. Inside us is LIFE, and a soul and spirit which were designed by God to live forever.

Swallowed by LIFE is subtitled “Mysteries of Death, Resurrection and the Eternal.” The book speaks about this mystery; how you know what to believe, the wonder of life with all its electrical systems, the awesome truth about cell death and regeneration, brain death and other mysteries of the change from mortal to immortal, where we go when our body dies, resurrection, a glimpse at what we will do in heaven, God’s mercy after man’s rebellion when He promised a Redeemer way back in Genesis to deliver us from death, and leaving a legacy here. Questions and answers are included for study groups.

What do you hope others will learn from reading it?

That medical evidence shows we are more than a body and Jesus came to do something about death, and He did it.

God often uses our writing to teach us. What did you learn (about life, faith, and/or even yourself) in the process of writing this book?

My own faith was strengthened after losing a daughter. Furthermore, as I’ve always known, although evidence and testimony is readily available so that we will believe, we can never prove we’ll live beyond the grave because faith is necessary for salvation. The bottom line is always faith in Jesus, our Redeemer, and the Heavenly Father who sent Him.

A cup of decaf coffee and something sweet.

I’ve either been the organist or the pianist in most of the churches I attended until I had hand surgery and retired. I wasn’t the best pianist around because even though I can read music, I played mostly by ear with evangelistic style which is passé now. Pastors often used me over better qualified musicians because I was “reliable.”

Andre Crouch’s My Tribute: To God Be The Glory.

We once had a poodle named “Macho” because he thought he was part human and part Doberman.

Thanks, Ada. It’s nice to have you as a guest at DivineDetour.

To purchase Swallowed by Life: Mysteries of Death, Resurrection and the Eternal logon to: