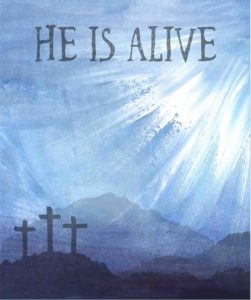 It just so happens that Easter falls on April 1 this year. April 1. April Fool’s Day. Also known by some as National Atheist’s Day. Another interesting “holiday” combination in 2018. (Valentine’s Day and Ash Wednesday shared February 14 just a few weeks back.) Christians will be celebrating Christ’s Resurrection while others will be claiming there is no God. God’s Holy Word has something to say about that.

After the Sabbath, as Sunday morning was dawning, Mary Magdalene and the other Mary went to look at the tomb. Suddenly there was a violent earthquake; an angel of the Lord came down from heaven, rolled the stone away, and sat on it. His appearance was like lightning, and his clothes were white as snow. The guards were so afraid that they trembled and became like dead men. The angel spoke to the women, “You must not be afraid,” he said. “I know you are looking for Jesus, who was crucified. He is not here; He has been raised, just as He said. Come here and see the place where he was lying. Go quickly, now, and tell his disciples, ‘He has been raised from death, and now He is going to Galilee ahead of you; there you will see Him!’ Remember what I have told you.” So they left the tomb in a hurry, afraid and yet filled with joy, and ran to tell his disciples. Suddenly Jesus met them and said, “Peace be with you.” They came up to Him, took hold of his feet, and worshiped him. “Do not be afraid,” Jesus said to them. “Go and tell my brothers to go to Galilee, and there they will see me.”

Listen, I tell you a mystery: We will not all sleep, but we will all be changed — in a flash, in the twinkling of an eye, at the last trumpet. For the trumpet will sound, the dead will be raised imperishable, and we will be changed. …  the saying that is written will come true: “Death has been swallowed up in victory.” “Where, O death, is your victory? Where, O death, is your sting?” … thanks be to God! He gives us the victory through 0ur Lord Jesus Christ. (1 Corinthians 15:15-57 NIV)

CHRIST IS RISEN! HE IS RISEN INDEED! Have a glorious and blessed Easter!!!!!