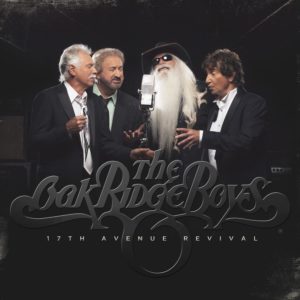 The Oak Ridge Boys have sold more than 41 million records worldwide, are synonymous with ‘America, apple pie, baseball, pop, rock, gospel, and country music,’ and are members of the Country Music Hall of Fame (2015 Inductees) and the Grand Ole Opry.

The Oaks have garnered numerous accolades and awards, including five GRAMMY® Awards and nine GMA Dove Awards, along with countless chart topping albums and singles. The group has earned many gold and/or platinum albums, one double-platinum album, and over 30 Top 10 hits.

Joe Bonsall, a longtime member of the Oaks, and a successful author with more than 250,000 books in print, agreed to an exclusive interview to talk about the Oaks’ new release, 17th Avenue Revival (Lightning Rod Records / Thirty Tigers, March 2018).

The Oaks’ career has spanned decades, as well as formats. However, 17th Avenue Revival seems to be generating a unique response from a wide range of demographics. What’s different about this album?

The overall positive feel of this project seems to be generating a huge response from our fan base and beyond. Folks are finding many of these songs meaningful to their daily lives, which is really a very cool thing. The world can be a dark place, and everyone needs some light to shine through the darkness. It’s not that all of these songs are gospel songs, yet the light of Jesus Christ still shines through much of this material and as you know… in HIM there is no darkness at all. Many of these songs revolve around shining a light or letting the love shine down or letting God’s love shine on me. We are calling our tour this year the Shine the Light Tour because of these songs.

Who or what was behind the musical direction for the project? How did you go about selecting the songs?

Well, all credit goes to our producer, Dave Cobb, for the concept and many of the song ideas. We wanted to do something monumental, and Cobb convinced us to not even think about commercial country music. He wanted us to reflect upon the early days of rock and roll, like Elvis and Jerry Lee Lewis and Ray Charles and the early blues guys. What turned us on to them, and what in turn turned THEM all on. Most of those guys came out of church and early gospel. As we did, and so did Dave Cobb.

Dave said, ‘Hey, we don’t have to cut an entire gospel album, but we need to lean heavily on those sounds and attitude throughout.’

We did just that. We recorded some real gospel songs and a few hymns, as well as some old black spirituals, but we also recorded some new songs by today’s songwriters like Vince Gill, Ashley Monroe, Jamey Johnson, Larry Shell, Buddy Cannon, Aaron Raitiere, Mando Saenz, Brandy Clark, and Shane McAnally. I saw a great review that said 17th Avenue Revival is a cross between Old Time Rock and Shouting Gospel… I think that covers it all quite well. Thanks, Dave!

The CD/album cover photo is striking in that it’s Sinatra-esque. What’s the story behind the art direction and design? Where were the photos taken?

All the cover art, PR photos, and several videos were done at the legendary RCA Studio A in Nashville, where David Cobb is now in residence. This wonderful, historic studio, located on what was once known as 17th Avenue, was alive in the early summer of 2017 with Oaks’ creativity. All of the look and feel was the brainchild of Brandon Wood of IndieBling. He wanted the artwork and videos to capture the magic of the “revival” that was going on in Studio A. A revival of music — and yes, of the studio itself, which had been in danger of being razed awhile back and turned into condominiums.

We actually recorded a couple of the songs gathered around one microphone, as the cover suggests. Brandon wanted us to look like we had just left a formal event, loosened our ties, and started singing. Hence the Frank Sinatra-Dean Martin look. SO many young and energetic people were the force behind all of this. A young producer, young players, young engineers, young songwriters, and young creative people behind the camera as well. 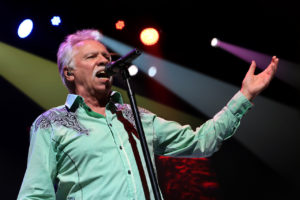 Any final thoughts about the project?

We all accomplished our goal here and that was to make a different kind of album than we have ever done before — and for a group like us, that has been doing this for decades, that is saying something! For more info about Joe, visit his personal website.

To order 17th Avenue Revival on Amazon, iTunes, and/or other online retailers, click here. Purchase Joe’s books, including On the Road with The Oak Ridge Boys (Harvest House, 2015) here.