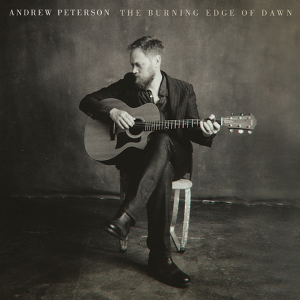 Songwriter/recording artist Andrew Peterson has forged his own path in Christian music with a unique talent for telling stories that evoke emotion. Like, for example, joy, which is the central theme for his latest album, The Burning Edge of Dawn.

Also a best-selling (and Christy Award-winning) author, and the proprietor of the Rabbit Room, Andrew still finds time for a heavy touring schedule this season.

Off the road, he makes his home near Nashville, with his wife, Jamie, and their three children.

Please tell us about your new album, The Burning Edge of Dawn (Centricity, October 2015).

I couldn’t be happier with this album, partly because I was able to make it with one of my oldest and dearest friends (Gabe Scott), but also because it feels so joyful. That’s not to say there’s not heavy subject matter, but something about the way the songs came together pointed away from the sadness and towards the joy. It feels like a natural progression from Light for the Lost Boy, which was about hope, about being stuck in a tunnel and fighting to believe that you’d make it through. This record feels to me like that moment when you’re still in the dark, but you see, at last, the light at the end of the tunnel.

You wrote or co-wrote everything on the CD. What was the foundation song for the project?

The first song I wrote for the album was The Dark Before The Dawn, which more or less aimed the compass for the rest of the project. It was written sometime in the mud season of winter/spring, when I was quite literally yearning for a change in the weather. The state of my heart was so similar to the state of Nashville, it was hard to see which was the metaphor. The rest of the songs were written in that same space. 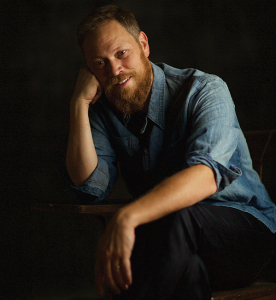 Are you generally a glass-half-full kind of guy?

No, I don’t think so. Jamie, my wife, might say otherwise. It’s easy for me to exult in a good day, easy for me to praise or to give thanks for something beautiful — easier, probably because I also see and experience an occasional heaviness of spirit. I don’t care if the glass is half-empty or half-full. I just know I’m thirsty.

Was the garden theme intentional from the beginning?

No, there wasn’t an intentional theme in the beginning, but it was easy to see as the songs came that there was an agricultural and seasonal theme playing out. I planted another garden this year, got my hands in the dirt and planted rows of seeds as the daffodils started to show up, and it was impossible to ignore the message God seemed to be sending: good things take time to grow; the winter is long, but spring is coming; first death, then life. It’s an old story, but it never gets old.

You’ll be on tour a lot between now and the end of the year. Not counting home, what’s your favorite tour stop?

I really love Chicago. I was born in Illinois, so I have a soft spot for that town. That may or may not have something to do with Italian food. I also really love the Carolinas — especially Greenville, South Carolina. Whoever planned that downtown should do the same in every city in America. It feels very European, with all the cafés and walking paths, beauty around every corner. Every time I think, “I could use a bench right about now,” I turn around and there’s a bench waiting. I like benches.

You’re a husband, father, singer/songwriter, and author. If you knew you couldn’t fail, are there any other dreams you would pursue?

I’d love to make a film one of these days. I’d also love to plan a city like Greenville. Lots of benches and bookstores and ice cream parlors.

I’ve often resonated with Jeremiah. One of my professors in Bible college taught a course on that book and ever since I’ve had a soft spot for the ‘weeping prophet.’ His heart was broken over the destruction of his city, he longed for its restoration, he met with tragedy again and again. He’s thrown into an empty cistern for days. And yet, the book also has these beautiful promises, passages about God’s presence and protection. He seems like a real person, unlike some of the Old Testament characters.

How long have you lived in Tennessee?

Eighteen years now. That means I’ve lived here longer than either Illinois or Florida. Tennessee is a sort of cultural and geographical middle ground between the cornfields of central Illinois and the dirt roads of North Florida. Nashville is southern, but I don’t think of this as the Deep South. And Illinois corn is just a few hours away.

Thank you, Andrew! It’s a pleasure to have back at DivineDetour.

To purchase The Burning Edge of Dawn, log on to: