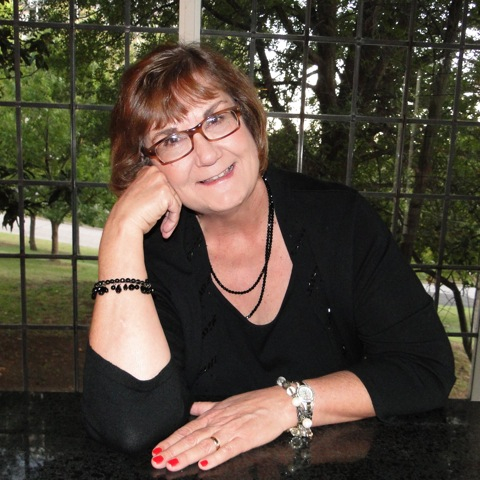 Carla Stewart grew up in a small town in the Texas Panhandle. After graduating from the University of Oklahoma, she worked as a registered nurse for a number of years. But she always dreamed of the day she would write novels.

She launched her writing career in 2002, and in 2007 she won two American Christian Fiction Writers Genesis awards for unpublished authors. In 2010, Chasing Lilacs, one of those Genesis winning stories, was published to rave reviews. Broken Wings was released the following year—and it also garnered five-star reviews. Her third novel, Stardust, releases today.

Carla and her husband are the parents of four married sons and have six grandchildren.

Carla, welcome back to DivineDetour! Please tell us about Stardust (Faithwords, May 15, 2012).

Stardust is the story of a young mom whose unfaithful husband drowns in the bayou of East Texas in 1952. Shortly after she buries him, Georgia Payton inherits the derelict Stardust Tourist Court from a distant relative. Faced with opposition from the aunt who raised her and others in the town, Georgia breathes new life into the cottages.

The guests who arrive, though, aren’t what Georgia expects: her gin-loving mother-in-law; her dead husband’s mistress; an attractive drifter who’s tired of the endless road; and an aging Vaudeville entertainer with a disturbing link to Georgia’s past. Dreams of a new life are crippled amid the havoc.

Woven throughout is the presence of polio, both as a fearsome possibility and a stark reality for some. When polio strikes close to home, Georgia’s only hope is that she can find the courage to forgive those who’ve betrayed her, the grace to shelter those who need her, and the moxie to face the future. One thing is certain: under the flickering neon of the STARDUST, none of their lives will ever be the same.

Wow… an interesting premise! Where did you get the idea?

My stories always seem to have their roots in my memories, little sparks of ideas or questions I had growing up. For Stardust, I remembered the tourist court we once stayed in as a child—the kind with individual cabins. I liked the idea of it being a haven for weary travelers. I also had two relatives who had polio and carried the physical reminder of it their entire lives, and I remember the fear of the disease when I was a child.

Pairing unusual elements and weaving them into a story is a challenge that I keep returning to, so I brainstormed and let all the characters and plot possibilities simmer until I was ready to put pen to paper (or fingers to keyboard). 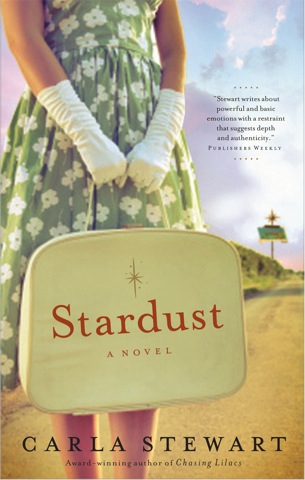 The biggest thing I learned with this book is that God enables us to do things we don’t think are possible. Just as He gives Georgia His divine grace to do hard things in Stardust, so He also allowed me time to get this book finished on deadline. My dad had unexpected quadruple bypass surgery during the exact time I’d set aside to write the rest of this book (which was about half done with miles to go). I knew what I was going to write, but my time and concentration were broken for a three-week period. And yet, I was able to finish with more than two weeks to spare for rewrites and editing, thanks to a fabulous husband . . . and God’s grace.

Your book covers are some of the most beautiful I’ve seen. How much input do you have on the artwork?

I’m asked to submit my ideas and covers that I like. Truthfully, though, I’m glad to turn the cover art over to the design people and let them come up with something. So far, they’ve done a fantastic job. I’m in awe of how my books are vastly different and yet the covers have a cohesive feel that represents me and my brand—nostalgic heartfelt fiction. The team at FaithWords is incredible.

What’s next for you and/or what are you writing now?

Sweet Dreams was turned in a few weeks ago. It’s set in 1962 and has two different settings—an exclusive Southern charm school and an oil tycoon’s ranch—both in Texas.

Here’s a short blurb: Two close-knit cousins struggle to fit in at an exclusive Southern charm school, but when they both fall for the same handsome guy, their love for each other is tested. Patsy Cline sings Crazy on the radio while the worlds both inside and outside the halls of the charm school begin to crumble. Past secrets and family lies collide with the changing times. Sweet Dreams has a flawed cast of characters whose dreams have the power to take them to new heights or tear them all apart.

The Homecoming of Samuel Lake by Jenny Wingfield

In honor of Stardust, I’ll go with Georgia on My Mind or Stardust by Michael Buble. Anything he sings is my favorite of the moment.

We’ve just finished a series on Peter at church, and he’s always been my favorite disciple. I like that he’s from a lowly background and knows the value of hard work. And I LOVE the depths of his passion, his love for Jesus. And yet, he fails over and over. I’m a lot like Peter. From the moment I became a believer, I’ve never doubted my faith or God’s power, but my walk has been like a drunkard’s path many times. And like Peter, the moment I take my eyes off Jesus, I stumble.

I’m not sure it describes my personality, but autumn is my favorite season, watching the colors change, the swirl of magenta and gold and fiery orange. I love the crisp feel to the air, the anticipation that comes with it. There’s something warm and cozy and invigorating, and I like that. Of course, there is that pesky ragweed, so maybe if autumn were to describe me, you could say that mostly I was pleasant and agreeable, but beware the ragweed days!

As a writer, are you a morning lark or a late-night owl?

Definitely a night owl. I always get a little surge of creativity after ten o’clock and write for a couple of hours. Sometimes it’s a blog post, but often a new scene, and sometimes a long, thoughtful email to a close friend.

The last time you visited, you told us about your Dachshund Zelda. How is she? Any new pets at the Stewart household?

Zelda is doing great. Still my little muse and watchdog. No new pets in our house, but she has a couple of new cousins at my son and daughter-in-law’s house nearby—Siberian husky sisters that are adorable and sweet. Zelda has a different opinion about that, though.

Thanks, Carla! It’s nice to have you back at DivineDetour.

Thank you, Kathy! I’m always glad to stop in. Blessings to you and your readers!

For more information about Carla, visit her website at http://www.carlastewart.com/.

To purchase Stardust: A N0vel logon to: