Chris Fabry ~ Under a Cloudless Sky 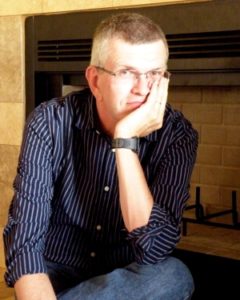 Chris Fabry is an award-winning author and radio personality who hosts a daily show on Moody Radio. He can also be heard on Love Worth Finding and Building Relationships with Dr. Gary Chapman, among other shows.

A 1982 graduate of the W. Page Pitt School of Journalism at Marshall University, Chris releases his 80th book this year. His novels include Dogwood, June Bug, Almost Heaven, Not in the Heart, The Promise of Jesse Woods, and Looking into You, and his latest release is Under a Cloudless Sky. He also writes nonfiction, film novelizations, and novels for children and young adults.

Chris and his wife, Andrea, now live in Arizona and are the parents of nine children.

In November, you were awarded two Christy Awards from the ECPA, and now you’re releasing your 80th book. What’s the driving force that continues to motivate you?

I love telling stories that connect readers with their own hearts. That’s what I hope each story does — provide a mirror to our souls. So I write to move myself with each story and pray it trickles down to the reader. 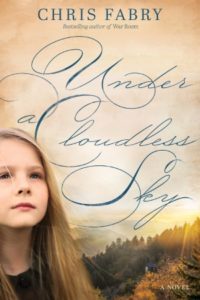 Let’s talk about Under a Cloudless Sky (Tyndale House, January 2018). What’s it about?

Elderly parent–child relationships, the power of secrets, trusting the wrong people, what God promises us and doesn’t promise us, the power of telling the truth, how the past can affect the present and future, and the power of forgiveness.

The title is actually from an old hymn titled Dwelling in Beulah Land. I set the story on Beulah Mountain, West Virginia, which is a fictional town. The story opens with two of the main characters excited to sing that song in church and the words have rich, spiritual meaning.

The plot of Under a Cloudless Sky has a dual timeline. Part of the story is set in 1933 and part is set in 2004. Only your protagonist, Ruby, appears in both time periods. Please tell us about that.

I love that we can see Ruby living in a time when there was very little technology around her and lots of squalor. Then, as we fast-forward, you can see all the changes in society and the culture and how she’s pretty much remained the same person. You’re also able to see the importance of faith in the 1930s and how it has changed and morphed through the decades. The Ruby who sang about Beulah Land in 1933 is the same Ruby in 2004, but things around her have drastically changed.

Those who “create” usually tap into a personal toolbox of elements to define their style. For example, a painter might use color, light, and/or shadows in s certain way to sign his work. A musician might use syncopation, key changes, and/or vocal intonation to set herself apart. What elements most define who you are as a storyteller?

What I try to mine in all my stories is the difference between the head and heart of belief. It’s one thing to sign on to a doctrinal position or a belief about God, Jesus, and the Bible. It’s another to struggle to live out what you say you believe. In this story, you see people on a wide spectrum of belief and disbelief and searching, but what I love is that many of them who are in one spot at the beginning of the story will move closer to true belief by the end, and by that I mean a real relationship with God rather than a set of ideas they adhere to. I’m not a big advocate of trying to get people to be more “religious.” What I want to show them is the effects of a real relationship with God.

Thank you, Chris! One last question. Do you have a New Year’s Resolution?

I started going to a gym with my family in August. I feel more healthy and want to keep working on that. That’s as close to a resolution as I’m going to get!

For more information about Chris Fabry, visit his website or follow him on Facebook. For two hours of daily spiritual encouragement, listen to Chris Fabry Live.

To pre-order Under a Cloudless Sky, log on to: