Debra Black ~ God in Every Season

Debra Black is the founder of Worship on the Square, a non-profit organization bringing Christians together in city centers to worship and promote awareness to social causes. She also works with Wellspring Living, a non-profit organization confronting sexual abuse and exploitation through awareness, training, and treatment programs for women and girls, serving at the women’s home and leading worship at awareness events, charity galas, and fundraisers for Wellspring Living.

Debra’s new album, God In Every Season, released last month, was produced by Josh Williams. She will begin touring this fall to promote the album and first single, Be Free.

At what point did you know you wanted to make music your life?

I didn’t have this certain moment, it was a culmination of a few things. My mom was an Italian opera singer. I grew up listening to music in my home, and singing in the church. It was around the age of eighteen that I began to feel the leading and calling from the Lord to lead His church in worship. It began with worship, and has continued to evolve into this incredible journey with the Lord.

God sometimes sends us down an unexpected path on the way to our goal—one that ultimately blesses us more than our original plan. Have you ever experienced such a “Divine Detour”?

Oh yes! He used the experience of starting a non-profit and doing worship events to really show me His desire and plan for my life. We would do events called Worship on the Square, and would sing, pray and have different serving non-profits come set up tables in town squares. The call was to the church to unite outside the walls of denominational lines as in John 17:20-23, Jesus’ prayer for us as believers to be one, that the world would see our love and unity as the Body of Christ and therefore know the Father.

The Lord used this to really show me what worship as a life truly was and is, the overflow of the heart. It was through the ending of the non-profit, that was a fight with the Lord to lay it down, and trust Him that it had accomplished all that the Lord meant it to, which ended up being the divine detour. He used the surrender, and me in my brokenness of what I thought was failure in some ways, to show me the path He had for me personally with worship and music. 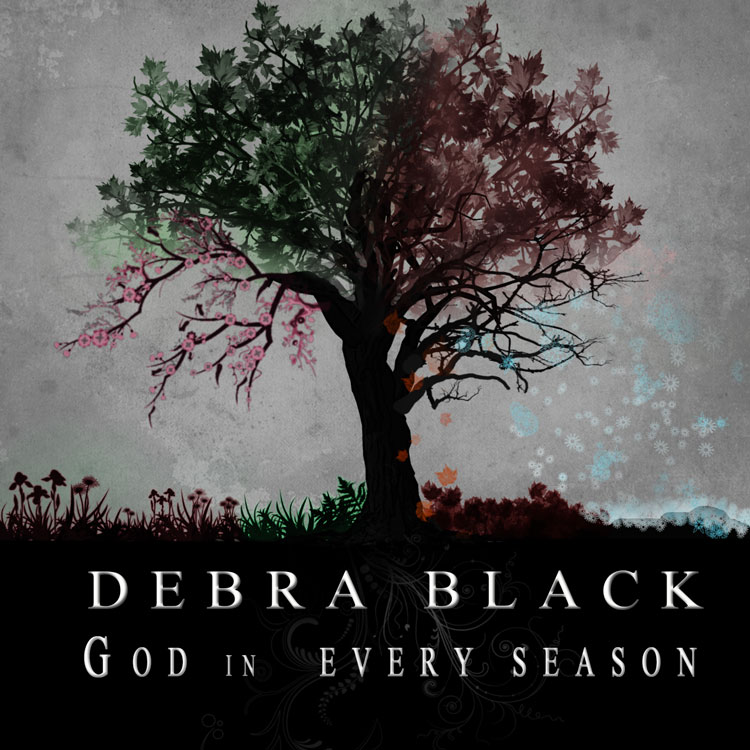 Let’s talk about your new album, God in Every Season (Debra Black Music, August 2014). How many of the songs did you write or co-write? What was the foundation song for the project?

I wrote More than Enough, and my producer was my co-writer for four of the other songs. I would say that the foundation song was God In Every Season. That was the song we began with and was the anthem I wanted to sing for this album. Freedom is another theme that is clearly in the album with two songs on freedom. But God’s faithfulness, and the fact that we can trust Him no matter what, was what I wanted to world to hear.

God often uses our work to teach us something. What did you learn (about life, faith, and/or even yourself) in the process of recording this album?

SO MUCH! Patience and God’s timing. I had no idea what goes into an album, which I’m glad because I probably would have just been overwhelmed to move forward. God did and continues to teach me trust. That it is a choice to trust God. I’m not going to wake up one day and “feel” like trusting Him, I have to discipline and will myself to. More than that I CAN trust Him; because He is faithful, true, and for me, not against me.

Love this question. Chocolate, hands down. There is just something about it that I just literally smile when I eat it and all is right and well in the world.

God Is Able by Priscilla Shier. SO good. I recommend it to everyone who is a dreamer, really just everyone.

I would say strong female lead. I tend to be a “get it done” kind of person, which makes the in between, waiting times hard for me. I’m very black and white. I know God has placed leadership over my life and honestly it took me a while to embrace it and accept it. I try not to fight it anymore and realize the Lord called me “for such a time as this…” it is about honoring Him, not pleasing the world. Ultimately I rely on His leading, but I am willing to follow and lead as He does.

I am the “cat lady.” Well, I just have one named “Lillie,” but I probably will be at some point the lady with cats. I love them, I think because they are so independent, which speaks a lot of my personality. But I find that I desire a little bit more love from her than she is willing to give… nevertheless, she I have accepted her personality and I love her very much. : )  I actually have the story behind how I got her on my blog on my website.

Thank you, Debra! It’s nice to have you at DivineDetour.

To learn more about Debra, logon to her website.

To purchase God in Every Season, logon to: