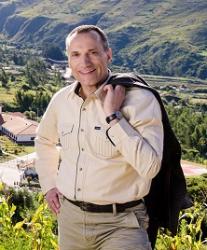 German-born Dr. Klaus Dieter-John has dedicated his life, and his Ivy-league training as a surgeon, to caring for the Quechan Indians of Peru, some of the world’s poorest people. About a decade ago, Dr. John and his wife established a state of the art medical facility, Diospi Suyana, in the Peruvian Andes. The miracles Dr. John has seen in the mountains of Peru inspired his book, I Have Seen God, originally published in Germany and recently released in the United States.

He and his wife, Martina, reside in Curahuasi, Peru.

What sparked your journey as a medical doctor?

As a teenager I read books by Paul White, an Australian doctor who served in Africa for two years and later went on to publish books on his experience as a “jungle doctor.” I was inspired by what he wrote and wanted to lead the kind of interesting and adventurous life he led as well.

In November 2005, I presented our vision to three directors of Telefonica, which is a large Spanish company in South America, and I asked them for a satellite dish. Ten years ago, we had neither internet nor cell phones in the town of Curahuasi where the hospital was under construction.

On December 19, 2005, I returned to Peru from a campaign in Europe. At midnight my digital projector which I had used to raise the money for our hospital was confiscated in customs. In February 2006, Telefonica notified me that they didn’t want to support our ministry with a satellite dish. In the same week, I learned that customs would not return my projector, despite the intervention of several people of great influence on my behalf. After learning I would not be getting my projector back, I decided to buy a projector in Lima for my next trip to Europe (I had forty presentations scheduled).

I entered a shop where they had three different models for sale. I connected my laptop to the projector and ran my presentation in order to check out the equipment. As I had finished a man walked up to me from behind: He asked me whether it was true that Telefonica wouldn’t help us. (I had already included a photo with the three directors of Telefonica and the German ambassador in my presentation.) The man was Dante Passalaqua, the president of Impsat-Peru, a competing company of Telefonica. They donated a satellite dish for internet and telephone lines, and have continued to make donations since 2006.

Impsat’s donation was covered in the leading weekly magazine of Peru (SOMOS) (somewhat similar to TIME magazine). This article and the story of Diospi Suyana, published in September 2006, reached one million readers in Peru. In my book, I mention several stories that have the same theme. We were in deep trouble so many times. We lost so much sleep and were very desperate. God never let us down.

There are so many great medical needs worldwide, but only a few doctors invest their entire lives to helping the less fortunate. As a matter of fact, statistics show there are only about 1,000 doctors who work as career missionaries, relying totally on incoming donations. In Europe and the U.S. there are approximately five million doctors total. So 1,000 is hardly anything compared to the need.

My time spent at Harvard University’s Massachusetts General Hospital and Yale University as a surgical resident opens doors for me when I travel around the world to share our testimony. For instance, I frequently have the opportunity to speak at secular universities, companies and charity organizations. Some people will take me more seriously when I talk about my faith in Jesus Christ if they know I’ve had success in the secular-academic circles from which they come. 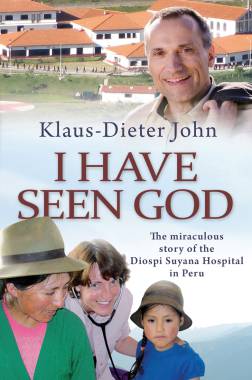 Let’s talk about I Have Seen God (Monarch Books, November 2014). Please tell us about it.

The book was first published in Germany, which, along with the rest of Europe, is really a postmodern and post-Christian culture. In Western Europe only four percent of people go to church. I wanted to share with the world the story of Diospi Suyana because it shows non-Christians evidence that God is real. It also encourages Christians of all denominations and nationalities you can experience God even in a globalized world driven by money and power.

I Have Seen God tells of how we were able to follow our dream to open a first-rate medical facility for the Indians of the Peruvian Andes, some of the world’s poorest people. The hospital’s name, Diospi Suyana, means “we trust in God” in Quechua, the native language of the people it serves. It is a testament to their experience that with God the impossible can happen.

What was the impetus for the title?

When I was a student some of my friends were atheists. After some of my long discussions with them, I would wonder whether God was real or if it was just wishful thinking on my part. There were also times when I felt afraid of death. One night I walked across a field. It was so dark and the wind was blowing, and I just shouted at the top of my voice, “God, where are you? I want to see you!” In the history of our hospital, God has answered my prayer and become very visible to me and to hundreds of thousands of people who have heard the story.

You travel worldwide, which means eating a lot away from home. What “home cooked” meal or comfort food do you crave the most when you’re away? Also, what Peruvian food has become a personal favorite?

Since I grew up in a German bakery, I always miss the dark German rye bread.

At home in Curahuasi, my wife cooks a mixture of German, Peruvian and European food. Since we have lived in many different countries, we adopted some eating habits wherever we went.

You and your wife, Martina, work together. How did the two of you meet?

I met my wife when I was seventeen and she was sixteen. Both of us shared exactly the same vision for our future: We wanted to get the best medical training available and then work as missionary doctors for the rest of our lives.

At the time, I had been elected president of our high school, and she was a leader of a group of girls at the school. It was through our interactions there that we fell in love. We also led a youth group together at our church and both studied medicine at Mainz University.

What Bible verse or passage best describes your faith journey?

Philippians 3:10 ~ All I want is to know Jesus Christ and to experience the power of his resurrection, to share in his suffering and to become like him in his death, hoping to be raised from death to life.

This verse has been my battle cry for at least thirty years.

Thank you, Dr. John! It’s a pleasure to have you as a guest at DivineDetour.

For more information about Dr. John and his work with Diospi Suyana Hospital, visit the hospital website.

To purchase I Have Seen God, log on to: