The Destiny of the Lamb 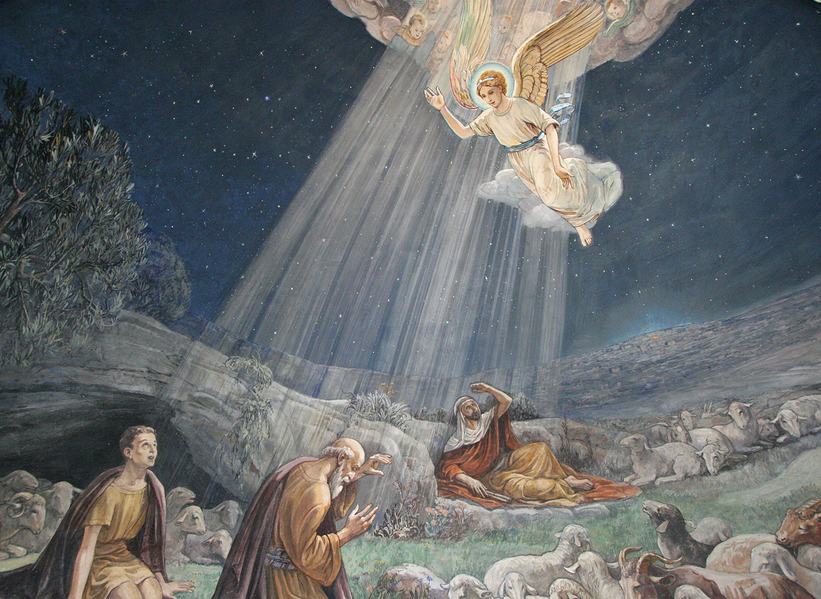 And there were in the same country shepherds abiding in the field, keeping watch over their flock by night. And, lo, the angel of the Lord came upon them, and the glory of the Lord shone round about them: and they were sore afraid. And the angel said unto them, Fear not: for, behold, I bring you good tidings of great joy, which shall be to all people. For unto you is born this day in the city of David, a Saviour, which is Christ the Lord. And this shall be a sign unto you; Ye shall find the babe wrapped in swaddling clothes, lying in a manger. ~ Luke 2:8-12 KJV

What picture comes to mind when you think about the shepherds on Christmas Eve?

Traditional carols suggest that the sky was clear at midnight, the shepherds were seated on the ground, keeping watch over their flocks. Quiet. Peaceful. Just another night “at the sheep pen.”

And then the angels showed up!

The glory of the Lord split the darkness of the night. An angel appeared with a message for the shepherds. And they were terrified.

Think about the impact the angel’s announcement had on the shepherds. A baby boy had been born. Christ the Lord. The Savior who would save all people from their sins. The Messiah! And they were the first to be told. Ordinary shepherds—often viewed as the outcasts of society.

But were they just ordinary shepherds? Based on the Mishna—a collection of traditional Jewish doctrine from before the 3rd century AD—some scholars believe these were temple shepherds. That the flocks they were tending near Bethlehem belonged to the priests and were destined to be sacrificed in the temple in Jerusalem.

One has to wonder if the shepherds understood the connection—that the child born that night would render the sacrifices of their flocks unnecessary? Or were they simply overcome by the awe of that glory-filled night. We know “they came with haste and found Mary and Joseph, and the babe lying in a manger. And when they had seen it, they made known abroad the saying which was told them concerning this child. And all they that heard it wondered at those things” (vss. 16-18).

It’s not inconceivable that some of these shepherds could still have been alive thirty years later when that baby in the manger was crucified on the cross for our sins. Did the fullness of what they had witnessed all those years ago finally sink in? We don’t know, of course. We can only imagine.

But as we celebrate Christmas, we do remember that the destiny of the baby born that night was the cross where He died for you and me—the perfect and final sacrificial Lamb. May we join with the “multitude of the heavenly host praising God, and saying:   Glory to God in the highest, and on earth peace, good will toward men.” (vss. 13-14)

HAVE A BLESSED CHRISTMAS!