Richard L. Mabry has accumulated a long list of accomplishments in life—including a brief stint playing semi-pro baseball and three years in Portugal as a Captain in the U.S. Air Force, where he earned the Air Force Commendation medal.

Since retiring from thirty-six years in the medical field—he’s a Doctor of Otolaryngology—he enjoys golfing, spending time with his family—and writing medical thrillers. 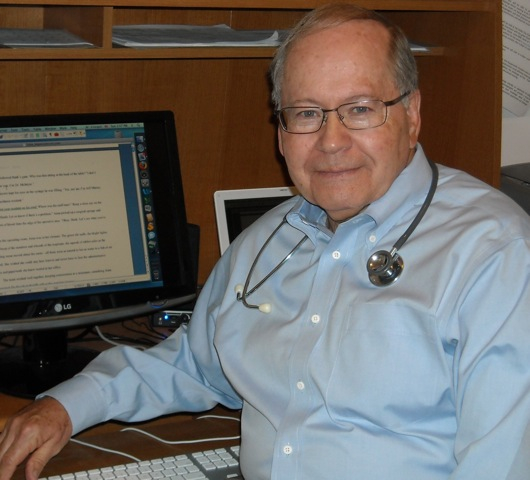 You’ve had a number of “careers.”  When did you realize that you also wanted to write novels?

Never, in my wildest dreams, did I think I’d write a novel. I sort of backed into it by way of trying to learn enough about the craft to do a book I had in my head after the death of my first wife. At my first writer’s conference, James Scott Bell and Alton Gansky inspired and encouraged me to try my hand at novels. After four novels and forty rejections, I decided to quit trying. That’s when God intervened and brought me back in touch with Rachelle Gardner, who’d gone from being an editor to an agent. Thanks to Rachelle’s guidance and Barbara Scott’s vision, Abingdon Press signed me. They just released my third novel, and the fourth will follow it this fall.

My books don’t have conversion scenes or altar calls in them, but I write from a Christian worldview, because that’s who I am. As the saying goes, I’m not perfect, just forgiven, and some of the mistakes my characters make are those I’ve experienced myself. But I try to show that, even when we turn away from God, He doesn’t turn away from us. When we come back to Him, we find He hasn’t moved at all.

Oh, so many times! One such experience comes immediately to mind. I was burned out with the private practice of medicine, and had always wanted to get back to academic medicine. I was thrilled when a friend offered me a position in his department at a medical school a few hundred miles from our home in Dallas. Unfortunately, the situation turned out to be less than optimal, so, with a heavy heart, I turned it down. Only a few weeks later, I was offered a position in Dallas that turned out to be tailor-made for me, and the ten years that followed were full of blessings for me.

Let’s talk about your new book, Diagnosis Death (Abingdon Press, April 1, 2011). Please tell us about it.

I was casting about for subject matter for my next book when, in the aftermath of Hurricane Katrina, a colleague and friend was accused of the mercy killing of a number of patients. Since I was the one charged with making the decision to remove life support when my first wife died, I was familiar not only with the mechanics but the strong emotions that accompany such a decision. I turned the matter over in my mind, prayed a bit about it, and awoke one morning with the plot arc pretty well in my mind. 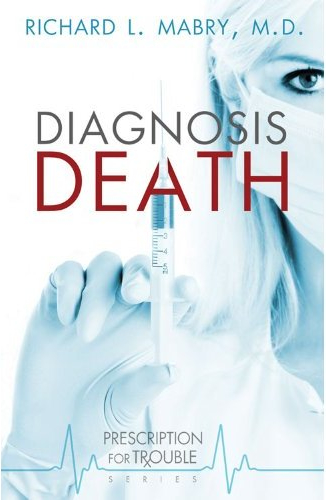 Here’s a tease for Diagnosis Death:

The threatening midnight calls followed Dr. Elena Gardner from one city to another, prolonging her grief. Even worse, they are echoed by the whispers of her colleagues—whispers that started after her comatose husband died in the ICU. When a second and yet a third mysterious death took place, the whispers turned into a shout: “Mercy killer.” What was the dark secret that kept Elena from defending herself.

Besides entertainment, what do you hope readers will take away from this book?

I try to write books that convey life lessons without hitting the reader over the head with them. My wife, Kay, made we aware of something Christine Tangvald teaches: every book should have a one-word theme. The themes for the three books in the Prescription For Trouble series are: for Code Blue, “deliverance” (Ps. 91:5); for Medical Error, “vindication” (Isaiah 54:17); and for Diagnosis Death, “renewal” (Isaiah 40:31). In this book, Elena Gardner is beaten down by the events of her life, things that have taken her away from God. But eventually, she experiences renewal on a number of levels.

You are also the author of a non-fiction book entitled The Tender Scar (Kregel Publications, 2006). What precipitated your decision to write it and how has it been received?

My first wife passed away in 1999 after fourteen days in a stroke-induced coma. Friends read the journaling I did as part of the grieving process and urged me to incorporate the material into a book to help others traveling that road. The result was The Tender Scar: Life After the Death of a Spouse. Since its publication over five years ago, the book has been in steady demand. It’s currently in use in numerous grief ministries, churches, and seminaries, and has ministered to many thousands of grieving individuals.

I’m glad I live in Texas, because I believe I could eat Tex-Mex food every day of my life and never tire of it: tamales, cheese tacos, enchiladas, quesadillas, and—my very favorite—chile rellenos. Why? No reason beyond the fact that it tastes so good. Matter of fact, the worst enchilada I ever had was still wonderful.

You have served as an interim music minister. Do you have formal music training?

My music training was rudimentary, but I’ve sung all my life. (I was also vaccinated with piano in childhood, but it didn’t “take.”) I’ve been fortunate enough to be in a few situations where I could step in and direct a choir, take charge of congregational singing, and in general keep things together until a full-time music minister could take over.

My favorite memory along these lines was the summer our church choir went to Paris, and the director inadvertently scheduled us at two churches simultaneously. I took half the choir plus our organist, he took the other half plus the pianist, and off we went. When the choir was introduced, I couldn’t understand what was being said—it was in French, of course—but at the end, the pastor turned toward the choir, then pointed at me and said something that ended with “Le Substitute.” So that’s been me a lot of times.

Who are some of your favorite music entertainers?

My favorite music entertainers? I’ll show my age by my answer, but I like the smooth sounds of Josh Groban or Keith and Kristyn Getty.

Mostly, I suspect, I’m dissonant. But given the opportunity, I play along with everyone else as a major chord.

I’m the short, chunky, near-sighted guy that everyone ignores until he saves the world from a speeding comet about to collide with us.

We don’t have pets at the house now, although we do have two “grand-cats” and a “grand-dog.” Earlier in our lives, both Kay and I had dogs—mixed breeds, mainly. My very first dog, as a child, was a wire-haired terrier named “Rags.”

Thank you, Dr. Mabry! It’s great to have you as a guest at DivineDetour!

For more information about Dr. Mabry’s books, visit his website at http://www.rmabry.com/.

To purchase Diagnosis: Death logon to: