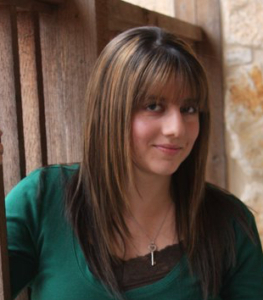 Erica Marie Hogan is 24-year-old author who has wanted to write ‘from as far back as she can remember.’ A home-schooled history buff, Erica began imagining stories at the age of ten. The Lost Generation is her debut novel from Elk Lake Publishing.

When I was a little girl, I always had a big imagination. Like most children, I loved playing make-believe. However, as I grew older, the stories I would recreate from children’s books or movies weren’t enough for me anymore. I had to put my own ideas down on paper. I had to create characters of my own with their own stories and journeys. I started when I was ten and have been writing ever since.

There have been many twists and turns, each of them shifting the plan for my life in their own way. Ultimately, my life always comes back to my dream of being a published author. So, I’d say, the greatest ‘plot twist’ in my life was the day I received an e-mail from the owner of Elk Lake Publishing requesting a book proposal. It was the last thing I expected! I am a member of ACFW (American Christian Fiction Writers) and at the time, I’d sent out an e-mail to another member who’d expressed their doubts about whether or not they were meant to write. I gave what I considered to be simple encouragement, but apparently my publisher saw something in what I’d written. I had no agent and no editor, but after I sent a book proposal, the publisher arranged for me to find both! I now have an amazing agent and was blessed to work with two very patient editors who helped shape my book so it would be ready for publication. : ) 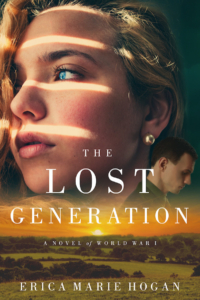 The Lost Generation is a historical fiction set during World War One. It is about three couples—one British, one Canadian, and one American—who all come together in different ways because of the war. They each witness the tragedy of the war through their own perspectives; some at home, some on the front lines. But all are deeply affected by the suffering and sacrifice of this brutal fight.

What led to your interest in WWI — and writing a story set more than 100 years ago?

I’ve been learning about WWI and WWII since I was eight-years-old. It started the first time my father let me watch the film Saving Private Ryan. Ever since I’ve been deeply moved by the tragedy of both wars. I was raised to respect our men and women in uniform and with a deep understanding of the sacrifices made during those troubling times. Ultimately, I was inspired to write about WWI because of something my father once said. He lamented that one day everyone will have forgotten the sacrifice made by the generation of 1914 that went to fight. Telling of their sacrifice through the eyes of my characters is my way of honoring them and keeping their memory alive.

As a debut author who has been writing for more than a decade, what’s your best advice to someone in need of encouragement with writing?

Writing is hard work, which is why you have to love it in order to begin. Be open with your future readers about your writing ability. Don’t be afraid to share what you write. Say a lot of prayers, have faith, and write because it’s fun. Don’t let fear get in the way of doing what you love. Writing improves with time, trust me I know, and if you keep at it, keep loving it, you will one day see the reward of your labors.

Oh goodness, that’s a tough question. My dream has always been to become a published author! It’s something I always had confidence I could do no matter any doubts others tried to put in my mind. I’ve been very focused on that my whole life. Nothing I ever considered doing really compared to my dream of writing stories. Honestly, it might seem a little funny, but my only other dream has been to adopt and care for stray dogs and cats on a very large piece of land. Kind of like the end of 101 Dalmatians. Pet farm! ; )

Do you have pets now?

I have two dogs and three cats! Rigby is a sheltie mix, Luther is a black & gray hound/Lab mix, I have two tabby cats Sam and Christal, and a mix (I’m not sure exactly what) black and white cat named Finnick. Rigby and Luther are energetic and feisty; the best of friends. My cats are moody, but affectionate when they want to be. Especially Finnick—the baby, yet biggest, cat—who sleeps against the back of my knees every night.

Jesus said to him, “If you can believe, all things are possible to him who believes.”

Immediately the father of the child cried out and said with tears, “Lord, I believe; help my unbelief!”

Lord, I believe, help my unbelief. This has been a phrase I’ve known since I was very young. My journey of faith has been a series of ups and downs that challenged me in every way anyone who believes can be challenged. I learned quickly that I had to search my own heart and listen for the Lord’s guidance to discover the kind of believer I wanted to be. Every time my faith was shaken, every time I’ve needed Him, I whisper, ‘Lord I believe, help my unbelief.’ Every time I do, I know everything is going to be all right.

Thanks, Erica! It’s nice to have you as a guest at DivineDetour.