Jocelyn Green is an award-winning author, freelance writer, and editor. The wife of a former member of the Coast Guard, she has written dozens of articles and several books to provide hope, support, and resources for military wives worldwide.

What sparked your fiction-writing journey?

But let me back up for a moment. Before my fiction-writing journey was sparked, I had already been a freelance journalist for several years, and had multiple award-winning nonfiction books under my belt. I have always loved fiction, but never thought it was something I could do.

Then in the fall of 2010, I was doing research in Gettysburg, Pennsylvania, for a nonfiction project called Stories for Faith and Courage from the Home Front (just released in June 2012, AMG Publishers). As I read the diaries, letters, and journals from the women who lived during the Civil War, the drama just came to life for me. I kept thinking, “This would make great historical fiction. Someone should write this novel.” I didn’t dream then that it would be me.

That was the inspiration. The opportunity came a week later when my publisher called to discuss a different (nonfiction) book contract, and then asked if I’d ever thought about writing fiction. I threw out some ideas based on the research I had just done, and that conversation led to a book proposal that was thankfully approved by the committees, and my fiction-writing journey was launched.

Faith (or lack of faith) is an integral part of who we are. I can’t imagine not including the spiritual dimension of my characters in their stories. Some of them respond to crisis by drawing closer to God, others allow crisis to be a wedge between them and God. So we get to watch their spiritual development as they get from page one to the end of the book.

Yes! When I married my Coast Guard officer husband we moved two days later from Washington, D.C. to Homer, Alaska. I thought my writing career had been short-circuited, because I gave up an editor job I loved on Capitol Hill, and I also had to withdraw my application to grad school for a degree in professional writing. But as I went through that year in Alaska as a Coast Guard wife, I was inspired to write a book of devotions for military wives. Three years later, and with the help of fourteen other Christian military wives, I had a book contract for Faith Deployed: Daily Encouragement for Military Wives (Moody Publishers, 2008). That first book opened the doors to subsequent books. So the Lord hadn’t cut off my writing at all—He just took it in a new and wonderful direction. 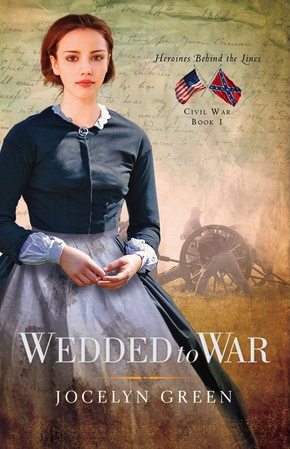 Let’s talk about Wedded to War (River North Fiction/Moody, July 2012). Please tell us about it.

It’s April 1861, and the Union Army’s Medical Department is a disaster, completely unprepared for the magnitude of war. A small group of New York City women, including twenty-eight-year-old Charlotte Waverly, decide to do something about it, and end up changing the course of the war, despite criticism, ridicule, and social ostracism. Charlotte leaves a life of privilege, wealth—and confining expectations—to be one of the first female nurses for the Union Army. She quickly discovers that she’s fighting more than just the Rebellion by working in the hospitals. Corruption, harassment, and opposition from Northern doctors threaten to push her out of her new role. At the same time, her sweetheart disapproves of her shocking strength and independence, forcing her to make an impossible decision: Will she choose love and marriage, or duty to a cause that seems to be losing? An Irish immigrant named Ruby O’Flannery, who turns to the unthinkable in the face of starvation, holds the secret that will unlock the door to Charlotte’s future. But will the rich and poor confide in each other in time?

How did you first hear about the real Civil War nurse who inspired your work of fiction? What drew you to her story?

I had seen her name in a book called Women at the Front by Dr. Jane Schultze, and I also read some of her first-person accounts of nursing after Gettysburg while I was doing research in the Adams Country Historical Society in that town. I was drawn to her in particular because of the contrast between what she gave up (a life of privilege and ease) and what she became as she learned to rise above hardships and make a real difference in the war. I also liked the fact that she and an old family friend, a surgeon in the Union army, developed a romance during the war and married a few months after the war ended. Together, they established one of the first nursing schools for women.

Please tell us a bit about upcoming books in the series.

The next book is Widow of Gettysburg, and as you can imagine, it encompasses what civilian women living in and around Gettysburg did during and after the 1863 battle. It also has subplots involving the free black communities of Gettysburg and Philadelphia, the first United States Colored Troops, and the first attempts at teaching newly freed slaves on some South Carolina islands.

The third book is Yankee in Atlanta, about a secret Unionist circle in Atlanta. We get to see how Sherman’s March to the Sea affects them.

The last book is Spy of Richmond, inspired by Elizabeth Van Lew, General Grant’s most valuable spy in Richmond. She was amazing, and you can read her story online by just searching for her name.

I love vanilla Greek yogurt with homemade granola and blueberries mixed in. Why? Because it’s cool and refreshing and my office upstairs in this 100-year-old house is hot in the summer time. Also, it’s packed with protein so I know it will be a long time before I get hungry again. Having to stop writing to eat is so annoying when I’m on a deadline! : )

I used to play and teach piano, but since having kids and writing, the only people who play our piano are my children. That’s terrible, isn’t it? I’d love to get back into it. But I sort of feel guilty doing anything that isn’t deadline- or domestic-related.

Great question. Can I combine a few of them? I would by the girl next door who mysteriously stays up in her office late into the night, living vicariously through the strong female lead she writes about.

We had a standard schnauzer growing up whose name was Detour! We named him that because we had to take three detours on our way to adopt him. Then we named other pets after road signs too for a while—a bird named Crosswalk, a duck named One Way—before we went back to the more traditional pet names. I got a Yorkshire Terrier puppy named Buttons for my ninth birthday and he lived until I was in college.

Thank you, Jocelyn! It’s a pleasure to have you as a guest at DivineDetour.

For more information about Jocelyn and Wedded to War, visit http://www.jocelyngreen.com/.

For information about Jocelyn’s non-fiction books, visit http://www.jocelyngreen.com/about/faith-deployed/ and/or http://www.faithdeployed.com/.

To purchase Wedded to War logon to: