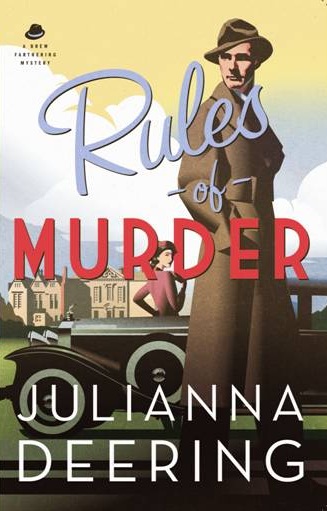 When multi-published, inspirational historical romance author DeAnna Julie Dodson decided to write a classic mystery series, she settled upon the idea of writing under a pen name to differentiate from her past work—and Julianna Deering was born. Rules of Murder is the first book in her new Drew Farthering Mysteries series from Bethany House.

Born and raised in Dallas, Texas, DeAnna never dreamed she would become a writer, but once she started writing, she couldn’t stop. And now she’s writing for two.

How did a business major in college end up writing inspirational novels?

Well, the inspirational part is easy. I’ve been a Christian since I was six. That’s the worldview I have, and I can’t imagine writing any other way whether I’m writing historical romance or mystery or fantasy. I think I started writing novels because I was a business major. You have no idea how boring accounting and business classes can be! I wrote to entertain myself. I never dreamed that I would ever show anyone what I wrote, much less have it published.

When and why did you decide to use a pen name?

As I mentioned above, I can’t imagine writing outside of a Christian worldview. Certainly, I have characters who aren’t operating from that perspective. Even those who are often fail. But the standard for truth in my stories is always Bible based.

Let’s talk about your new book, Rules of Murder (Bethany House, August 2013), the first in your Drew Farthering Mysteries series. Please tell us about it.

I had the best time writing Rules of Murder. I love the classic mysteries of the 1920s and ‘30s (Agatha Christie, Dorothy L. Sayers, and Margery Allingham to name my favorites), and I just couldn’t resist trying my hand at writing one. Plus I have been a huge fan of William Powell and Myrna Loy as Nick and Nora Charles from the Thin Man movies of the 1930s and ‘40s, and I was dying to create a couple like that. So I decided to mix the American and English whodunit traditions and ended up with Drew and Madeline.

Rules of Murder takes place in Drew’s country estate. There’s a murder at a weekend party and then another one. Drew and his best friend Nick Dennison, the butler’s son, decide to try tracking down the murderer themselves. American debutante Madeline Parker insists on helping them since her uncle (Drew’s step-father) is the chief suspect. We have secret passages and mistaken identities, sinister foreigners, ghosts in the night, romance, and everything else you’d want to find in a corking vintage mystery.

When I had the first book in my medieval series published (In Honor Bound), I thought I was on my way to a career as a novelist. After the third book came out a year and a half later, I didn’t get another contract. I was finally signed by my wonderful agent, Wendy Lawton, eight years later. It was another four years before I had a new book on the shelf. Not exactly the career path I had expected.

But that time period taught me a lot. I learned that I had to continue being faithful to do what God had called me to do. I had to keep writing and working and honing my craft. I couldn’t let disappointment turn into bitterness. I had to trust that He knew the right time and place for what He had given me to do. And, worst of all, I had to learn patience. Man, I hate that P word!

Mostly anything chocolate, but this time of year I have to have ice cream. Why? It’s tasty and it’s COLD.

I sang alto with my church’s praise team for a number of years and really enjoyed that. We had a lot of studio-quality musicians in the group, and I learned a great deal about music from them. I used to be able to play the piano, too, but it’s been so long since I practiced, I can barely play anymore. I wish I hadn’t let that go.

Hmmm . . . just one kind? I like too many different styles to just be one. But as long as it had an interesting harmony line, I’d be happy.

I guess I’d be the mysterious woman behind dark glasses. Only, there wouldn’t really be any mystery, just a homebody who likes her books and sewing.

Oh, we had lots of dogs when I was growing up. Actually, we had lots of everything: dogs, cats, birds, fish, turtles, rabbits, you name it. Since I’ve been on my own, all I’ve had is cats. They’re so easy to take care of. Right now I have three, Eloise, Elizabeth, and Petie. They’re all rescues, which I think are the very best pets. Eloise is ten. She’s solid black, very sweet and afraid of everything. Elizabeth, a silver tabby, just turned three. She’s very tiny, but she can be quite fierce if you upset her. Petie is my orange kitty. He will be a year old on October 1 and is finally growing out of the toddler stage. Sort of. I couldn’t imagine being without them.

Thanks, DeAnna! It’s nice to have you as a guest at DivineDetour.

Thank you for having me. I enjoyed it!

To learn more about DeAnna, visit her website.  For more information about the Drew Farthering Mysteries series, visit her Julianna Deering website.

To pre-order Rules of Murder and/or purchase other books by DeAnna, logon to: