At fifteen, two things happened which would shape Julie Cave’s future: she heard a creation science speaker at her church, which cemented her faith in God; and she finished writing her second novel-length story and realized she had fallen in love with writing novels. There were several detours on the road ahead, including law school, a science degree, and a “coincidental” meeting with the man who would introduce her to her U.S. publisher.

Julie’s second Christian thriller was recently released. She lives in Brisbane, Australia, with her husband and one daughter. 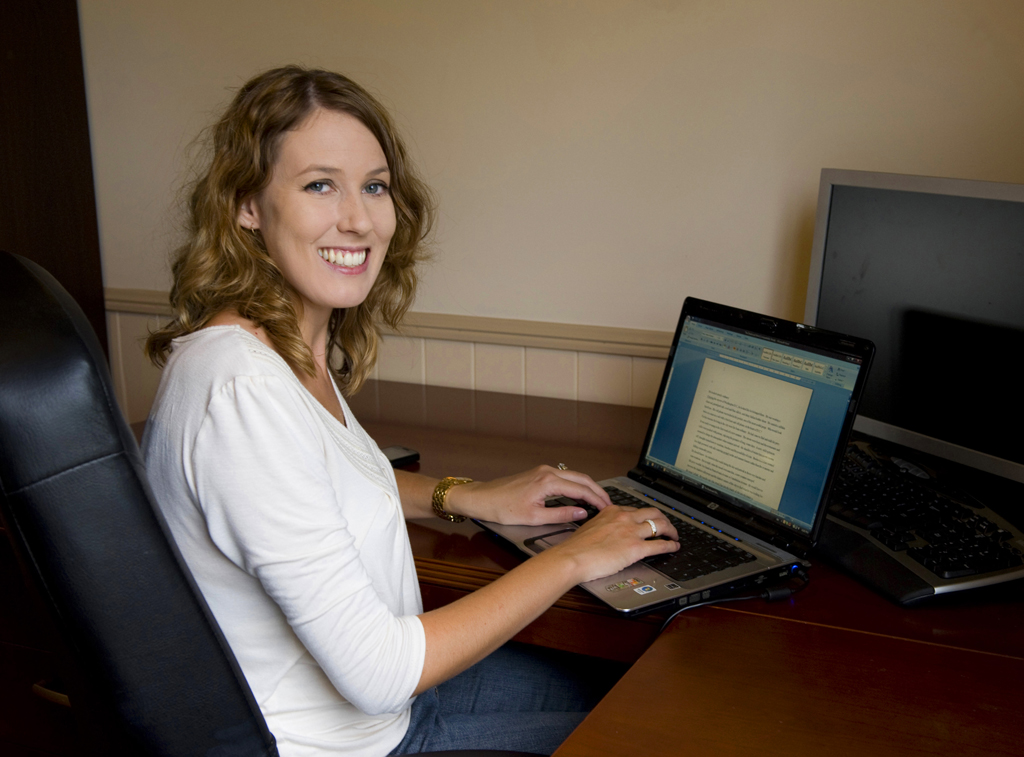 You had written two full-length novels by the age of fifteen. How old were you when you knew you wanted to be a writer?

I had started to write stories from the moment I learned the alphabet. Writing for me was as natural as breathing or eating! I don’t remember a time when I didn’t have a story bouncing around in my head waiting to be told. It’s hard to pinpoint an exact time that I considered writing to be a possible career, but it was in my teens as I continued to practice writing and continued to love it. During high school, I would come home and immediately begin to write on my computer whenever I could. I realized it was not a phase or a fad, and that this was something I genuinely loved to do. However, most of the time I still thought of it as a hobby, rather than a serious aspiration, and continued to do so right up until my publisher expressed interest in my first book!

Did you (do you) have other career aspirations? What would you want to do if you didn’t write books?

My other great love is the law, and I was completing a law degree when I was offered a contract with the publisher, and also found out I was pregnant with our daughter. If I wasn’t a writer, I could finish the law degree and work within the field. I have a great interest in justice for those without a voice in our society, and so I would probably find myself working in some capacity for that part of our community.

Prior to writing, I completed a science degree in public health and worked in banking and finance. My interest in the heady world of high finance has well and truly been satisfied; I have no desire to step back into that world. I am still interested in public health, particularly those in our community who suffer due to lack of funding, education, and opportunity.

My faith is the greatest driver behind my writing. I want to write books that are confronting and challenging and have the ability to make a difference in someone’s life. Fiction is often accused of being shallow and pointless; that is the opposite of what I hope my books portray. My ideas for writing come from current world events, and then I think about what God says about that issue in the Bible. That’s how I formulate my plots—I take a relevant issue, delve into how it affects people and families, and discuss what God says about that issue.

This experience is a good example of how God can use even acts of rebellion for His good. As a young woman, I turned my back on Christianity and decided to run my own life and do whatever pleased me. Part of this was dating and marrying a non-Christian man. My husband Terry had no background in Christianity and no desire to learn about it. It wasn’t until we had separated and were discussing divorce that I began to re-think my selfish ventures—they were not working out so well! At the same time, Terry sought the advice of a long-time friend who was a Christian. It became clear to us over time that the solution to our marital problems was God, and we both made the commitment to give our lives to the Lord. Now, funnily enough, this friend of Terry’s just happened to know a publisher who just happened to like the first draft of my first book. God certainly used my rebellious act of marrying a non-Christian for His glory.

Let’s talk about your new book, The Shadowed Mind (New Leaf Publishing Group, November 2010), the second in your three-book Dinah Harris Mystery Series. Please tell us about it.

The Shadowed Mind is a thriller set in Washington, D.C., and revolves around the hunt for a serial killer who is choosing victims based on their worthiness to live. Dinah Harris is an ex-FBI agent, new Christian, and recovering alcoholic who is tasked with helping the MPD find the killer. You will also meet Ella Barnett, a young woman struggling to care for her father who is suffering from Alzheimer’s disease. Over the course of the story, these two plots intertwine as it becomes clear the killer firmly believes in eugenics, the practice of “improving” the human race. The book discusses the topics of eugenics, euthanasia, and racism from a Christian viewpoint and points out the dangers of the worldly viewpoint in relation to these issues. 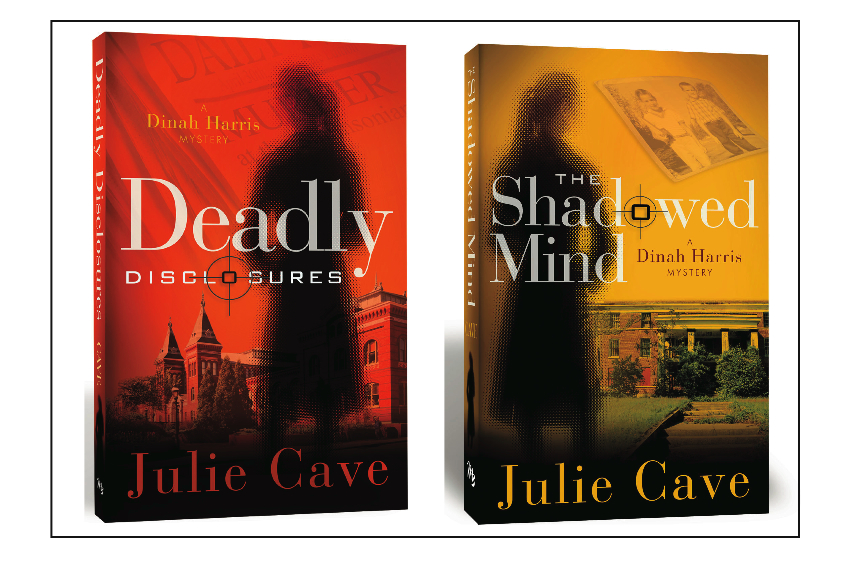 What sparked the idea for the first book in the series, Deadly Disclosures (New Leaf Publishing Group, February 2010)?

I have long been interested in the ongoing debate between atheistic evolutionists and Christian creationists (I am the latter). I saw a documentary by Ben Stein called Expelled: No Intelligence Allowed which reveals the extent of discrimination and harassment that exists in the academic and scientific world against those who don’t believe in evolution. I learned about Smithsonian staff members who were slandered and asked to resign; students who were refused PhD’s; and refusal of employment to otherwise qualified candidates simply due to a person’s refusal to believe that evolution is the only explanation for the origins of life. Some of those discriminated against weren’t necessarily Christian, but allowed for the concept of intelligent design in their thinking. Deadly Disclosures is about that discrimination, in which the Secretary of the Smithsonian disappears and is murdered because he dared to challenge the dominance of the scientific establishment.

You make your home halfway around the world from your United States-based publisher. How did you connect with them?

Through what would appear to be a set of coincidences, but what I know is God’s perfect timing. My husband Terry met a Christian guy named Steve, many years ago, more than ten years before Terry met me. Steve comes from a family passionate about upholding the authority of the Bible and his brother Ken is a well-known and multi-published author living in the States. Fast forward almost fifteen years, when Terry talked to Steve about his marital problems with me. Through Steve’s witness, we both became Christians.

Steve and I one day discuss fiction (he thinks it’s pointless, I vehemently defend it) and then he says, “why couldn’t a fiction book have some non-fiction teaching in it?” I say to myself, I could write something like that. We work on an outline together and then I write the first chapter. Steve, who is in the process of writing a book with his brother Ken, says he’ll talk to his publisher about it—but to keep in mind that his publisher has never published fiction before. Funnily enough, at about that time in the States, Ken is watching the popularity of Christian fiction such as the Left Behind series, and he remarks to the publisher that it would be good to tap into the fiction market. The publisher begins to think about that, and then gets the draft of my book on his desk. I think you’ll guess that the publisher liked what I had done, and the rest is history. You may know Steve and Ken, both of whom are in the States now—their last name is Ham, and Ken is the head of the ministry Answers in Genesis.

Strangely, a packet of chicken-flavored chips always works for me! Followed closely by a plate of hot fries smothered in gravy.

I should say that I used to have musical talent! I started the piano at five and moved on to the flute at eight, then the saxophone at fifteen. I played in a Christian orchestra and the school orchestra most of my high school years. In fact, the Christian orchestra cut a cassette tape (as it was in those days) and we recorded the songs over one weekend in a church auditorium. I am ashamed to say that I haven’t played any instrument now for ten years, though I keep meaning to get back into it.

I like rock of all kinds, except the heavy stuff. I listen to a variety of both Christian and non-Christian music—and I particularly like Casting Crowns, Coldplay, and U2 with some Australian bands you may not know, Eskimo Joe and Powderfinger.

I’d like to be a soulful rock song with lyrics that mean something—like U2’s Sunday Bloody Sunday.

Minor—quieter, less noticeable, less flashy, but that turns an ordinary song into something extraordinary!

The mysterious woman behind dark glasses who (if I’m allowed to elaborate) doesn’t say much, watches intently, listens closely, and solves the mystery first!

We have a dog named Sage, who is a shiba inu (related to the Husky family) and is six years old. She has beautiful golden fur and a placid, relaxed temperament. She is slightly obsessive-compulsive when it comes to playing fetch, but none of us are perfect!

Thank you, Julie. It’s a pleasure to have you at DivineDetour.

To view The Shadowed Mind book trailer, logon to: http://www.newleafpublishinggroup.com/product_info.php?products_id=874

To purchase Julie’s books from her publisher, logon to: http://www.newleafpublishinggroup.com/advanced_search_result.php?keywords=julie+cave&x=0&y=0

To purchase Julie’s books at other online retail stores, logon to: