Karen Barnett ~ Out of the Ruins 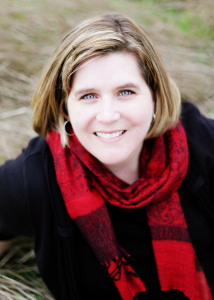 Karen Barnett grew up in Washington State and attended college at Valparaiso University in Indiana, followed by graduate study in Geosciences at Oregon State University. Fueled by a fascination for God’s creation, she worked in outdoor education for several years—as a naturalist at Northwest Trek Wildlife Park, a seasonal ranger at Mount Rainier National Park, and a Park Naturalist at Silver Falls State Park in Oregon.

Her debut novel, Mistaken, released in July 2013 from Abingdon Press. Out of the Ruins, the first book in her Golden Gate Chronicles series, released in May of this year.

Karen lives in the Pacific Northwest with her husband and two children.

After college, you worked in the “great outdoors.” What set you on a writing path?

I’ve always loved books and I dreamed of writing novels even when I was a kid, but I never took it very seriously until much later in life. I’d worked in parks and outdoor education for years, but when my husband and I were ready to start our family, I wanted a job where I could work from home. I thought writing would be ideal. I pictured the baby sleeping in a sweet little Moses basket by the computer desk while I worked at the computer writing my books. Everyone once in a while, I’d look down and smile, and the baby would coo . . .  Yes, I was pretty delusional! It wasn’t until my youngest was in kindergarten that I found enough time and energy to write. I’ve known moms who manage to nurse babies, homeschool older ones, run a home business, AND write. But that was not me!

I actually started out writing secular stories, but I had a hard time leaving my beliefs on the sidelines. It’s such an important part of my life, I had trouble imagining how a character could struggle with deep issues and not consider God’s role.

I met Christian author Robin Jones Gunn at a church retreat and dug up the courage to tell her some of my story ideas. She looked straight at me with her big blue eyes (if you’ve met her, you know what I’m talking about) and said, “Karen, that’s a faith story. You need to be honest about that. That’s a Christian novel.”

I went home and thought about it, and I realized she was right. I started over, embracing the faith aspect within the story instead of trying to skirt around it. From that day, I’ve never looked back. Now I can’t even imagine writing a novel where the characters didn’t wrestle with deep questions of faith. 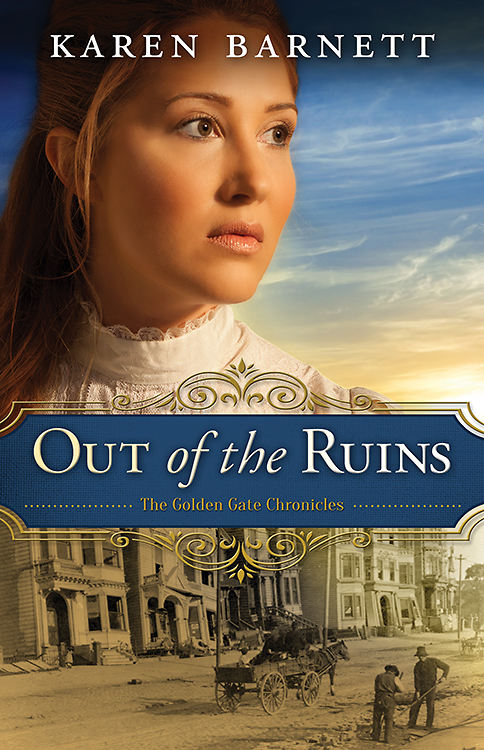 Let’s talk about Out of the Ruins (Abingdon Press, May 2014). Please tell us about it.

Out of the Ruins is a historical romance set in 1906 San Francisco.

While her sister lies on her deathbed, Abby Fischer prays for a miracle. What Abby doesn’t expect, however, is for God’s answer to come in the form of the handsome Dr. Robert King, whose experimental treatment is risky at best.

As they work together toward a cure, Abby’s feelings for Robert become hopelessly entangled. Separated by the tragedy of the mighty San Francisco earthquake, their relationship suddenly takes a back seat to survival. With fires raging throughout the city, Abby fears for her life as she flees alone through burning streets. Where is God now? Will Robert find Abby, even as the world burns around them? Or has their love fallen with the ruins of the city?

Though it’s my second published novel, Out of the Ruins was actually the first Christian fiction I wrote (see my story about Robin Gunn, above). I knew I wanted to feature the hymn, “Come Thou Fount of Every Blessing” in the story, but I was struggling to get the story on paper. I started and stopped writing several times in those early days, quitting every time it got difficult.

One night my husband and I had gone out to dinner, and he asked me how it was going. I told him I’d given up on the idea. It seemed like if it were God’s will, it should be easier, somehow. Wisely, my husband suggested we pray about it. On the way home from the restaurant, we turned on the radio and “Come Thou Fount” blasted through the speakers. We both laughed, but didn’t think much of it. On Sunday, our contemporary worship band played the same hymn. After that, I heard it everywhere—radio, television, even in the mood music in the grocery store. Eventually I took God’s hint and got back to work.

God never told me writing for Him would be easy, but He’s made it abundantly clear I’ll never be going it alone.

Writers love to write plot twists into their stories. But a writer’s life may have a few plot twists of its own. Some are Providential—“divine detours” written into our lives to bring about an unexpected blessing. Have you ever experienced such a “divine detour”?

I’d say mine is less of a divine detour and more of a divinely-avoided detour.

I went to graduate school at Oregon State University, but after one year of study I was discouraged and unhappy. As the year drew to a close, I was considering leaving OSU and attending a different school in pursuit of a teaching degree. That summer I took a job at Mount Rainier National Park, still unsure where I would be in the fall. In turmoil, I went out on a stormy evening and climbed to the top of a windy ridge. Against the roar of the wind, I yelled (and sobbed) my complaints to God. Sometime in the midst of my tirade, God quieted my heart. I came back down the trail with a strong sense that He wanted me to return to OSU, and He had a specific reason.

Even though the decision still felt wrong, I decided to trust God’s leading. Within the first few months of the new school year, I met Steve—a wonderful new student in our department. He eventually became my husband.

Every once in a while, I wonder what life would have been like if I hadn’t listened to God’s leading that day. I’m thankful He was patient enough to listen to my tantrum, but firm enough to point me back in the direction He had laid out for me.

I don’t know if you’d call it a comfort food, but I often bribe myself with peanut M&Ms. I’ll dole out one for every hundred words. Usually a few M&Ms into the story, the words are flowing again.

I’ve played guitar since I was a teen, and sometimes I lead worship for our church’s women’s retreats and children’s ministry. I also play a bit of hammered dulcimer, mandolin, and Irish tin whistle. In fact, I keep the tin whistle near my computer and sometimes I pull it out when I need a short writing break. I have an Irish character in my next novel, Beyond the Ashes, and I think he came about because of all the Irish jigs and reels I was playing.

I’d probably be a song from a musical. I love the idea that you could be walking along, living your life, and suddenly you burst into song. My husband and I are both in the habit of belting out songs at odd times. Our kids have gotten used to it, but their friends probably think we’re pretty strange when they come to visit.

I’m definitely the little girl trying to walk in high heels. I always loved playing dress up and pretending I was someone other than myself. I think that’s one of the reasons I enjoy storytelling—I get to make up imaginary friends.

I love all kinds of animals, but I’m particularly drawn to hard-luck cases. Our cat Oreo was a stray that arrived on our doorstep with a horribly mangled face. After paying for emergency surgery, we figured we couldn’t just send him back out on the street.

Ty is a gray tabby we inherited when my mother-in-law passed away. She’s very shy around strangers and will disappear whenever anyone’s about.

Our newest addition is a dachshund mix named Mystery. I’d never had a dog before, and frankly didn’t think I wanted one. My husband loves dogs though, so when some friends needed a temporary home for a doxie puppy, we volunteered. It was love at first sight for both Mystery and me. Things never worked out for her to return to her first home, and we were fortunate to become her forever family. I’m so nuts about her, she has her own Facebook page.

Thank you, Karen! It’s nice to have you as a guest at DivineDetour.

Thanks for having me, Kathy!

To purchase Out of the Ruins, logon to: