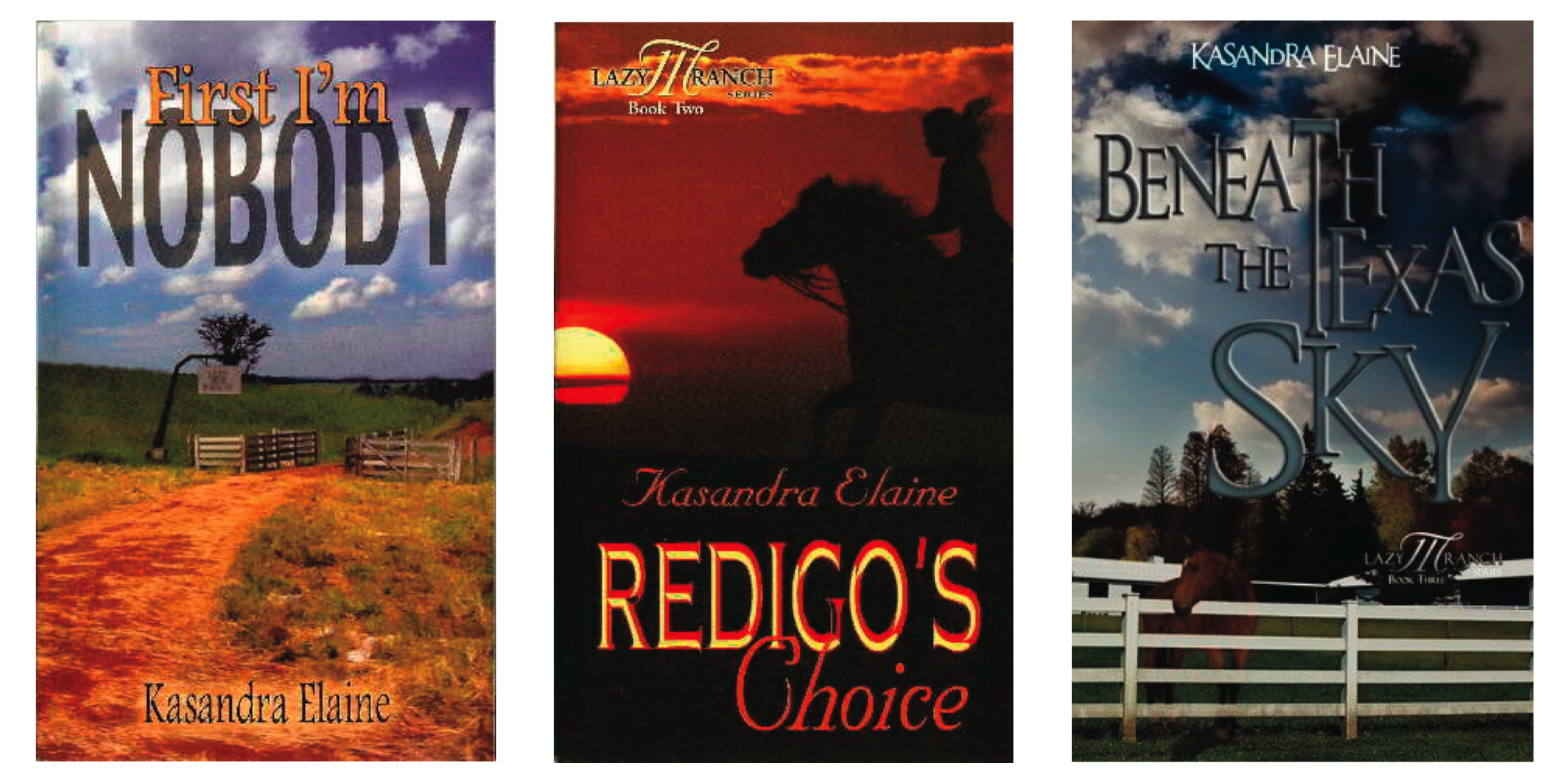 Welcome, Kassy and Elaine! It’s great to have a writing team at DD. Please tell us about your series.

Kasandra Elaine: THE LAZY M RANCH SERIES is a set of contemporary inspirational romantic suspense novels set on a thoroughbred horse ranch outside of Denton, Texas. The romantic leads change in each of the three books, but the characters the readers meet in First I’m Nobody continue to appear and support one another throughout the series. Being romantic suspense, we do have to have a solution to the suspense, so our series has a strong secondary character, Clayton Carlisle, who is a “retired” Texas Ranger. Clayton is called upon to “organize” things.

Kassy: Faith is the foundation for everything I write. It is my ministry. God didn’t mean for me to be a preacher, but He gave me a writing talent. It is my prayer that anyone who reads my writing will meet Jesus in whatever way that person needs.

Elaine: If it weren’t for my faith in Jesus, I wouldn’t write. Like Kassy, I pray that my readers will see Jesus in whatever we write as a team or I write solo.

Please tell us about your personal writing journey. How long have you been writing?

Kassy: I began “writing” as a child. I would create stories in my head as we traveled between our home in East Texas and my relatives’ homes in the Dallas area. I spent long hours riding my bicycle alone and often used that time to daydream. Sometimes these were new episodes for a TV series I watched, and at times they were how I would have written the ending of a book I had read or a movie I had watched. I began putting words on paper during college, but never got very far because the process was too slow. The computer and word processing software with its “cut and paste” ability opened up the world of writing for me. Elaine and I actually first collaborated during our senior year when we wrote a Christmas play for church.

Elaine: I have always had a vivid imagination and felt that I had at least one book in me. As Kassy mentioned our first effort as a team was a Christmas play when we were in high school. As a kid I made up stories in my head all the time. I guess that came from playing by myself a lot.

Kassy: I would have to say Elaine has influenced my writing career the most. If it weren’t for her, I might not have had the confidence to believe I could become published. I do have some genetic heritage, my father was a journalist working for several newspapers including the Dallas Morning News at the beginning of his career.

Elaine: God. It’s a talent He gave me and Him I want to serve. My mother would be second. She was my biggest fan and when she read my work, and our work, and liked it I knew it was the right path. Believe me, she would have told me if she didn’t like it. She was an avid reader, especially of Christian fiction.

Kassy: The few major detours in my life have simply made me a stronger person, reinforcing the knowledge that with Christ we can come through any battle. That doesn’t mean we won’t have scars and it won’t be difficult to go through, but we will come out on the other side better for the journey.

Elaine: Where would I began, they are just too numerous to tell. But as Scripture says, He works all things to the good for those that love Him and are called according to His purpose.

How long have you been writing together? How do you divide the duties and work systemically toward the final draft?

Kasandra Elaine: We began writing together in March of 1997. We had read and shared a great number of books over the years and had commented that we should write together. Elaine got the idea for a novel of her own in January and began writing it. In February, she shared it with Kassy. She had come up with a second idea designed to be written by the two of us. We started that project during Kassy’s spring break.

Elaine usually begins our projects. We discuss them and plot them out together mostly over the phone or during a vacation we take together. Since 2001, we have been sending files back and forth via email because we live 150 miles apart. We both contribute through all phases of a project’s development. When we first started writing together, most writing partnerships consisted of a researcher and a creative writer. We were different; we both created. We “research” as necessary and as little as possible. : )  Elaine is better at writing the queries.

The main disadvantage of writing as a team for us is the difference in our writing speeds. Elaine will put two to three times as many words down on paper in the same amount of time spent as Kassy does. We’ve learned to work on different projects at the same time to relieve the stress when we’re working in the same space at the same time.

The advantages of writing together are that we each usually do only about half the work. If we run into a snag, there is an automatic brainstorming partner to consult. Or we simply send the file to the other one and say, “Your turn!”

Any other collaboration in the works?

Kasandra Elaine: We have several projects in various stages of development. Some are romantic suspense and we have started a series of cozy mysteries. We’re having a tough time finding a “home” for the cozies since very few CBA houses publish cozies. Those that do usually want them submitted through an agent, which we don’t have at the moment. It’s a shame, too. Edna and Klara are some pretty feisty middle-aged sleuths. Any recommendations?

Kassy: Tortilla soup from Posados, a local Mexican food chain, when I can get it. Or Alberts Hot Sauce and tortilla chips. Alberts is also a local creation of the East Texas area which has spread to a larger area than where it originated in Kilgore.

Kassy: I took years of piano lessons. I learned to play clarinet and was in a school band from the sixth grade through the first two years of college, but as they say, “If you don’t use it you lose it” and those skills have fallen by the wayside. I love singing, spending the final years of college in a Baptist Student Union choir. I sing while I drive (usually to the radio or CDs) for my own pleasure. I usually sing in the church’s Christmas cantata, but I’m by no means a soloist.

Elaine: I sing. I love to sing. I love it more than writing or anything else. I do sing at my church and sometimes I am invited to other churches to sing. My dream has always been to be in music ministry full time but for some reason that has not occurred yet.

Kassy: As a child of the ’50s and ’60s, I love that era of music—The Lettermen, Glen Campbell, The Association, Mamas and Papas, and John Denver are among my favorites. But I also love other genres of music from classical, including some opera, to country/western. I grew up watching old movies and love the Big Band era music as well. Just about the only types of music I don’t listen to are hard rock and rap.

Elaine: I love southern gospel, the oldies (anything from big bands to ’50s and early ’60s). I like the old country music, and I do like western, the kind the Sons of the Pioneers sang.

Kassy: I would be a romantic ballad with an orchestral background.

Kassy: I would say that I’m a major chord.

Kassy: LOL. The answer depends…within my own family I’m the strong, female lead, but within my friendship with Elaine I’m the BFF girl next door.

Elaine: The strong female lead because most of my adult life that’s what I’ve had to be even though it wasn’t necessarily my choice. 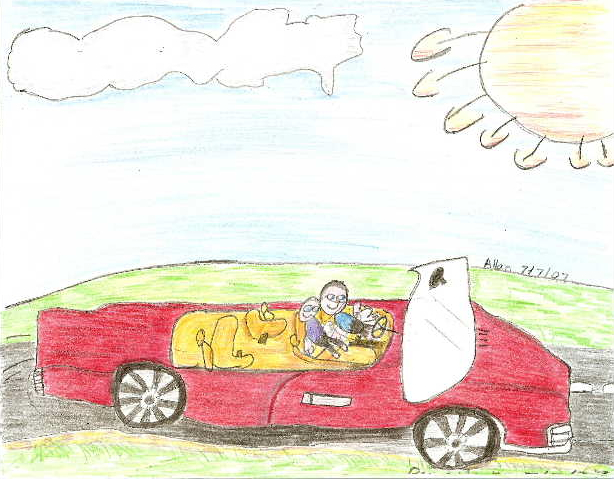 Please tell us about your pets, your hobbies, your family, etc.

Kassy: Currently, I’m the caretaker of a solid, black shorthaired female cat named Vader who lives indoors with my sister and me. Krissy has a medium-haired tortoiseshell calico named Frosty. Living outside our house are between five and eight feral cats that we feed. Don’t call the SPCA on us; they eat better than we do! Of course the cats aren’t the only creatures taking up residence around our house. There are a couple of raccoons and an opossum or two who love the cat food we put out. The squirrels and birds residing in our trees are too numerous to count.

I’m also a quilter with a room full of fabric and sewing machines. Traveling to sparsely populated areas of the U.S. (especially Wyoming) and reading are among my other favorite things to do.

I’m the oldest of four daughters born to Sam and Dorothy Paris, who both now reside in Heaven. Besides my three sisters and two brothers-in-law, I have three nephews and four nieces, and four great-nieces and two great-nephews. Since I never had any children, Elaine kindly “shares” her granddaughter and grandsons with me from time to time.

Elaine: My hobby is writing and traveling. I am the mother of two beautiful daughters. My oldest daughter lives in Heaven. She had Cystic Fibrosis and was a double lung transplant patient; her book is in the works. My youngest daughter is wonderful. She is married to a terrific fellow and they are the parents of the three most terrific children in the world. My only granddaughter is a senior in high school this year (telling my age here), and a great human being. She still likes me. The oldest boy is a freshman this year. He has cystic fibrosis but is doing great. He is excited about being in FFA this year and raising a pig. The youngest is in eighth grade and just loves life. He’s the comedian of the group and just rolls with the flow.

Thanks, Kassy and Elaine! 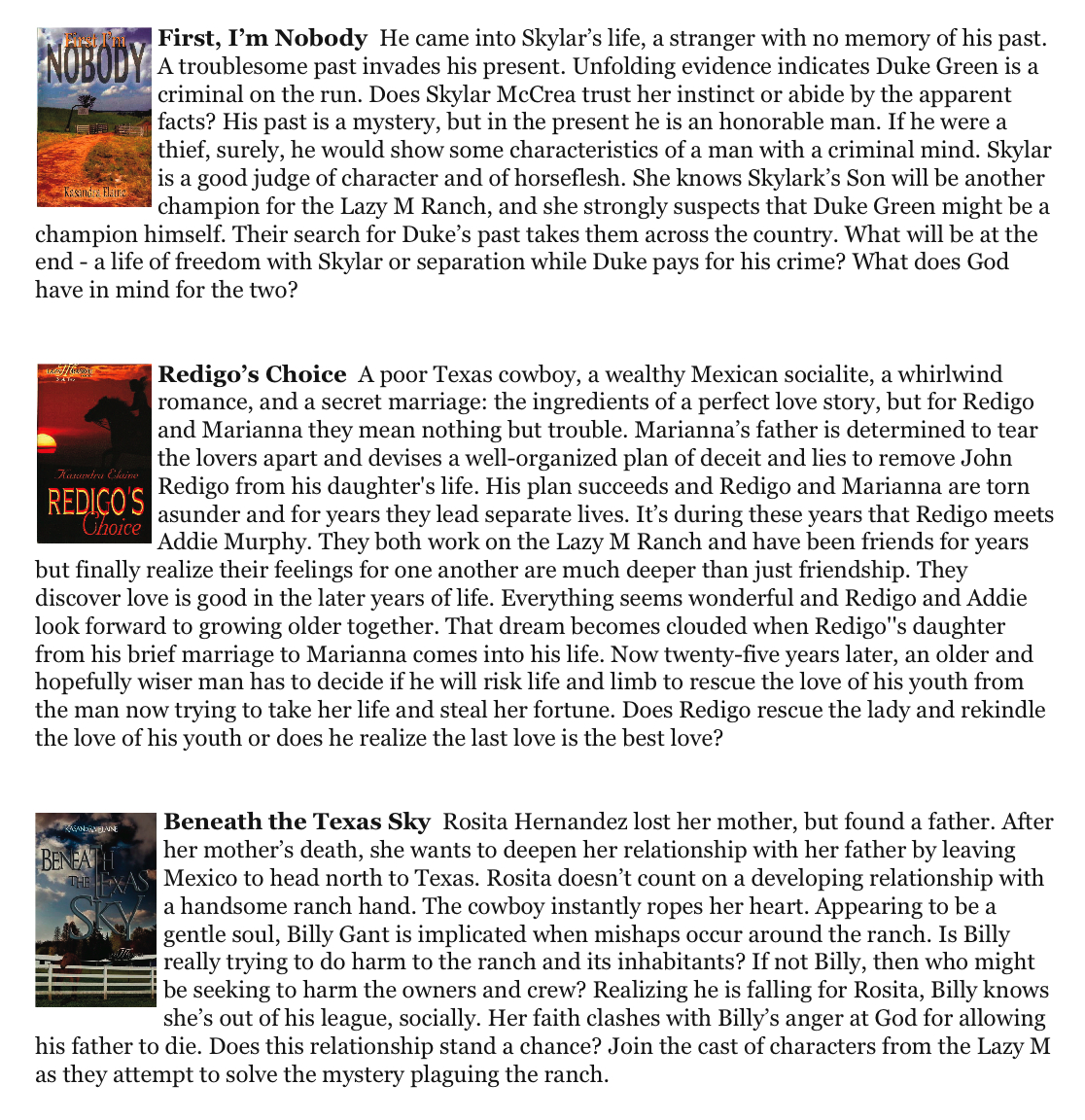 For more information about Kassy and Elaine and their books, including Elaine’s solo project, Sonora, logon to www.kasandraelainebooks.com.

To purchase The Lady M Ranch Series in e-book format logon to either the White Rose Publishing site or for Kindle logon to www.Amazon.com (http://www.amazon.com/s/ref=ntt_athr_dp_sr_1?_encoding=UTF8&sort=relevancerank&search-alias=books&field-author=Kasandra%20Elaine).