The bestselling author of forty-five novels, Kathleen Y’Barbo has more than a million copies of her books in print. She is a multiple Carol Award and RITA nominee and has been twice nominated for a Career Achievement Award and a Reader’s Choice Award.

A tenth-generation Texan, Kathleen is a proud military wife and currently an expatriate Texan cheering on her beloved Texas Aggies from north of the Red River.

You have studied and/or worked in several fields and traveled to a number of places. How does all of that come together into your writing?

Sometimes it means that I put in a character who has a legal background (I am a paralegal), and other times it may mean that I have a character discussing experiences in Singapore, Jakarta, London or Paris. I just finished the third book in the Secret Lives of Will Tucker series, and I was able to include a Scotland Yard inspector who was raised in London but had an American father. That was fun.

Yes He has, in the form of a tall and very handsome Air Force guy who I hadn’t seen since we graduated high school back in the 70s. Through a set of circumstances only God could have orchestrated, we were reunited in the summer of 2010 and eloped to Hawaii four months later.

Marrying again after seven years of singleness and moving from Texas to Oklahoma was DEFINITELY a detour I never saw coming. And yet, I am so very glad it happened.

I write from a Christian viewpoint, meaning that I am a believer in Jesus Christ and see the world through that perspective. Some of my novels have a strong faith element while others are written with a less obvious thread. In both cases, however, it is my hope that readers will see God glorified through the stories I tell. 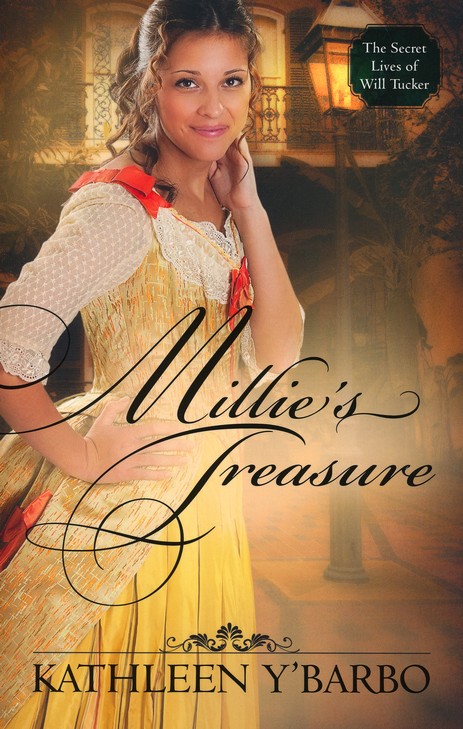 Let’s talk about your new book, Millie’s Treasure (Harvest House, August 2013). Please tell us about it.

Writing Millie’s Treasure was so much fun! Originally, I had a completely different story in mind for the second book in the Secret Lives of Will Tucker series. When my editor read the first book, Flora’s Wish, she asked if I would write the story of the hero’s best friend instead. Of course, I was happy to oblige.

When he’s not chasing bad guys, Pinkerton Agent Kyle Russell is an inventor who has patented a number of devices that help him in crime fighting and elsewhere. Thus, the book has somewhat of a steampunk feel (think Wild, Wild West the tv show). When he meets the heroine, bookish heiress Millie Cope, he is testing out a personal flying device on the roof of the Memphis Cotton Exchange Building. Suffice it to say that this was the first time I have ever written a book set in 1889 that begins with the couple flying over the rooftops and the Mississippi River as the New Year begins.

Millie and Kyle both end up on the trail of the elusive Will Tucker, Kyle because he is bound by his job as a Pinkerton agent to return him to prison and Millie because he has stolen a valuable piece of the puzzle that she hopes will lead to hidden treasure. Along the way, this pair of stubborn scientists must learn to work together to catch Will Tucker and solve the cryptogram that is the clue to the treasure map without falling in love. Of course, they succeed with the former but fail miserably with the latter.

What happens when two scientists use a plethora of not-yet-patented gadgets to solve a crime and a cryptogram? They find treasure, but not the one they’re expecting. Combine crime fighting, cryptology, and the Louisiana pirate Jean Lafitte’s lost treasure, and you get Millie’s Treasure!

God often uses our stories to teach us when we’re writing them. What did you learn (about life, faith, and/or even yourself) in the process of writing Millie’s Treasure?

I learned so much! Writing this intricately plotted story was a challenge, but I learned that I love challenges. Between getting the history right and making sure the characters lived out their faith walks, I spent a lot of time working on the story line. The characters had to learn to trust God no matter what, something I also have to remind myself to do.

I read that you’re good at writing under pressure. What’s your secret?

Focus. It’s that simple and that difficult. When I am writing, I focus on writing. I am keenly aware of the need to have a manuscript turned in on a certain date, so that is always in the back of my mind, but when I am working on a story, I focus on the story and not on other things that could easily distract me from that goal. Sometimes that means I use software to block the internet so I have no temptation to amuse myself on Twitter or Facebook. Other times, I race against the clock or catch a friend online and see which of us can write more words in a specified length of time. There are all sorts of tricks, but the main thing is, I stay focused on the goal.

Mushroom risotto is a favorite, but I don’t always have the ingredients on hand, nor do I need the calories. Still…

No! My musical experience, beyond playing the flute from seventh to ninth grade, is limited to singing in the shower and in the car. I am quite accomplished at both.

Depends on the day. Some days I’m a praise song. Other days it’s a Vivaldi sonata or maybe something by Stevie Ray Vaughan or Joe Cocker.

Can I be all of the above, because at different times in my life, I have?

We currently have a Miniature Schnauzer named Baxter and a fat orange tabby cat named Baby. They are my office assistants although I have yet to figure out what they do besides sleep and give me that our-food-bowls-are-empty look.

Thanks, Kathleen! It’s great having you as a guest at DivineDetour.

To purchase Millie’s Treasure logon to: