Merrie Destefano has lived a number of lives—from magazine editor (Victorian Homes, Cottages & Bungalows, and Romantic Homes), to marketing professional (Focus on the Family, The Word for Today, and PJS Publications, now Primedia), to graphic artist. Born in the Midwest, she now resides in Southern California with her husband and Joshua, Caleb and Hezekiah—the family pets.

Her debut novel, an urban fantasy entitled Afterlife, was released a few months ago (Eos/HarperCollins, August 2010). 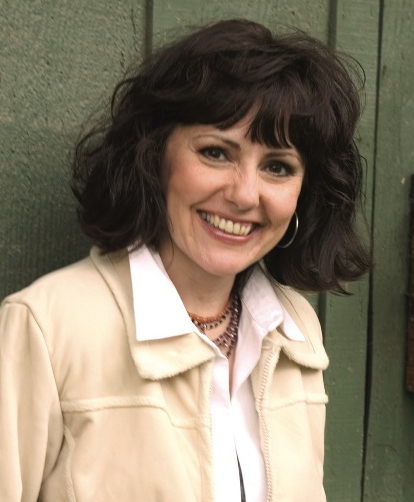 You are gifted as both a writer and graphic artist. Was there ever any doubt you would choose a “creative” career? Did you know as a child that you wanted to be a writer?

From the time I was a child, I wanted to be an artist when I grew up. I enjoyed writing too, but my first passion was art. In eighth grade, I had an English teacher who was very supportive and encouraged me in my writing. Oddly enough, I felt like I needed to choose between writing and art, so at a very young age I choose art. Later, when I was in my twenties, I started writing again, but never got anything published. So basically, the first half of my life was devoted to fine art and now, the second half of my life has been devoted to writing.

Have you always had an interest in fantasy and science fiction?

Yes! When I was very young, I read every fairytale I could find—although, the fairytales back then were quite a bit different from what children read today. For instance, the original story of Cinderella involves her sister cutting off part of her own foot as she tries to squeeze into the glass slipper. Then, later I read books written by Ray Bradbury and Robert Heinlein and J.R.R. Tolkien. And you have to realize that I grew up watching Star Trek and Lost in Space and Twilight Zone and The Outer Limits.

You have a background in both print and broadcast media. What was your first job in the industry and how did it come about?

My very first job was as a paste-up artist at a small newspaper in Washington, Illinois. I had majored in Fine Art in college and had taken a one-year course in Graphic Art at a local vocational school. From there I went to a larger newspaper and from there to a magazine publisher. I didn’t cross into the editorial side of publishing until I developed carpal tunnel about ten years ago.

Oh, my gosh, that’s happened to me so many times. The most recent time was about a year and a half ago, when I got laid off from my full-time job as the editor of Victorian Homes magazine. Surprisingly, God prepared me for it. He actually gave me a dream about two-three months beforehand; in the dream someone told me that I wasn’t going to be the editor at VH much longer and that what I was going to be doing would be much better. After that dream, my husband and I started saving about 30 percent of my salary. So when the actual event came, we were prepared both emotionally and financially. The day I got laid off, I quickly sent out e-mails to everyone I knew, telling them what had happened. Before I left work that day, a friend offered me a freelance job, editing an art book.

At that point, after more prayer, I decided that this was going to be the year that I really pursued getting my novel published. I already had Afterlife written, and I already had an agent. About four months later, my agent sold Afterlife to Eos/HarperCollins.

Weird funny detail: My main character is a jazz musician and I listened to Coldplay while writing the book. Coldplay was touring nearby when I found out that my book sold. So my husband and I celebrated by going to see the band. It was such a perfect night! Very surreal. Sitting and listening to the band that gave me inspiration while I wrote my book, knowing that one day someone else might read my book and be inspired by it—that’s how art is. One piece inspires another. I feel incredibly blessed to be here right now, to be published in a season when so many companies are being downsized. I feel like Joseph in Genesis, Chapter 50, where his brothers meant something for evil, but God meant it for good. 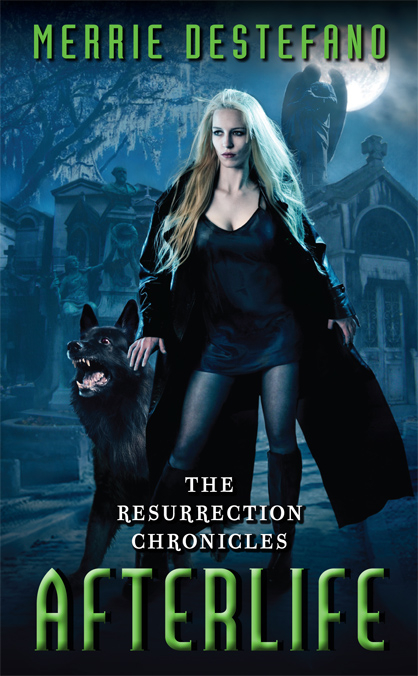 Let’s talk about your new book, your first novel, Afterlife (August 2010), a general market release for Eos/HarperCollins. Please tell us about it.

Afterlife is basically a cautionary tale that deals with our quest for immortal life. It takes place in a near future New Orleans, in a time when we have developed the technology to resurrect instead of die. The main character, Chaz Domingue, is a Babysitter who guides people through that rough first week after resurrection. His current Newbie—a person who has just resurrected—is a young woman who can’t remember her previous lives. Unbeknownst to either one of them, a dangerous secret lies hidden in her subconscious mind, and there’s a powerful organization who will stop at nothing to get that information.

What was the inspiration for the story? Besides providing entertainment, what do you hope readers will take away from it?

The inspiration for the story came from an article I read several years ago in a scientific journal. Apparently, many scientists believe that if we could find a way to lengthen the telomeres in our DNA, then we might have discovered the key to immortal life. I took that idea and built a world around it, based on the assumption that we had already developed that technology.

What’s your next writing project?

My next book will come out in June, 2011, and it’s called Feast: Harvest of Dreams. I’m finishing up the copy edits right now. We have a cover, but I don’t have approval to show it yet. I’m not sure if I’m supposed to talk about the story yet either—although, it’s not a sequel to Afterlife. And I’m actually working on my third book right now. I took a short break after turning in my second novel this summer and started writing a YA book. I’ve got about 100 pages left to write and, so far, I’m really enjoying it. I also have a 16-year-old character in Feast, so that book could appeal to the YA audience as well. In fact, none of my books have anything in them—strong violence or sex or bad language—that would preclude them from being read by a teenager. All of my books fall into the fantasy/science fiction categories. 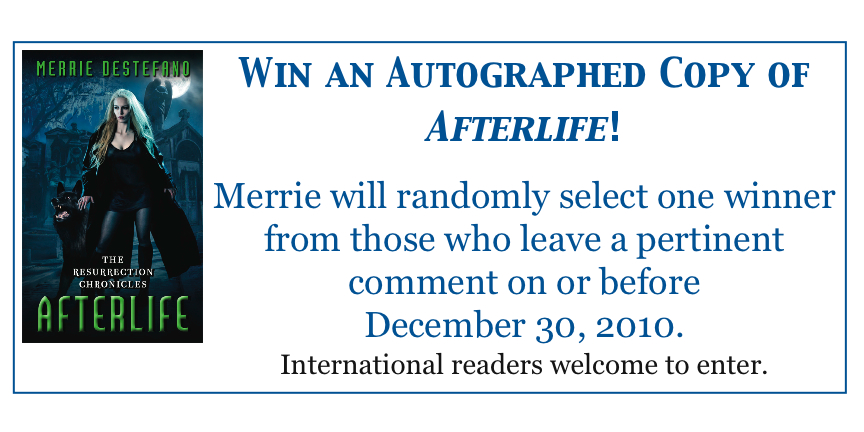 I would rather celebrate with my favorite food and it is: Taro sugar-free frozen yogurt. Double yum! When words aren’t flowing, food doesn’t help.

This website features writers as well as musicians, so I like to mix it up a bit. Do you have musical, as well as literary and graphic, talent?

Unfortunately, no. In fact, once I got so depressed because I had no musical ability—at that point in my life I thought music was the highest, purest form of art—that I gave up all my artwork for an entire year. Then, while cleaning our spare bedroom one day, I pulled out some of my sketchpads. I leafed through them and then started crying because I realized that I did have a valuable talent.

I would dream of being a Coldplay song—something like White Shadows or Speed of Sound or Moses. But, alas, I would probably be a catchy, slightly upbeat song by some no-name boy band.

The strong, female lead (I mean, it is my story. Why would I cast someone else in the main character’s role?) But I also happen to live next door, occasionally wear dark glasses and imagine that I am a superhero. And I never wear high heels. Ever.

I’m a dog lover—and I know you are too. Please tell us about your pets. Did one of your dogs inspire Omega, the canine character in Afterlife?

Yes, my rescue dog, Joshua, was the inspiration for Omega. We got him when he was a year old and I’ve always wondered what his life was like before we found him. He’s such a sweet dog. Just like the dog in the book, he’s a German Shepherd. Although my dog is black and tan, Omega is pure black. We also have another GSD named Caleb and a Siamese cat (also a rescue) named Hezekiah. I love all animals. If I could, I’d have about five dogs and five cats. And a housekeeper!

Thanks, Merrie! It’s a pleasure to have you at DivineDetour.

Thank you for inviting me! It was an honor to be here.

For more information about Merrie, visit her website at http://www.merriedestefano.com/ or her blog at http://merrie-destefano.blogspot.com/.

To purchase Afterlife, logon to: