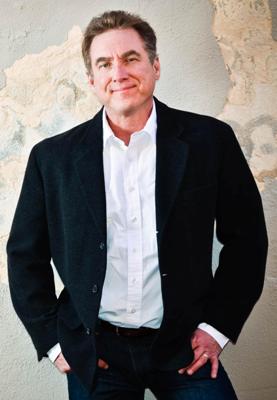 Michael J. Webb has always been fascinated with the supernatural, the historical, the scientific, and the Judeo-Christian worldviews—especially when they intersect. Since the age of twelve, when he took his first solo train ride, he has also loved travel. After high school, he and two buddies took off for Europe. A couple of years later he returned, as an exchange student in Holland. Many of the locations in Michael’s novels are places he has visited.

He and his wife make their home in North Carolina.

How do you make time to write? What’s your favorite writing routine?

I write at night, on weekends, and whenever I can find extra moments. I work full time in sales, so I have a flexible schedule, and I use free time to write. I keep a notepad with me in the car so that when ideas pop into my head, I can jot them down. However, I prefer to find blocks of time so I can lock myself away and write. That’s when I do my best work.

On more than one occasion and too many to count! Having said that, I suppose the most notable was keeping me from doing graduate work in Judaic Studies in Israel. Had I moved there it is highly unlikely I would have met my wife, who is truly a Proverbs 31 Woman. Among many other things, she kept the dream of my writing alive in her heart when it died in mine, and has faithfully prayed for years on my behalf.

Can’t separate the two. My Christian worldview and the many fascinating encounters I have experienced walking the “narrow path” are inextricably woven into the fabric of every story I write. My ideas come from the Lord, the words I write, the messages I endeavor to share, the passion for Him I want to communicate, and the desire to change hearts are all from the Ancient of Days. 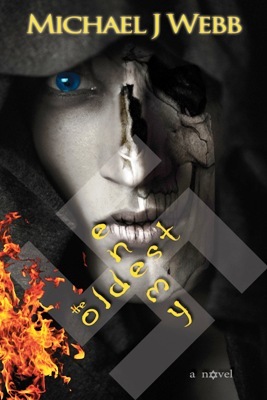 Let’s talk about your new book, The Oldest Enemy (Risen Books, November 2012). Please tell us about it.

I wrote this supernatural thriller in ’98-’99 and tried to get publishers and agents interested, to no avail. It sat, figuratively, in the drawer until last August. On a whim, I entered it into a contest sponsored by Risen Books. Much to my surprise, it won.

I got the idea while reading two different books, one on Exorcism and the other about art and gold stolen from Jews by the Nazi’s during WWII. The title is both about mankind’s oldest enemy, the devil, and anti-Semitism. I wanted to explore several topics simultaneously: the nature of true spiritual authority, deliverance, generational curses, and anti-Semitism. I also wanted to include a strong redemption message for both Jew and Gentile.

I don’t view myself as a Christian writer, but an author who writes from a Christian worldview. I don’t believe that’s simply a matter of parsing words. There is a significant difference. My goal is not only to reach Believers who love great stories, but also secular readers who might not normally have any interest in Christianity. If they like to read well-written supernatural thrillers, with lots of action, a great plot, and interesting characters, they will enjoy The Oldest Enemy.

Timing. Everything God does is about timing. Many of the things I portray in The Oldest Enemy are now literally unfolding on the world stage. Simply amazing. Not to mention that this novel sat in my computer for over twelve years and was finally published by Risen Books. Makes you wonder. Not to mention, God does, indeed, have a sense of humor!

What’s the next “adventure” you have planned?

My agent, Don Maass of the Donald Maass Literary Agency in NY, is shopping my fifth novel, The Gathering Darkness to publishers. I’m finishing up the sequel to that story, The Devil’s Cauldron, and outlining my seventh thriller, tentatively entitled Ghost Hunter. While I’m resting : )  I’m reissuing my first three thrillers, a trilogy entitled Giants in the Earth, as E-books later this fall. I hope to have the new covers posted on my website very soon. I’m also working on bringing out my non-fiction work, In the Cleft of the Rock: Insights into the Blood of Jesus, Resurrection Power, and Saving the Soul, as an E-book.

Tough question, because, other than Brussels sprouts, I never met any kind of  food I didn’t like. : )  I suppose my favorite comfort meal would be an authentic Mexican dinner, preferably cooked by my wife, who is an awesome cook, followed by a great dessert like bread pudding, coconut cream pie, or a heated chocolate brownie with Haagen Daas vanilla bean ice cream—or all three. Why? See first sentence.

My dad played Tenor Sax, had his own Jazz band in the ‘40’s, and played “pick up” sax for the Big Bands whenever they came to Miami, and my mother was a singer. I, on the other hand, love to sing and worship, but if there is anyone within thirty feet when I start singing they invariably turn up the music as loud as possible so I don’t ruin anything!

I am a worshipper at heart and would be anything written by Terry MacAlmon, Don Potter, Freddy Hayler, or JoAnn McFatter.

Hands down, the mythical warrior. Preferably Gandalf from Lord of the Rings.

I’m a fellow dog lover and have owned a Kerry Blue Terrier and German Shepherds. No dogs right now, but my wife has a Sun Conure parrot from the Amazon, and we have a salt water reef aquarium with seven fish. We stopped naming the fish because it was too traumatic when they died. Believe it or not, fish, at least in captivity, DO have individual personalities!

Thank you, Michael. It’s nice to have you as a guest at DivineDetour!

For more information about Michael, visit his website at http://www.michaeljwebbfiction.com or view the video trailer for the book at http://bit.ly/WkK5dL.

To purchase The Oldest Enemy logon to: