Multi-published author Miralee Ferrell has had thirteen books published or contracted in the past eight years. Her first novel, The Other Daughter, was released by Kregel Publications in 2007. David C. Cook just released the first book in her new Love Blossoms in Oregon Series.

She serves as president of the Portland, Oregon chapter of American Christian Fiction Writers and often speaks at women’s groups, libraries, and churches about her writing journey. Inspired by the work of Zane Grey, Miralee has a large first edition collection of his books.

She and her husband, Allen, live on eleven acres in the beautiful Columbia River Gorge in southern Washington State.

I know a lot of people talk about God nudging them to write, but that truly happened to me. I had no desire to write (other than personal memories/journals/letters). I was visiting a neighboring church to hear a special speaker. At the end of the service I responded to a call for prayer. The pastor/speaker prayed with me and stopped after a few moments. He shared that he felt God was saying that I should be writing . . . he didn’t know whether fiction or non-fiction, but that it was important it be published. I took that word home, prayed about it and counseled with my pastor, husband and mother, who all urged me to take it seriously. Two-and-a-half years later (after three magazine articles were published) my first book, The Other Daughter, released.

My books would be hollow without my faith. I weave my beliefs into each book . . . the first two (due to inexperience) a little more blatantly than the more recent ones, as I’ve learned to share my worldview and my faith in Jesus through my characters’ encounters and challenges. I’m a certified counselor with the American Association of Christian Counselors, so I also present issues women deal with, while trying to show the hope that God brings into our everyday struggles. 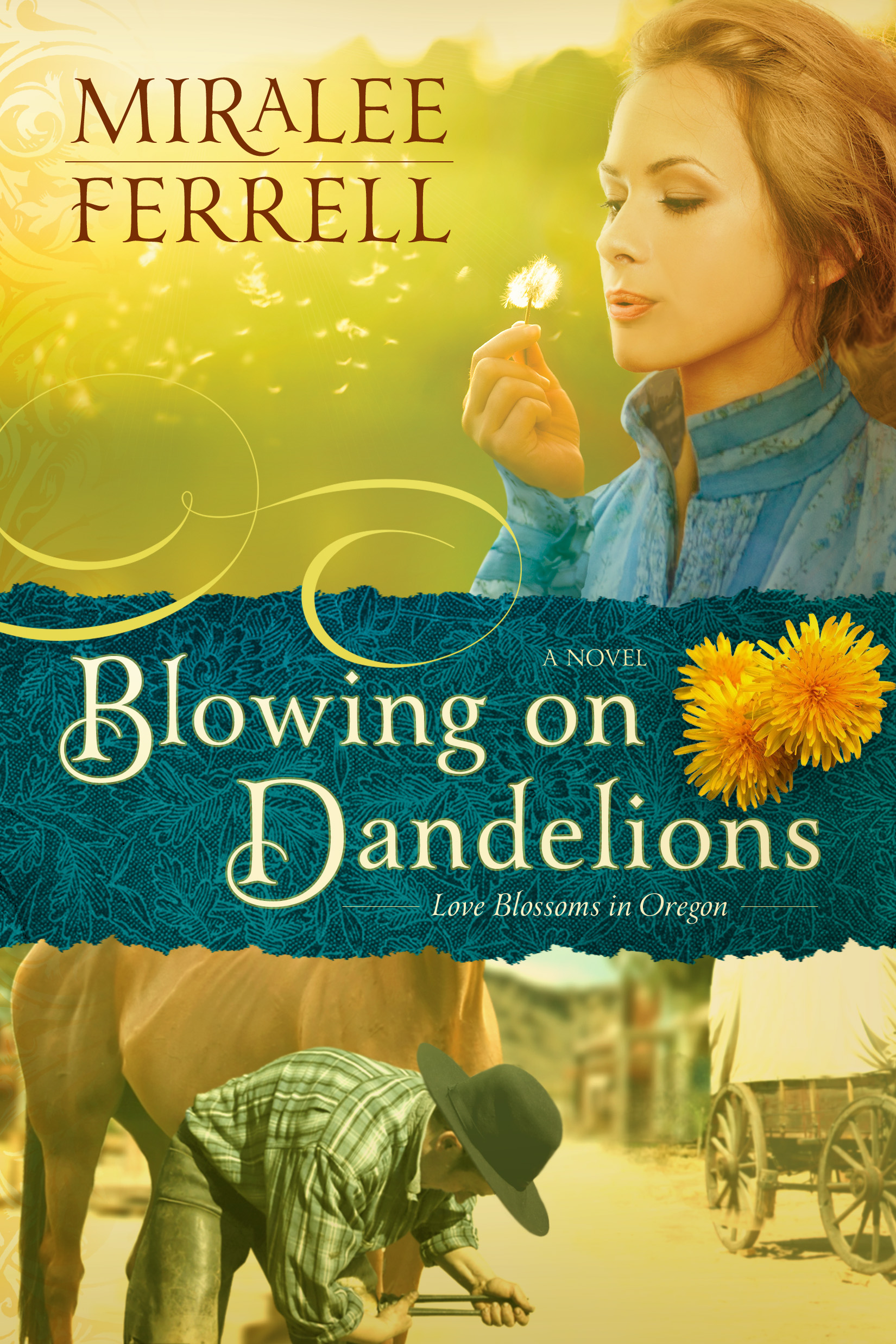 Let’s talk about Blowing on Dandelions (David C. Cook, June 2013). Please tell us about it.

Blowing on Dandelions is the first book in the three-book, Love Blossoms in Oregon series. It’s a historical romance set in Baker City, OR, 1880, but while it’s a romance it also has a strong women’s thread. I wrote the story after talking to a close friend and seeing the depth of pain she was dealing with in her relationship with her mother, a woman who showed nothing but disapproval and often times used manipulation to get her own way.

While my book has a definite romance thread and a variety of interesting characters that bring flavor and color to the story, it also deals with a difficult relationship between Katherine (my widowed heroine who is raising two daughters) and her mother, who decided to move in permanently with Katherine’s family at her boardinghouse. Readers will also meet Micah, a quiet but kind blacksmith who recently arrived in Baker City, along with his fifteen-year-old son, Zachary, and hopefully enjoy the budding friendship with Katherine’s daughter, Lucy, and the romance that develops between Katherine and Micah.

You’ve had eight books published or contracted since you began writing eight years ago. How do you meet deadlines? What’s your typical writing routine?

I break the book down into needed word count and calculate how many ‘writing days’ I have, not counting weekends, and allowing for a handful of days for vacation or sickness, and exempting the final month prior to deadline (used for revising/polishing), then divide the number of days into my word count so I know what I must average each day to make my deadline. I have a large, desktop calendar, and I write my month’s word count goal at the top, and each week’s goal at the start of the week, then note the amount I’ve written each day. I’m a visual person and this goes a long way toward keeping me on track.

I don’t really have a typical anything in my life. I write when I’m able to carve out time between family and church responsibilities, marketing/publicity, errands, and more, but I’d say I do the majority of my creative writing in the evenings when the house is quiet and there are less demands.

This particular detour happened almost two years ago and concerns my current contract for my new series. My agent had submitted the proposal for the Oregon romance series to Cook, while at the same time presenting a three-book series of Western (cowboy type) romances to another company. I really wanted to write that other series. I’d started it and was having so much fun with the characters that I longed to finish and not get detoured to another book/series. Both series passed editorial review and were slotted for committee . . . but the Western series kept getting stalled and pushed to the following week, then to the following month. In the meantime, Cook had made a very attractive offer, and I needed to make a decision. I prayed, but kept asking the Lord to please let the other company hurry up, so I could write the other series.

God had other plans. Deep in my spirit I knew I was supposed to write Blowing on Dandelions first. God had given me the story idea and title over a year earlier, but I’d gotten off the path and lost that sense of calling . . . I’d taken a detour after my own flesh. The other company delayed yet again, and my agent and I decided that clinched it. I would take Cook’s offer and let the other one go. I can’t tell you how grateful I am now that time has passed and I have some perspective. I’m sure the other company would have been great to work for, but this is the book I was meant to write first, and this is the company God wanted me with, at least for now. Cook has been such a joy and a blessing to work for, and I’m praying I’ll be able to find a writing home with them for a long time to come. God took my own selfish desire that could have taken me on a round-about detour, and brought me exactly where He wanted me to be, and I have to say, I’m more than thankful!

Oh, that’s hard, as I have several. But I think the top two are Rocky Road ice cream and Dove dark chocolate. Yum!

I wish I did, but unfortunately, no. I love listening to Christian worship and praise music, but I have no musical talent at all. My only other ‘artistic’ type talent is oil painting. I used to paint scenery, but once I started writing I no longer had enough time for painting.

Definitely upbeat, joyful, praise and worship. I’m a glass half-full kind of gal, and tend to see the good in life and expect God to move on my, or other’s behalf, because I know how much He loves us and cares about His children.

I’d have to say that most of the time I’m the strong female lead, but with a little bit of the girl next door thrown in to soften the edges.  : )

Oh yes, I LOVE animals, too. In fact, as I’m writing this, Lacey, my little six lb, long-haired Chihuahua is curled up on my lap trying to sleep through my typing. Often she’ll perch her chin on the edge of my keyboard and softly growls at me if I shift her in another direction, LOL! She knows exactly what she wants and does not care to be corrected. An hour ago I finished giving Sophie a bath, our Australian Shepherd/Blue Heeler cross, and she’s snoozing on her bed not far from my desk. Our two cats, Tom and Smoke, are curled up somewhere enjoying the warm house, as it’s raining outside. Oh . . . and I have an Arabian mare as well . . . Khaila, who just this year is enjoying retirement, so I ride my son-in-law’s horse when my daughter and I go trail riding together.

Thanks, Miralee! It’s great to have you as a guest at DivineDetour.

I’ve loved being here. You had some excellent questions, and I do hope your readers will consider picking up a copy of Blowing on Dandelions and consider posting a review if they enjoy it!

To purchase Blowing on Dandelions, logon to: