Murray Pura has traveled the world as far as China, mostly by thumb, and lived in the Middle East. He earned his Master of Divinity degree from Acadia University in Wolfville, Nova Scotia, and his ThM degree in theology and interdisciplinary studies from Regent College in Vancouver, British Columbia.

For more than twenty-five years, he has pastored churches in Nova Scotia, British Columbia, and Alberta. His writings have been shortlisted for the Dartmouth Book Award, the John Spencer Hill Literary Award, the Paraclete Fiction Award, and Toronto’s Kobzar Literary Award.

Murray lives in southern Alberta near the Rocky Mountains. He and his wife, Linda, have a son and a daughter.

Your writing journey began at an early age and your itinerant spirit has taken you, literally, across several continents. I’m willing to guess that you have a long list of book ideas from which to draw. How do you decide which story to write next?

Sometimes it’s simply decided by a contract. A publisher asks you for some story ideas and they accept one or two of them and that’s where you start. So you throw out several ideas and you don’t know which one they will take an interest in.

Well, I started writing before I became a Christian and then when I did start following Christ it affected everything I wrote. My heroes and heroines deal with life by means of prayer, Scripture, and their faith in God. It’s real to them, not just a habit or something they grew up with. They expect God to be intimately involved with their struggles and difficulties and help them work everything out.

We were supposed to live several years in Scotland but unexpectedly had to return to Canada. It was upsetting and disappointing. However my writing began to take off months after our return because I received several publishing offers after meeting people in Canada and the USA. What a surprise that was! 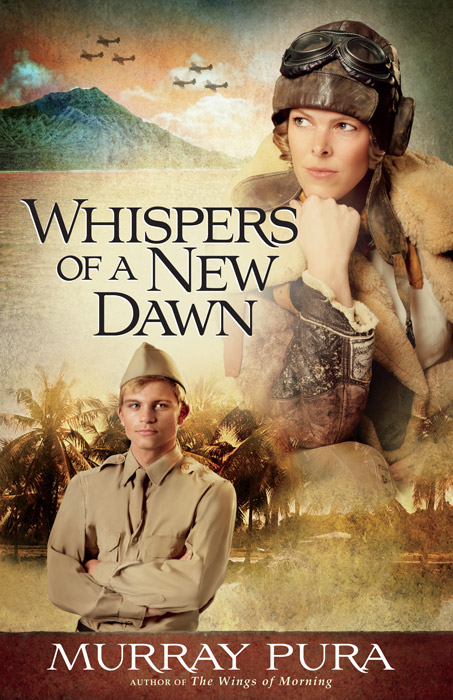 Let’s talk about Whispers of a New Dawn (Harvest House, April 2013), Book 3 in your Snapshots of History Series. Please tell us about it.

It’s the sequel to The Wings of Morning and takes place twenty years after the events in that novel. So Wings occurs from 1917-1919 and Whispers occurs in 1941. It’s the same characters, an Amish man and wife who love to fly and now their daughter, who is also a flier. They return to the Amish colony in Pennsylvania and try to start a new life with their families and the Amish church and give up their airplanes. But through various twists and turns they wind up leaving the colony and traveling to Hawaii to help friends who desperately need their flying skills to train Army pilots. Of course this creates a crisis in their relationship with the anti-military Amish. But Hawaii opens doors of romance for their daughter and the painful decision to leave the colony in Pennsylvania is eased by her love for a young Army pilot. Everything seems to be going along beautifully—until Sunday morning, December 7, 1941.

God often uses our work to teach us something. What has writing taught you (about life, faith, and/or even yourself)?

In my stories I can control the plot to a great extent. I’m the creator. But in real life I can’t do that. Many times I’ve said, “If I was writing my life as a book I wouldn’t have let that happen!” All I can do is kneel before God and seek his peace and strength and guidance—I can’t run things in the real world like I can in my novels and stories.

Salt and vinegar potato chips and Coke Zero. I love the flavor and it reminds of sitting down to watch a good movie in the comfort of my own home.

I like all kinds of music. But we especially love acoustic guitar. In our house we have lots of guitars—Martins, Larrivees, and Taylors and they see a lot of use. It is a great way of relaxing after writing intensely and meeting deadlines.

I’m definitely the mythical warrior. That’s me, with my horse and sword and courage!

I’m a dog lover, and I know you are too. You recently lost a canine companion (something my husband and I also experienced in April), and you wrote a beautiful blog post about your loss. Have you and your wife added another canine to your family yet?

Well, my wife doesn’t want to because each time we’ve lost a dog it’s hurt so much (we’ve had dogs since 1986 without a break). I still want to have another pair (we’ve always had brothers and sisters). I guess we’ll have to see.

Thank you, Murray! It’s a great pleasure to have you as a guest at DivineDetour.

My pleasure, thanks for the fun questions.

To purchase Whispers of a New Dawn and/or other books by Murray, logon to: