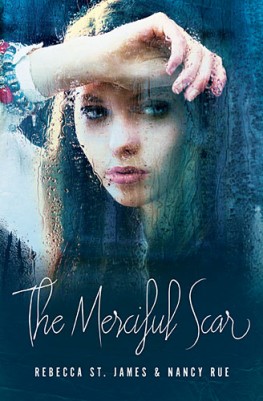 Christy Award winning author Nancy Rue earned a master’s degree in education at the College of William and Mary, and then a degree in theater at the University of Nevada, Reno. While in the midst of her teaching career, she and her husband founded Nevada Children’s Theater.

Nancy has authored more than 100 books for ‘tweens, teens—and their moms. Her most recent novel, The Merciful Scar, is the first in a three book series she co-authored with Christian singer-songwriter-actress Rebecca St. James.

Nancy and her husband, Jim, share their Tennessee home with two yellow labs and a tabby cat.

Let’s talk about your new novel, The Merciful Scar (Thomas Nelson, September 2013), co-written with Rebecca St. James. Please tell us about the story.

When I asked Rebecca what issues the New Adult Women (17-30) she ministers to are struggling with, the first thing out of her mouth was “cutting.” So we decided that the first of our three co-written novels would be based on a young woman who self-injures, with an emphasis on her healing. It promised to be a somewhat dark tale, so we incorporated a love story and set it on a sheep ranch in Montana and gave our protagonist, Kirsten, an inner voice that constantly nags her in a snarky voice. So it’s a story full of healing and humor and humanness.

What sparked the idea of the two of you writing together? How did you manage the logistics?

Rebecca starred in a PureFlix film entitled “Sarah’s Choice,” and she wanted to have a novelization of the movie done. Through a conversation between Rebecca’s agent and mine, we were able to connect and discovered that we are kindred spirits. So we put together a proposal for Sarah’s Choice, and when it was presented to Thomas Nelson Publishers, they asked if we would like to do three novels together, with Sarah’s Choice being the middle one.

Once we decided on the basic story line for the first one (Merciful Scar) I ran with it. Rebecca approved the “skinny draft,” making some suggestions, and as I wrote the novel I sent her chunks of it and she, again, made suggestions and gave her approval. The bulk of Rebecca’s work is taking place now; she is the voice of the novel and is doing the promotions.

You tackle a tough issue with this story. What was the most difficult part about writing it?

Again, the impetus for writing about self-injury came from Rebecca’s experience with the young women she ministers to. Once I got into the research, I was astounded at how common this troubling problem is, and I wanted to “get it right” in the story. The most difficult part for me was discovering that so many young women are suffering in this way. I have about thirty regulars on my teen blog, and when I asked if anyone had experience with self-injury and would be willing to talk with me, I immediately had six responses. They opened themselves up to me, and my heart broke. 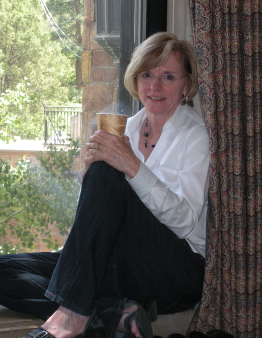 God often uses our stories to teach us something. Did you learn anything (about life, faith, and/or even yourself) in the process of working on this project?

That has always been my experience, and it was definitely true in this case. I spent about a week on a sheep ranch in Montana researching, and I learned not only that I am capable of more physically than I give myself credit for, but that “getting some of it on you” is a great spiritual teacher.

I learned to stop looking so hard for answers and letting them come through the still small voice of God. You can’t hurry sheep, not if you want them to co-operate with you. And you can’t hurry people either. I slowed down and discovered that when you stop worrying about how well you’re doing and become completely absorbed in the work at hand—caring for beings who have no hope of surviving without you—you can hear God, just as Kirsten does in the story. Basically, I heard the bat kol.

The second book, Sarah’s Choice, is off to the printer and will be released sometime in the spring. Right now I’m doing the background work and basic story line for our third novel, currently titled Tara’s Vision (though don’t count on that being the title that appears on the final book . . . publishers seldom like what I come up with!) This one is about a twenty-five year old woman who discovers three weeks before her planned fairy tale wedding that her fiancé is addicted to pornography. No, Rebecca and I don’t shrink from those tough issues!

And a few fun questions in celebration of the holiday season…

It has to be O Come O Come Emmanuel because it captures the mystery of this whole Christmas thing. Although, if I want to rock out, I listen to Mannheim Steamroller’s version of The Hallelujah Chorus over and over. And did I mention over?

“Surprise Bars”—you know, those brownie-like things you make with chocolate chips, condensed milk, coconut, crushed graham crackers, and nuts. I sprinkle them with red and green sparkles before I bake them (and according to my two-year-old granddaughter you can never have too many sprinkles) and eat them with hot chocolate. They go straight to the thighs . . . .

How much time ya got? There are so many. I love Christmas and so does my family. I think one of my faves is this: Marijean (my thirty-four year old daughter) and I have, for about ten years now, provided everyone who spends the night Christmas Eve (that group varies from year to year) with pajamas. Sometimes they’re all the same. Sometimes each person gets a different t-shirt to go with the pants. In recent years we’ve just done the t-shirts and let everyone provide their own bottoms.

One year we redid the poem “The Night Before Christmas” to fit our group. Another year it was “The Twelve Days of Christmas” and each person got a line on their shirt to match them (Kay, who is a hair dresser, got “Seven Kay’s a Stylin’). One year we gave each person a white t-shirt for someone else in the group and we each had to design the t-shirt for that person; we provided the fabric markers, etc.

For the last two years, we’ve given each person a sweatshirt with a design on the back that my little granddaughter helped us make—with her tiny hand prints forming reindeer antlers, her footprints shaping a Christmas tree. This year we’re going to let her decorate the wreaths we’re painting on the back of each one. It’s a tradition Marijean and I love preparing, and everyone waits for it after Christmas Eve supper. We all wear them Christmas Day and do a group photo. Can you stand how fun that is?

Oh, definitely the shaggy cedar covered in homemade ornaments and strung with popcorn. Only, our tree is usually a Douglas fir we cut down at the tree farm and a lot of the ornaments are ones we’ve collected through our forty years together. The homemade ones get the highest billing, though. We still use the angel for the top that Marijean made years ago out of starched lace and gold lame. That angel rocks.

Thank you, Nancy! It’s nice to have you back at DivineDetour.

I LOVE these interviews!!!! You ask the best questions.

To purchase The Merciful Scar and other books by Nancy, logon to: