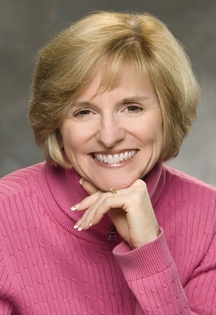 Nancy Rue is the award-winning author of more than 100 books for adults, teens, and ‘tweens, including Healing Waters (written with Steve Arterburn), which was the 2009 Women of Faith Novel of the Year.

She is the recent winner of two Christy Awards and nominee for the 2011 Inspy Award for General Fiction. When not writing, Nancy enjoys traveling (sometimes on a Harley), speaking to women’s gatherings, teaching groups of ‘tween girls and their moms, and mentoring other Christian writers. The second book in her The Reluctant Prophet Series, Unexpected Dismounts, was released last week.

A former high school English and theater teacher, Nancy now lives on a lake in Tennessee along with her husband Jim and their two yellow Labs.

For fifteen years, you worked a day job and wrote in your “spare” time. What kept you going when sleep and patience were lacking?

I have to say it was God, really. I couldn’t NOT do it, if that makes any sense. It certainly helped that I loved the writing more than the day job! I also knew that I wasn’t going to be able to write full time until I was well-published. Now that I think about it, there was all kinds of motivation, with God providing the energy.

I’d have to say my faith IS my work, and my work is an expression of my faith. The longer I live, the more I realize that God has to be inherent in every area of my life—that everything I do needs to be the fruit of my relationship with God. I know I would have a hard time writing a story that wasn’t based in faith, even if the message wasn’t stated overtly. My litmus test for a piece of my work is that if I were to pull out the message, the whole thing would come unraveled. 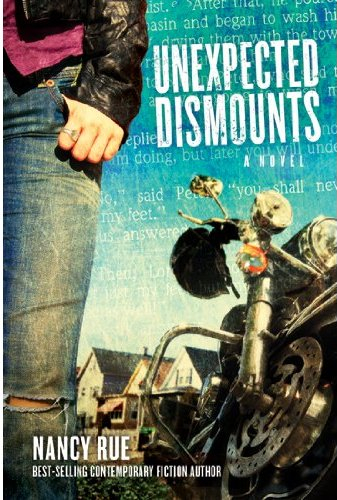 Unexpected Dismounts is the second book in The Reluctant Prophet trilogy, so you’ll see Allison moving further along in her journey as, well, a reluctant prophet. She continues to follow the Nudge of God, even when it takes her into deeper, darker territory. She still rides her Harley, still works with the prostitutes who have come off of West King Street to Sacrament House, still struggles with her attraction to Chief, and continues to try to get full legal custody of Desmond, the mulatto orphan. There’s romance, mystery, action, relationship, and faith questions—all the things I like to read in a book myself. The middle book in a trilogy is always the hardest to write, because there’s a lot of bridging that has to happen and as an author I’m not always sure it’s as dramatic as the first one. My editor assures me there is plenty of drama!

What a great question. I’ve had a very recent detour, actually. The market for children’s books (tween and teen) which is where I do most of my writing, has been in a drying-up state for several years. This is the first time in sixteen years that I don’t have at least two or three contracts waiting to be fulfilled. Publishers are more conservative, less willing to take financial risks, and many of us established writers are having to make decisions about where to go from here. God and I have been in some deep discussion about that! I’ve had to rethink my plan and have discovered my love for mentoring, which has led me to some new ventures that may unfold in the next few years. I’m still writing, of course, but I’m also focusing on my internet ministry and on holding conferences for kids’ writers to see if we can’t turn this ship around.

You write a compelling adult blog entitled The Nudge. How, in your opinion, do we best recognize “nudges” from God? How do we best respond to them?

The “nudge” seems to be different for everyone. I personally will get an idea “out of the blue” that is clearly not my own voice speaking to me, and then as I focus on it, I receive confirmation from my daily Scripture reading, from “random” things people say to me, even sometimes from a line in a song or a commercial! When something just won’t leave me alone, and it doesn’t involve chocolate, I at least entertain the notion that it’s coming from God. The mistake a lot of people make with a nudge—and I certainly have in the past—is to run with the thing before really talking to God about how it’s to be played out. I see it a lot at writers’ conferences—students who have heard from God that they’re to write and so they’ve plunged right in to creating a novel. That’s sort of like getting the nudge to be a doctor and heading straight for the nearest emergency room to start stitching people up. God may give us the goal, but we still have to work, usually pretty hard, to get there. So my response is usually to look for confirmation (and when I don’t find it, it’s clearly not a God-thing), and then explore the territory I’m being shoved into. That means prayer, reading, research, lots of listening and dreaming. Most of the time I welcome the nudges—although the latest one, to get more exercise, I’ve tried every way I can think of to invalidate that and it won’t go away. Rats.

As a speaker, workshop leader, and mentor to other writers, what is the most important piece of advice you share with those just starting out as writers?

Take the time to learn your craft before you try to get published. Take classes. Read voraciously in the genre you’re compelled to write in. Then write, write, write—and did I mention write? When I visited the home of Rembrandt in Amsterdam, I was struck by the displays of sketches he did before ever starting each of his famous paintings. There were literally hundreds of them. That’s what every writer needs to do, no matter where he or she is in the writing life. It simply takes time, as all things of divine importance do. 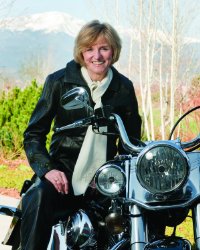 Definitely chocolate. Organic, dark at least 70% percent cocoa. I like the little individually wrapped squares. I also love me some hot chocolate, made with goat milk, dark unsweetened cocoa powder, some Stevia, and a dash of  Chinese five-spice. I don’t actually need to be stuck or celebrating to indulge in those!

I love music, but as for talent—I might have an ounce or two. I actually wanted to be a choral director when I was in high school, until I realized I had more drive than gift going for me! So I’ve been a church choir director (a very amateur position in a very small church!) and done some solo work. Mostly, I just love to belt it out with Fleetwood Mac when I’m driving my car. My fave Christian artist is Margaret Becker. (In the interest of dull disclosure, I have a secret dream of being a back-up singer in a rock band . . .)

Something with a strong, driving beat that moves and excites. Something along the lines of Randy Stonehill’s The Wild Frontier.

That depends on the day! Some days I am the strong female lead, which others might define as “Bossy.” Other days, I’m still the little girl trying to walk in high heels. (These are great images, by the way.) I am seldom mysterious—we’re talking wide open book here; I will always tell you more than you really want to know. Can’t see myself as the super heroine—I’m just way too klutzy, and that would require far too much exercise. Yeah, I like the “lead” idea, because that really is what I try to do—lead young girls and young women closer to their true selves, the people God made them to be. And sometimes, I’m walking right there with them, tottering in my pumps.

I’m a dog lover. Please tell us about your two dogs.

There isn’t nearly enough space here for that! Guinness and Geneveve are my constant companions. They are twenty-month old sturdy yellow labs, brother and sister. Jim and I have had a series of labs in our thirty-eight years of marriage, but these two are definitely the craziest. For Guinness, there isn’t a trash can on earth that doesn’t need to be gone through. With Geneveve, it’s dirty socks; she can steal them while you’re sorting the laundry and you never even notice until you come up three short in the folding. They seldom leave my side unless they’re swimming in our lake—well, Guinness that is. Geneveve doesn’t like to get her hair wet; we call her the baroness. Writing is a very isolated profession, especially for an extrovert living out in the country. The two pups ward off the loneliness and keep me sane and safe. They are some of God’s finest creatures.

Thank you, Nancy! It’s so nice to have you at DivineDetour!

This has been a total pleasure—thank YOU.