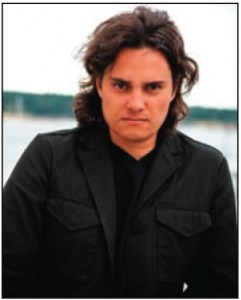 Nick Daniels was born in the late 1970s in a bustling city in South America. He wrote his first short story in third grade and spent the next few years reading literature classics (mostly Dostoievsky) and contemporary Latin American writers.

After graduating from journalism school, Nick moved to the United States to continue his education and write about science and faith issues. He worked as a science writer for several years until he gradually found his way back into fiction. He also co-hosts an apologetics podcast entitled Breaking Unbelief.

Nick now lives on an island in the Pacific, in what he describes as a writer’s paradise.

Your interest in writing goes back to childhood. Did you ever consider another career?

Following my family’s advice I enrolled in business school after graduating from high school, but I spent more time volunteering at the campus’ newspaper than studying accounting and economics. So in the middle of the second semester I quit and went to journalism school instead. That was my only serious attempt to do anything different than writing.

My faith in Jesus is like a magnifying glass that allows me to see the details in the characters and situations that I write about, and it’s also a lamp that reveals the plot ahead. I pray for creativity and thank God for every word.

Let’s talk about your new book, The Jihad’s Messiah (Risen Books, September 15, 2010). Please tell us about it.

The story takes place in the year 2024. America is no longer a world superpower. Iran, Lebanon, and Syria lie in ruins after Israeli defensive nuclear strikes. Fear drives the Arab world to sign a seven-year peace treaty with Israel. And a radical Iraqi leader rises to power promising to convert the world to Islam.

Besides entertainment what do you hope readers will take away from it?

Perhaps a new take on the current events in the Middle East. For many readers, the themes explored in the novel will challenge some preconceived notions about Biblical prophecy and the true nature of Islam. I’m not out to convince anybody or change their beliefs (I’m simply telling a story), but at least I want to generate some discussion around these issues.

The Jihad’s Messiah examines Islamic terrorism in the light of Biblical prophecy, while giving a human face to the so-called “enemy of America”—the Muslim world. Unlike other novels in the market dealing with terrorism, The Jihad’s Messiah tells the story from the point of view of a Muslim militant, not an American with a Christian background. The character’s spiritual and physical struggle plays against the end-time events described in the Bible.

My life is an adventure of sorts—just ask my wife—because of all the countries and cities we have lived in. What I’ve learned is that God is good and that favor does not come from location, but from Him. Wherever we’ve gone, we have been blessed.

Ice cream. Especially chocolate ice cream with some blueberries. I don’t know why, but I just love it.

I’ve played the guitar since I was thirteen. My mom insisted that I learned to play the guitar so I could entertain party guests, but what really got me interested was worshipping God with an instrument.

None other than Abraham’s story. God called me out of my country many years ago and has led me through “Egypt” up to the promised land.

I’m allergic to all furry animals. Seriously. My eyes start to itch and my chest feels tight around dogs.

Thanks, Nick. It’s nice to have you as a guest at DivineDetour.

For more information about Nick, visit his website at www.nickdanielsbooks.com.

For more information about The Jihad Series, logon to www.jihadseries.com.

To purchase The Jihad’s Messiah logon to: