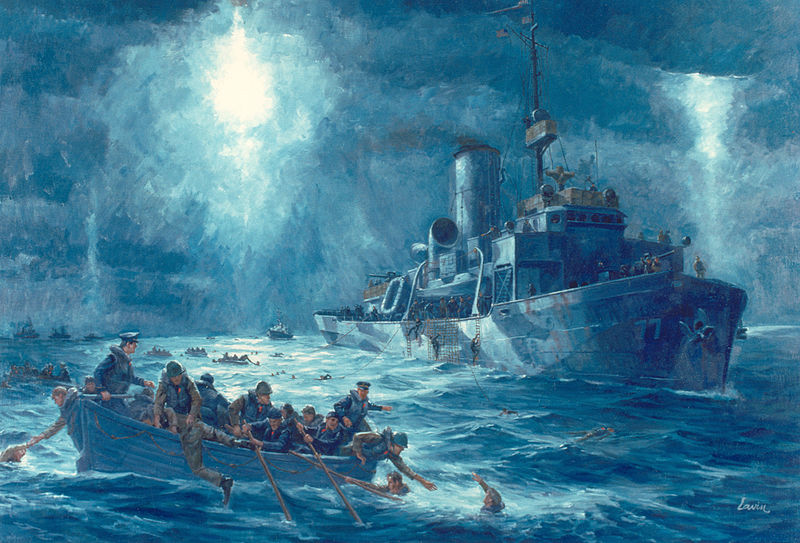 The Coast Guard’s “Battle of the Atlantic” lasted six years—September 9, 1939 to May 7, 1945. While not as well known as many WWII battles, the toll in the Atlantic was staggering.

Bloodstained Sea by Mike Walling gave the heart-wrenching statistics:  “approximately 3,000 merchant ships, 200 warships, 2,000 aircraft, and more than 700 U-boats lost, with more than 60,000 men, women, and children killed.” Included in that number was the U.S.A.T Dorchester.

According to the FourChaplains.org website, The Dorchester, with 902 servicemen, merchant seamen, and civilian workers on board, was part of a convoy moving across the icy North Atlantic from Newfoundland to Greenland. Just before 1 a.m. on February 3, 1943, a German U-boat fired three torpedoes at it, with one inflicting deadly damage. Within twenty minutes the Dorchester sank, with a loss of 672 men.

Among those killed were four Army Chaplains:  Lt. George L. Fox (Methodist), Lt. Alexander D. Goode (Jewish), Lt. John P. Washington (Roman Catholic), and Lt. Clark V. Poling (Dutch Reformed). They spent the final minutes of their lives calming the frightened, guiding the disoriented toward safety, and tending the wounded. And when the life jackets ran out, these four chaplains gave up their own.

As the Dorchester went down, the chaplains reportedly stayed on deck with arms linked, praying and offering encouragement until the very end. Their sacrifice showed extraordinary faith, courage, and selflessness. Survivors called it “one of the finest things they had seen or hoped to see this side of heaven.” Jesus’ words describe it well:

Greater love hath no man than this, that a man lay down

Chaplains continue to be an important part of our military, providing pastoral care to individuals and their families; offering advice to senior officers on religion, ethics, troop morale, and morals; and serving as liaisons with religious leaders in the community. In many instances they are working with men and women of all faiths. And just as pastors who preach the truth of God’s Word today are under spiritual attack from the devil, so are the military chaplains.

As we remember Veterans Day this year and all who have served, may we also remember the chaplains who share the love of Christ and the truth of God’s Word with our armed forces. May they continue to show the “extraordinary faith, courage, and selflessness” of the Four Chaplains from WWII.

In Sea of Glory, a novel based on the story of the Four Chaplains and written by Ken Wales and David Poling (first cousin to Chaplain Poling), the chaplains are portrayed not only as praying but also singing Eternal Father, Strong to Save as the Dorchester goes down. May the words of this beautiful hymn guide our prayers this Veterans Day for all who serve on land, air, and sea.

Eternal Father, strong to save,

Who biddest the mighty ocean deep

Its own appointed limits keep;

Oh, hear us when we cry to Thee,

For those in peril on the sea!