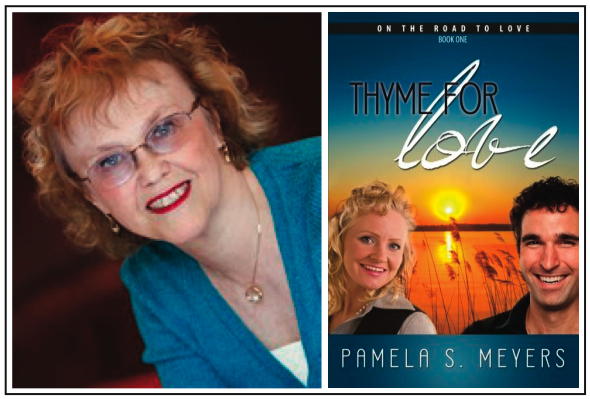 Pamela S. Meyers earned a college degree at Trinity International University, where she studied writing. She joined American Christian Fiction Writers in 2002 to pursue the craft of fiction, and served on the ACFW Board of Directors from 2005-2009.

After living in a variety of places—from Lake Geneva, Wisconsin to New York City to Los Angeles—Pamela returned to her Midwestern roots and now resides in Illinois. She is active in her church and has served as a sign language interpreter, is currently involved in outreach to the Japanese community, and leads a women’s Bible study group.

Please tell us about your new book, Thyme for Love (OakTara Publishing, November 14, 2011).

The best way to tell about the story is to share the back cover copy:

April Love has always dreamed of being a chef. But she didn’t expect a former fiancé or murder to be part of the recipe for her new job.

When April Love signs on to be an in-house chef at an old lakeshore mansion in Canoga Lake, Wisconsin, she comes face to face with her long-lost love, the drop-dead gorgeous Marc Thorne. It doesn’t take long for their old magnetism to recharge, but how can she trust the guy who left her nearly at the altar eight years earlier? Her gut tells her something happened to Marc in between—something he’s reluctant to reveal.

When April’s boss is murdered, Marc is accused of the crime. Unless April can find out who really killed Ramón Galvez, her chances for love will end up at the county jail. But someone else is just as determined she not solve the mystery . . . and will go to any length to stop her.

I’ve always loved mysteries and romances. I grew up in Lake Geneva, Wisconsin where our beautiful lake has been the site of 19th century mansions built by wealthy magnates of Chicago for escapes from the city heat during summer. A few years ago the HGTV cable channel had a show called If These Walls Could Talk and that got me to what kind of secrets might lie behind the walls of those mansions. When I began plotting Thyme for Love, I realized that if I set the story in a fictional setting, I would have more leeway with the plot. So I developed Canoga Lake just east of Lake Geneva—a smaller lake and community that also had similar mansions along its shoreline. Add my interest in cooking and the story just took off from there.

Until about five years ago I worked as an administrative assistant in an elementary school district. I loved working for the director of student services, which encompassed special education, gifted, and ESL. I thought I would stay until retirement age. But, changes came, as they have in so many peoples’ lives and I was asked to take early retirement.

I’d worked there enough years that I had a pension, but even so, my income was cut dramatically. At first I saw the situation as bleak, but I soon learned I could live on the money coming in, and it gave me necessary time to serve on the board of the American Christian Fiction Writers, which I never would have had working full time. And, of course, it gave me writing time, which led to publication of my first book, Thyme for Love.

Having worked all my adult life, I never expected to be able to retire when I did, but God showed me that He was in this detour, and He had other plans for how He wanted me to spend this season in my life. It goes back to the verse from Isaiah 55:8 that says: For my thoughts are not your thoughts, neither are your ways my ways, declares the LORD.

Taking early retirement was certainly not in my thoughts at that time, but it was in His thoughts toward me. How can I not trust Him more fully after that?

Thank you, Pam! It’s nice to have you at DivineDetour this week!

To view the video trailer for Thyme for Love, logon to http://www.youtube.com/embed/UN8qm0P3xi8.

To purchase Thyme for Love, logon to: