God has written a number of detours into Tamara Leigh’s life.

When the blessing of children proved elusive, she turned to her writing. Soon afterward, her agent called with news of Bantam Books’ offer for a four-book contract. That same day, Tamara’s pregnancy was confirmed. Within the next year, she committed her life to Christ, her first child was born, and her first historical romance novel was released.

She published three more secular novels with HarperCollins and Dorchester, infusing her growing Christian beliefs into her writing. Then she made a conscious effort to change her path—to writing inspirational fiction for the CBA market. 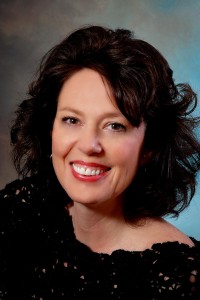 Creativity is often innate. Did you begin writing as a child?

I certainly did begin my writing journey as a child. By my teenage years, I was composing short stories and attempting full-length novels.

Was there an a-ha moment when you decided to turn writing into a career, or did your interest in it develop slowly?

Since my self confidence was such that I considered publication an unattainable dream, it wasn’t until I was twenty eight and working as a speech pathologist that I returned to my love of writing in hopes of a career that would allow me to stay home with the children my husband and I hoped to have. Writing during after school hours, it took about six months to write my first medieval romance. Six months later, I had a contract for what would be titled Warrior Bride and three other books.

Do you (or did you) have other career aspirations? What would you want to do if you didn’t write books?

Though I dreamed of becoming a writer when I was a teenager, I took the safe and sure route and pursued a master’s degree in Speech and Language Pathology. So, if I hadn’t taken a chance on publication, I would still be a speech pathologist, I imagine. I very much enjoyed working with children.

You write women’s fiction with a touch of humor. What genre do you prefer to read when kicking back with a good book?

I read a variety of genres. What I choose when I kick back all depends on my mood. Sometimes I want something light and humorous that I don’t have to think too much about. Other times, I want my heart strings pulled hard. Yet other times, I want to learn something or be inspired by a true story.

It’s difficult to break into book publishing. What was your big break? How did it come about?

I was very blessed. In late 1992, when my Warrior Bride manuscript was complete, I went the agent route, though it wasn’t necessary since most publishers were still accepting unsolicited manuscripts. My agent told me that if I made a few changes to the manuscript, she believed she could find a publisher. It took about a month to tackle the changes (I was a little stubborn), but a week after sending the revised manuscript to my agent, she had multiple offers on the book. I signed a four-book contract with Bantam.

What advice would you give young writers who are looking for their first break?

Be realistic (you may be published, but that doesn’t mean you’ll be able to quit your day job—ever), be in tune (read plenty of books in the genre in which you aspire to be published), be informed (study writing craft books and take online writing courses), be connected (join writer groups and attend writing conferences).

Faith has played into all my published books to one degree or another. When I began writing secular medieval romance in the 1990’s, I was seeking my faith, and I believe my characters from that time period reflect my own struggles. By the time I transitioned from the secular market to the inspirational market, I had found my faith. That’s not to say I’m not still piecing it together. I certainly am. There’s always something to learn and to grow through. Wonderfully, by superimposing my faith struggles on my characters and helping them work through them, I often find my own way out of those struggles.

In 1994, my first medieval romance, Warrior Bride, was published in the secular market—yes, there were requisite love scenes. Six more books followed, during which my faith grew and wove its way into the stories. That was a problem for my editors who wanted more love scenes, not “religion.”

Feeling “caught between a rock and a hard place,” I went back and forth over whether or not to cross to the “other side”.  The “rock” represented the secular romances with which I’d had success, while the “hard place” represented the possibly failure-riddled world of Christian romance.

While I clung to what I believed was safe, God kept “calling” me—when I spent time in his Word, when my sister lovingly questioned the content of my books, when my editors slashed scenes that had too much “religion,” and when my oldest son reached the age where he had the ability to read a book written by his mother. Yes, I snatched it out of his innocent little hand.

Finally, I did “cross to the other side”—only to question God when I learned medieval romance doesn’t do particularly well in the inspirational market. I groaned when my agent asked for something different, but eventually pulled out a story I’d written years earlier to relieve my pen and paper craving following a boycott of the publishing world. Thus, Stealing Adda, a humorous take on the life of a romance writer, was my entry into the Christian market, and five more books have followed. Talk about a positive change!

Where do you get your ideas for books? Do your characters or your plots usually come first?

I believe my books are driven by a mix of character and plot, though if I had to put one in front of the other, I’d say character comes first. As for my ideas for books, they come from various places—current world issues, hurdles I face myself, situations I observe from near or far, and sometimes straight out of the blue.

Writing is hard work. How do you discipline yourself to write every day? Do you have a writing routine? Where do you write?

Writing is definitely hard work, which is the reason discipline and routine are necessary. Typically, I write Monday through Friday while our boys are in school. Sometimes I write at home, and other times I write at coffee shops or bookstores (both of which provide delicious Caramel Macchiatos).

Let’s talk about your new book! Nowhere Carolina is the second in your Southern Discomfort series for Multnomah Books. Tell us a little about it. 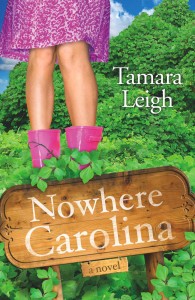 Just a little? How about this, the back cover copy:

Maggie Pickwick is a lifetime away from her days as head cheerleader and the mistakes she made in high school. Twelve years later, this single mom has traded pompoms for an auctioneer’s gavel, popularity for peace and quiet, and strives to be a good example for her daughter, Devyn. She’s keeping it together just fine—until an old flame moves back to her little North Carolina town. Renowned artist, Reece Thorpe, wants nothing to do with Maggie—not after what she did in high school—but he might also be Devyn’s father. Fed by her own pride and fear for her daughter’s happiness, Maggie finds herself on a slippery slope of white lies as she attempts to convince Reece that she’s changed. But the truth has a way of making itself known, and now Maggie’s past and present mistakes could ruin her chance at love.

Where did you get the idea for this book and the series?

Growing up out west, my mother would sometimes talk about her small hometown of Marion, North Carolina. I was intrigued with the differences in Southern culture and values and they simmered in the back of my mind for years and years. My husband and I moved to Tennessee fifteen years ago and, as I continued to write, the South with all its beauty, charm, and quirks began to flow into my writing. So when it came time to submit a new proposal, I decided to give it full license, drawing on my mother’s experiences from 50 years ago and my own current experiences. And so the Southern Discomfort series was born.

When a reader closes Nowhere Carolina, I hope she does so with a greater desire to draw near God—to listen to Him no matter how soft or loud He may speak, to believe Him no matter how unbelievable His love may seem, and to trust Him no matter how frightening that may be. If anyone can turn a sow’s ear into a silk purse, it’s Him.

What is your current writing project?

Regardless of whether or not the words are flowing, a caramel macchiato (I know, not considered a food) feels delightful between my hands. To celebrate…that is definitely cause for dark chocolate.

Hint: I often mouth praise songs at church so as not to offend anyone. I guess that about covers it.

I enjoy a variety of artists, but the ones that immediately come to mind are Enya, Sarah Brightman, Casting Crowns, One Republic, and Texas. I rarely write to music, but when I do it has to be entirely instrumental or I’ll jump the track of my story to sing along. And there goes my word count…

I think I’d be the type of song that Enya sings—drifty, dreamy, romantic.

Uh…minor? Not being musically minded (the clarinet stint in middle school didn’t stick), I’m guessing on this one. As in…low key?

My introvert tendencies probably peg me in the eyes of others as the mysterious woman in dark glasses; however, more often I feel like the little girl trying to walk in high heels. But then, I never did quite get the hang of balancing on a point.

I’m a dog lover and I know you are too. Please tell us about your pets. What is your favorite dog breed?

We have a Doberman Pinscher that thinks it’s a locomotive and a Shih-Tzu that is best described as a “grumpy old man.” As for a favorite breed, I’m obviously partial to Dobermans and Shih-Tzus, but I do miss our wrinkled old Shar-Pei that passed away years ago.

Thanks, Tamara! It’s been fun having you as a guest—just as much fun as reading your books!