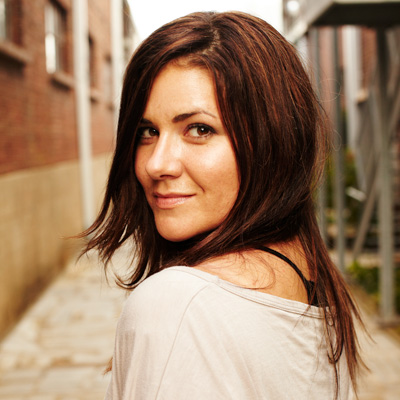 Tara-Leigh Cobble is a worship leader, singer-songwriter, author, and speaker who has performed around the world—or “from Kansas to Korea,” as she likes to put it. She has entertained and ministered at almost 2000 events during the past nine years, encouraging and challenging singles, college students, women’s groups, and youth groups.

In her new book, Orange Jumpsuit, and her latest CD, Morning’s War, Tara-Leigh contemplates one of the most difficult passages in a Christian’s life, the times when God appears absent—and reconfirms that He is with us all along.

Originally from the “backwoods of Tennessee,” Tara-Leigh settled in Manhattan, NY for a while before moving to Greenville, SC, where she now resides.

Which came first, your music or your books?

Music set up shop in my heart pretty early in life. I started writing songs when I was five years old. After a few albums and a couple of years touring, a publisher approached me and asked me to write a book of stories from my life.

Please tell us about an unexpected “detour” in your life that turned out to be positive.

Writing has been an unexpected detour. When that publisher contacted me, I had to take several months off the road to write my first manuscript. I had no idea what I was doing. And while I wasn’t sure how it would end up, the past few years have brought three more books, as well as speaking engagements. It’s been beautiful to watch Him unfold all these plans I never dreamed of.

What part does faith play in your music and your writing?

It’s impossible to extract my faith from any aspect of what I do. Even when I’m writing the songs about pain and loss, I realize that I’m only taking a snapshot of that moment. I think it’s important to honor those moments. But even in the pieces that feel hopeless, the bigger picture is one of hope.

Let’s talk about your new book, Orange Jumpsuit: Letters to the God of Freedom (October 2012, Shrinking Music). Please tell us about it. What’s the meaning of the title?

There’s an obscure Old Testament character named Jehoiachin. We don’t know much about him, but 2 Kings 25:29 says he “put off his prison garments. And every day of his life he dined regularly at the king’s table.”

When I first read that passage, it occurred to me that this was my life story. What are my prison garments? Things like fear, shame, regret, unbelief, control. Too often, I find myself seated at the King’s table… wearing my prison garments. If He’s the King who provides for me, protects me, and wants me in His presence, why would I ever show up wearing garments that carry the stench of death, of my former life?

Orange Jumpsuit is the story of taking off my prison garments. Repeatedly.

What was the catalyst for the book, i.e. for your decision to share your experiences with the world?

My prayer was that people would be comforted and encouraged by the truths He revealed to me as I walked through this season of my life. His truth sets us free.

What’s your best advice for those—young or older—who are in the midst of seeking God’s direction but not finding it?

At the risk of sounding over-simplified, I would suggest seeking God instead of seeking His direction. In walking closely with Him, He will lead you where He wants to take you. 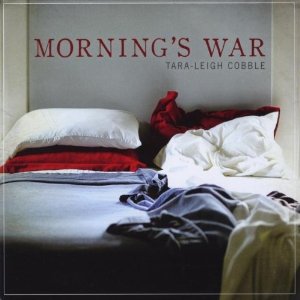 Before we close, I want to ask about your latest CD, Morning’s War. Did you write all of the songs? I can’t seem to stop listening to “Faithful Still.” What’s your favorite song on the project?

Morning’s War is the soundtrack to Orange Jumpsuit. The stories from the book are what inspired the songs on the album. I either wrote or co-wrote all of the songs based on those experiences.

I think “Faithful Still” is a good capstone for the album because it’s the greater truth underneath every disappointment. But my favorite song on it is probably “You Spoke Too Soon.” To me, it captures the most vulnerable moment on the album.

Ice cream will always be first place in my food list. I’m not picky on the brand, but I usually lean toward chocolate-based flavors. I think ice cream is the ultimate fun food. It reminds me of summer and parks and smiles.

I don’t read much fiction, but I really enjoyed Extremely Loud & Incredibly Close by Jonathan Safran Foer. It surprised me how much I liked it. In the print version, he used a lot of creative devices that make it feel like you’re inside the moment instead of just reading the words on a page.

What’s your current favorite song on the radio or mp3 player?

I can’t imagine a day when Coldplay isn’t my favorite band. They have been for a decade now. My favorite song is “Fix You.” But that’s not very current. As for things that are more of-the-moment, I love “You Are Greater” by NewSpring Worship.

That’s a great question. I want to be creative and say I’m a diminished seventh. But I’ll just give you a straight answer here. I think I’m probably a major chord, although I’ve wished to be a minor chord for much of my life. I feel things very strongly and passionately. I have a fire in my bones and in my heart.

This is an even harder question to answer. I think we all see aspects of each of those in ourselves. I feel a lot like the little girl trying to walk in high heels, but I think most people view me as the girl next door, because I’m not very threatening or intimidating.

A life of travel makes it hard to sustain a pet. I think puffins are adorable, but that’s an unrealistic pet. I could get an imaginary pet puffin. That could work.

Thanks, Tara-Leigh. It’s great to have you as a guest at DivineDetour!

Thanks you for such fantastic questions and for all you do to encourage believers! I’m happy to be a part of it!

For more information about Tara-Leigh, including her appearance schedule or to purchase physical copies of her books or albums, visit her website at http://taraleighcobble.com.

To purchase the e-book version of Orange Jumpsuit: Letters to the God of Freedom visit:

To purchase the digital version of Morning’s War, visit: