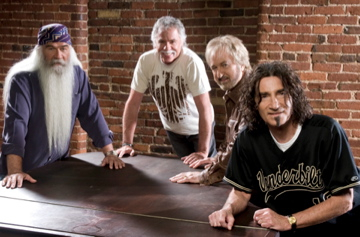 The Oak Ridge Boys have entertained generations of country-pop music fans through the years. In fact, this year they are celebrating the 30th Anniversary of their double-platinum crossover single, Elvira—along with a number of other milestones.

In September, the group released a new CD, It’s Only Natural, which is sold exclusively through Cracker Barrel Old Country Stores. The CD debuted at #16 on the Billboard country album charts. In August, the Oaks were inducted into the Grand Ole Opry. And the group’s 2011 touring schedule, which takes them to fairs, festivals, theaters, and symphony halls, has them performing more than 150 shows throughout the U.S. and Canada.

Joe Bonsall, a vocalist and onstage spokesman for the group—as well as an author and songwriter—stopped by DivineDetour for an interview. 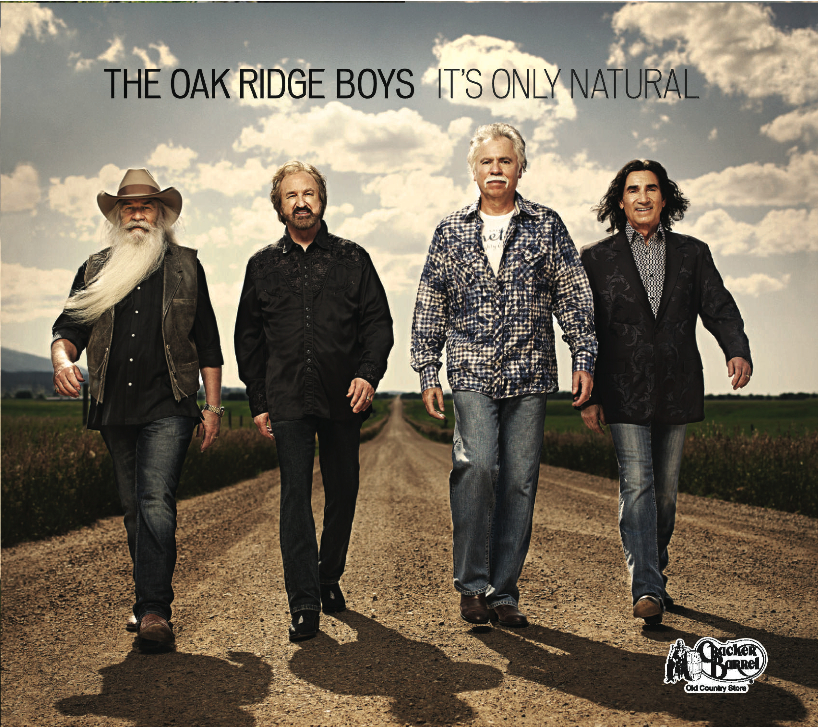 Let’s talk about your new CD, It’s Only Natural (Cracker Barrel, September 19, 2011). Please tell us about it.

I really believe this project represents some of our best efforts to date. Cracker Barrel wanted some hits redone and freshened, so we pulled out songs like Lucky Moon, Beyond Those Years, No Matter How High—and even Elvira, and totally put a new face on them musically. The cool thing is that we added five brand new songs to the mix. Great songs that add to our stage show as well as the CD. It’s Only Natural is available at Cracker Barrel Old Country Stores and online at http://www.crackerbarrel.com/music. I think folks will love it. I humbly admit that I love it!

Great cover. Where did you shoot it?

Cracker Barrel sent an entire force of PR folks to Deadwood, South Dakota to join us on tour and to try to capture some cool photos in the historic Dakota Badlands. The road behind us goes on forever… and ever! It was one of the most creative shoots in our history.

You wrote one of the new songs for the project, a beautiful ballad dedicated to America’s fallen heroes. What gave you the idea for the song?

The song Sacrifice…For Me pays tribute to heroes who have paid the ultimate price for our freedom. Within the three verses I write about a soldier, a Marine, and a NYC fireman… “who gave his life so I can live… in the Land of Free…. raise my kids… live my dreams!” The song is touching a lot of hearts and I am thankful for that.

Sacrifice… For Me has a haunting melody. I’ve often wondered from what deep place a songwriter draws a melody. Is there a way to describe from where it came?

Well, first off I am a simple melody kind of guy. Songs I have written always feature a simple, easy melodic line. If you listen to G. I. Joe and Lillie or Uncle Luther or First Christmas Day and others you will see what I mean. To answer your question the only song I have ever written where the melody came before the lyric was The Journey. That thing pounded in my head until I decided what to write about and added the lyrics. Because of that it was the hardest time I have ever had getting a song just right. With Sacrifice the ideas came and the melody just seemed to come with it. I think this is the first time I have ever written a song with a minor chord in it… smile. 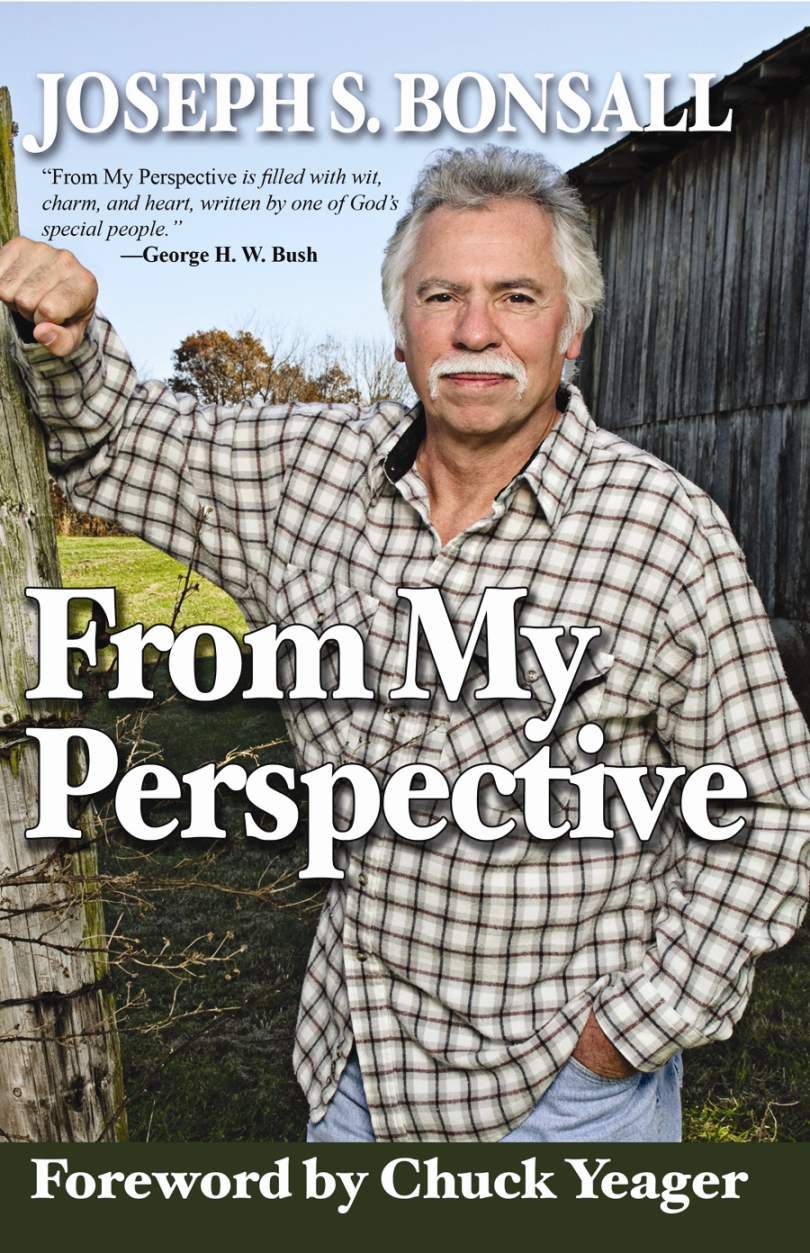 Your latest book, From My Perspective, released late last year (Sheaf House, September 2010). What has been the reaction to the project?

Those who read of my little musings and journeys seem to have been very blessed and encouraged in the writing. I am thankful to God for every word of that book. Oh yes, there is a bunch of humor in the book but there is also a clear pathway on to faith and salvation. I hope a lot more folks get to read it!

(Note: After November 1, study guides will be available for the book. Click on the cover photo to the left to access.)

Detours in life can be frustrating but the outcome is often more intriguing than our original plan. Can you tell us about a recent “detour” in your life?

The latest detour was a great one. We thought the Cracker Barrel project was not going to happen and it was very disappointing, because we had such high hopes. But then some new people came into their corporate structure and took a survey that placed us near 100% of the kind of name recognition they were hoping for, and beings Cracker Barrel wanted to get even MORE involved with music, the Oaks seemed like a good choice. So BOOM…  we were back on the table, and I think that delay was all for the good from a recording standpoint. It was a NICE DETOUR for certain for The Oak Ridge Boys.

After America by Mark Steyn. Very scary but a great, well conceived read.

The Oak Ridge Boys singing What’cha Gonna Do from It’s Only Natural. Also really digging on Amos Lee these days.

Well, so far I am happy it isn’t Job. I love when Jesus told the men in the boat during the storm,“It is I… be NOT afraid.” We all fear so many things but faith in Christ can eliminate fear on every level.

I like autumn… always have. The crisper air, the color of the leaves. At 63, I am in the autumn of my life here right now, and I am very thankful for the springs and summers. I hope winter takes its time getting here but, alas… our life is but a vapor and my little vapor seems to be cruising right on along.

You and your wife Mary are animal lovers and have established a foundation to assist in animal causes. Can you tell us about the foundation?

The Joseph S. and Mary Ann Bonsall Foundation was started with the success of my Molly The Cat book series in the early 90’s. We give to humane animal shelters and education projects and literacy causes. We are a small foundation, but we have managed to do some good works. Learn more at www.josephsbonsall.com and click on Foundation.

Thanks, Joe! It’s nice to have you back at DivineDetour.

An honor to have been invited back! God bless!

To purchase It’s Only Natural logon to http://crackerbarrel.com//music/artists-and-albums/oak-ridge-boys/

To purchase From My Perspective, logon to: