Ace Collins: Jefferson Burke & the Secret of the Lost Scroll 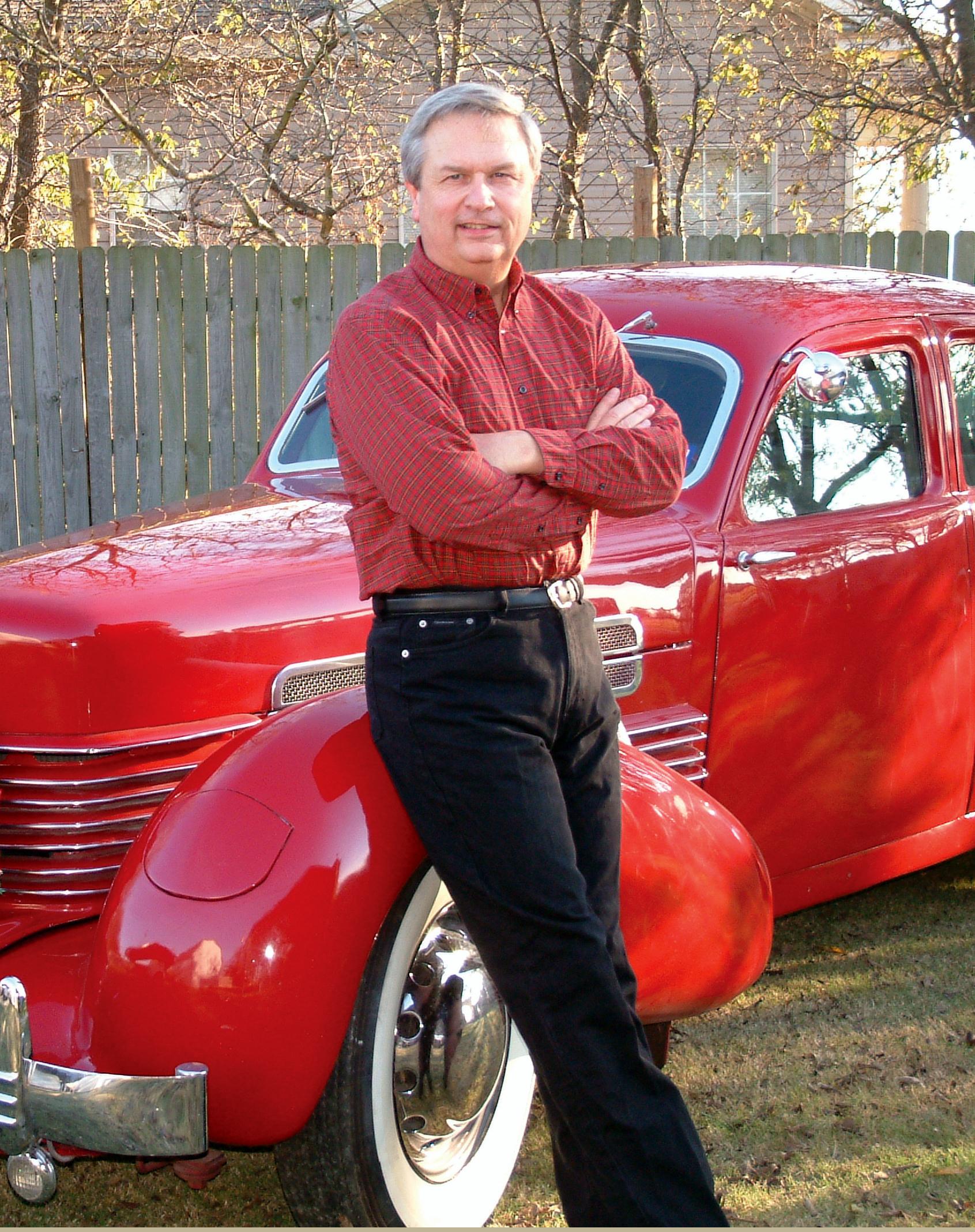 Ace Collins defines the word writer. Having written or contributed to more than sixty books in the past twenty-five years, he is also the embodiment of the word prolific.

Ace’s debut novel, Farraday Road, was released in 2008, the first of his mystery-action adventure series based on the exploits of Arkansas lawyer Lije Evans. Ace recently agreed to create a new action-adventure character for Zondervan. The first book, Jefferson Burke and the Secret of the Lost Scroll, releases today.

Ace and Kathy, his wife of thirty-five years, reside in Arkadelphia, Arkansas. They have two sons, Clint and Rance.

I have been a reader since I was a little kid. Wrote my first short story in third grade. So I have always had an interest in writing, hence my college major in Journalism and minor in English. Getting out of school I worked in public relations, taught high school English, and coached basketball, but I was always doing freelance writing. I finally got the break to turn it into a career when Louise Mandrell asked me to write The Mandrell Family Album with her. From there things evolved, and I have been blessed to have had a part in more than sixty books.

What an interesting question! I starved to death as a full time writer for my first decade or so, but every time I was about to give up and go back to a real world job, one of my friends in the country music business got me another gig writing a freelance story. So God placed challenges in my life to test how badly I wanted to live my dream, and friends where there to lift me up when I was about to bail.

Let’s talk about your new book, Jefferson Burke & the Secret of the Lost Scroll (Zondervan, June 28, 2011). Please tell us about it.

It is the ultimate adventure/mystery/action/romance novel. I kind of think of it as National Treasure meets Indiana Jones meets The Di Vinci Code. A university professor, who at the beginning has few heroic qualities and no belief in God, is caught up in a race to find a lost Bible book written by Joseph the earthly father of Jesus. The Christian church doesn’t want it found, because they fear that Joseph will claim to be the biological father of Jesus. Thus, those who want to destroy the basis of Christian faith can’t wait to find it.

Jefferson Burke starts the adventure only wanting to save the lost book for its historical significance but, through a series of events, takes a deeper look at faith. Along the way he also finds himself falling in love with a former Army Ranger turned FBI agent named Lisa Marie Cho. Beyond those two there are a ruthless villain, the grandson of a Nazi SS officer, and a host of unique characters who show up along the way. The book takes us from the plains of Illinois to London, Washington D.C., Nashville, Afghanistan, San Francisco and climaxes on the same mountain in Nevada where the actress Carole Lombard died in a 1942 plane crash. And, even though it is set in modern times, a vintage DC-2 and a classic Packard play important roles in the mystery. 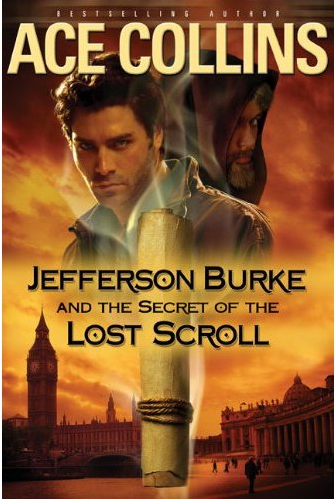 I was fortunate to be able to read an advance copy of the book. It’s a great, fast-paced read with compelling characters. Where did you get the idea for the story? Is this the first book of a series?

I hope it is the first in a series. That will depend upon sales. I love the characters so I want to write more, and I do have another one outlined.

On the idea — I love history and have long been fascinated by the Dead Sea Scrolls. All of that came together one day when I was considering the lack of real information we had on Joseph. On top of that, I had written a series of novels based in Arkansas, and I have always wanted to do one based in my other boyhood home state of Illinois. Thus I brought all those elements together in this book. If there is a consistency in my novels it is in having heroes who have to grow into their roles. I do that because I not only think it adds depth to the characters, but also because I want folks to realize that God gives us the ability to grow into any challenges we face. So readers will get to watch Jefferson Burke grow as the book goes on.

Another important element of this book is that it is not typical Christian fiction. The faith elements are there but subtly introduced. I wanted to write something without profanity or sex that would still appeal to the secular audience too — so it had to be a great, compelling story. Put another way I didn’t want to preach to the choir. I wanted to get regular fiction readers, who would never read a typical Christian novel, to consider faith when presented in a different way. I am hoping this book does that too.

You have a number of books releasing within the next year. What’s up next for you?

I just finished two novels, set in an average size American community, that revolve around social and moral issues, including cosmetic surgery, assault, abortion, child abuse, stalking, and drunk driving. The working titles on these books are Darkness before Dawn and The Cutting Edge. They will be published by Abingdon next year. I am also doing a Christmas novella for that company called The Christmas Star that involves a wife who remembers her husband during the holidays by hanging his Congressional Medal of Honor on her Christmas tree each year. Both of these concepts are slated for future projects in the series.

For Barbour, I am penning a novel set in the years leading up to World War II, and then concluding in the early days of that war, that uses a 1936 Packard as the driving plot element. It is a mystery involving a kidnapped child and a large amount of missing money. As the car passes through five different owners the clues are revealed that solve the “who dun it.” The working title is The Yellow Packard.

All writers deal with rejection at some point in their career. Do you have a classic rejection story? What is your best advice for young writers who are dealing with rejection?

Most interestingly, my rejection story is the book that really cemented my writing career, The Stories Behind the Best-Loved Songs of Christmas. This best seller took ten years to find a home and was rejected twenty-seven times. So that was a huge test that taught me never to give up on something I really believed in — when the time is right, God will open the door. And this goes beyond writing; it even applies to witnessing to others about faith.

I’m pretty simple. Give me a bottle of Coca-Cola and a hamburger, and I am happy. I also love anything with peanut butter in it. And, as I cook a great deal, I am always looking for ways to use peanut better in new ways. You will find in my novels that my characters often eat like I do. Lije Evans, the hero in Farraday Road and Swope’s Ridge, eats peanut butter mixed with syrup and spread on toast for breakfast, and he drinks a Coke with that meal. That is my normal breakfast as well.

If I am going out to eat to celebrate I would go to either The Texas Roadhouse or Steak ‘n Shake.

This website features musicians as well as writers. You have written a number of music related books. Do you have musical, as well as literary, talent?

I am a pretty good singer, play guitar, and like to vocalize with other folks. I love all kinds of music from Big Band to country to show tunes. I have a 1959 Wurlitzer Jukebox that I keep stocked with 45’s from all the different eras. At Christmas, the jukebox is filled with holiday classics. I also love to visit with songwriters about where their ideas come from. It amazes me that they can tell a complete story in two or three verses and a chorus, when it takes me more than 100,000 to do the same thing. Now that is talent!

My first impulse was to answer rockabilly, but then I thought I am really more gospel or country. But when I really look deep inside myself I realize that I am fascinated by people and their stories; so I guess that makes me a folk song.

I think a little differently than most folks; because of that perspective, I often see things that others miss. That goes with being a writer. So that must mean I am a minor chord.

I have never grown up, never quit dreaming, never given up on my passions, and have this great faith that everything will turn out OK. Plus I laugh all the time. So that makes me a child in an adult’s body.

We have three rescue cats and one collie dog. Buffy, who is thirteen and was dumped on our doorstep when she was about six weeks old. T.C. (stands for The Cat) was the product of a feral mother and father. We found him in a trash pile just after he’d opened his eyes. He is a six-year-old tabby. Our youngest cat was abandoned by his mother after a flood. We bottle-fed him for weeks, and he is now two. His name is Tiger, and he has the markings and personality that go with the name.

One of the great benefits of having done two books with the folks who own and train Lassie is that we always get a puppy from each new generation. Baby is five and is a part of the tenth generation of the famous line. So, go back that many generations, and her grandfather (with seven greats) was the collie in Lassie Come Home. Her brother is the current Lassie, and her father was Lassie IX.

Thank you, Ace! It’s great to have you as a guest at DivineDetour!

For more information about Ace, visit his website at http://www.acecollins.com/.

To purchase Jefferson Burke and the Secret of the Lost Scroll logon to: