Allison Pittman’s Stealing Home recently won the ACFW Carol Book of the Year award in the Long Historical category. She is also the author of the Crossroads of Grace Series and made her nonfiction debut in 2008 with Saturdays with Stella, a lighthearted, faith “training” manual for humans that was inspired by her dog, Stella. Her latest book, For Time & Eternity, is the first in her Sister Wife Series.

A former high school English teacher, Allison is now a full-time author and speaker. She also directs the theater arts group at her church and is co-president of a Christian writers group in the San Antonio, Texas, area, where she resides with her husband and three sons. 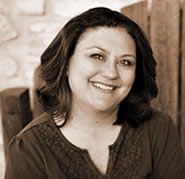 When did you first pursue writing?

I began to pursue writing seriously about five years ago—that’s when I resigned from a teaching career of nearly 20 years to devote myself to this new direction God had given me. I’d toyed with the craft for years before that, but it wasn’t until I’d landed my first contract that I considered it a career.

Wow…In the Christian market, my absolute hero is Lynn Austin. I love how she’s been able to write historical and contemporary, not being bound to a “type” of book, rather crafting one amazing story after another. I’d never read a Christian novel (other than Christy which I think is practically required reading for Christian high school girls…). But I won a copy of Austin’s Eve’s Daughters, and I knew that I wanted to pursue this. I’ve often thought, what if I would have won a book not nearly so wonderful as that one?

What was your big break?

I sold my first series—The Crossroads of Grace—at the Glorieta Christian Writers Conference, after pitching the first book to an editor from Multnomah. I’d been attending the conference for years, just studying the craft of writing. My break came the same way any other writer’s break comes about: a matter of God’s perfect timing in light of obedient preparation.

I pray for a miracle with every deadline! Seriously, I am so humbled by God’s mercy. Like, every now and then I feel so completely unworthy of His grace. I think that helps me in my portrayal of my less-than-lovable characters. Like Gloria, the protagonist in my first novel. She is an unrepentant prostitute, and I love her. And readers love her. I can grant grace to my “sinners,” because God has granted grace to me.

Well, our youngest son was a total surprise! But, really, I have a hard time pin-pointing “detours” because I’m really not much of a planner. More than anything, my life is a series of pleasant surprises and miraculous revelation. 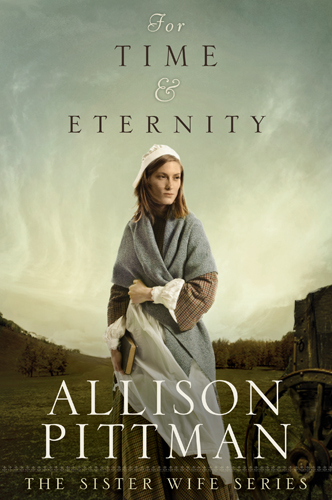 Let’s talk about your new book! For Time & Eternity (Tyndale House, September 2010) is the first book in The Sister Wife Series. Please tell us a little about it.

For Time and Eternity tells the story of a young woman, Camilla, raised in a Christian home, who finds herself seduced away from her family and her faith when she falls in love and runs off to Utah with a charming Mormon named Nathan Fox. Years later, as a wife and mother, Camilla’s heart is turned back to Christ, but she is trapped in a home ruled by a faith that would allow her husband to bring in a second wife.

Where did you get the idea for this book and the series?

I knew that I couldn’t rest the entire book on just the fascination we all seem to have with polygamy. I wanted it to be the story of a marriage—one between two people who have a genuine love for each other. On the question of a second wife, it seemed to me that those early Mormons who truly, dearly loved their wives were just as torn with the decision to take a second one as we imagine their wives were. Both Nathan and Camilla fight the same battle; they simply fight it next to each other.

Besides providing entertainment, what is the one thing you hope readers will take away from the book?

For one thing, I would like them to cultivate a love for the Mormon church, just as much as we have a love for any other lost person, because they are so, so lost. I’m hoping that, as they see Camilla grapple with some of the false teachings, they will gain an understanding of the LDS allure, and find new appreciation for the freedom we have in Jesus Christ.

You are a former English teacher and a speaker who encourages other writers. If you had only one minute to spend with an aspiring author, what would you want to tell them?

The word “no” doesn’t contain enough letters to answer that question. None, really, and I am surrounded by a family who wishes I would remember that whenever I burst into song.

I think I might be the only writer in the world who doesn’t. When I’m writing, I need either (1) silence, or (2) non-specific crowd noise. I love to write in restaurants, airports, anyplace where I have to force myself to focus.

I would be a spontaneous, multi-faceted, splashy musical number—you know, where a crowd of strangers suddenly bursts into choreography and back-up singing. My dream life is Glee.

I never have anything that together. I’m a scale.

Hmmm…I think I’m the little girl who thinks she’s a super heroine—kind of charging around, oblivious to the idea that she can’t do everything she thinks she can! 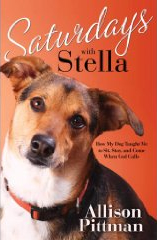 I’m a dog lover, so I have to ask about the non-fiction book you wrote about your dog Stella (Saturdays with Stella, Multnomah, 2008). Please tell us about Stella and the book she inspired. Do you have other pets?

Ah, my Stella-bella. Stella is the world’s most neurotic, insecure dog in the world. After about a year, when we just weren’t getting along at all, I took her to an obedience class. Our instructor’s first words were this: “A dog who doesn’t trust you won’t obey you. With trust comes obedience. Remember that: Trust and Obey.” Well, as a good ol’ Southern Baptist girl, those words hit home, and I knew the Holy Spirit had brought me to that class for a reason. The parallels between teaching a dog to obey its master fit so perfectly with how we are to obey our Master, I just couldn’t ignore them.

And, yes, we have two cats—Mandie and Clancie—who have the personalities of a pampered cheerleader and a cranky gym coach, respectively. Stella pretty much refuses to acknowledge their existence.

Thank you, Allison! It’s a pleasure to have you at DivineDetour.

For more information about Allison, visit her website at http://www.allisonpittman.com/.