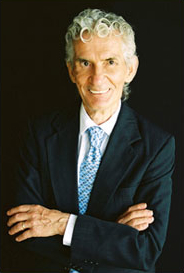 Cecil Murphey has sold millions of books and won numerous awards, but it’s his compassion for others that best defines him.

While maintaining a rigorous writing schedule—six books published in 2010, and five scheduled for 2011—Dr. Murphey travels extensively to speak on topics such as spiritual growth, recovery, caregiving, significant living, and male sexual abuse. He is widely respected for his selfless mentoring of other writers.

Cecil Murphey has co-authored a number of autobiographies and books for well-known personalities, including Dr. Ben Carson, renowned pediatric neurosurgeon (Gifted Hands: The Ben Carson Story—which has been made into a movie starring Oscar winner Cuba Gooding Jr.—and Think Big); singer B.J. Thomas (In Tune); Franklin Graham (Rebel with a Cause, for which he won the 1995 Gold Medallion Award); and Norman Vaughn, the last survivor of Admiral Byrd’s Antarctica Expedition (With Byrd at the Bottom of the World). He also co-wrote with Don Piper 90 Minutes in Heaven, a book that has sold more than five million copies and appeared on the New York Times’ bestseller list since October 2006.

You’ve written or co-written more than 100 books, yet writing isn’t your first career. How did you get started writing?

Like many others, I can’t remember when I didn’t want to write. I didn’t get serious about writing until the year after I finished seminary. The late Charlie Shedd flew into Atlanta every Monday night for ten weeks to offer a course at the seminary on how to write for publication.

Charlie encouraged me, told me I had talent, and suggested I start an editing group. I started and ran the Scribe Tribe for nine years. I sold the first article I wrote (after 18 revisions) and that gave me the courage to keep writing.

My faith is such a part of me, I don’t think much about connecting it with my writing. I believe that my attitude and behavior show my faith. I talk about Jesus Christ but do it when it flows naturally.

For instance, I recently spoke to a dozen therapists (most weren’t believers) about my book, When a Man You Love Was Abused. One of them asked me about forgiving others.

“I call myself a serious Christian,” I said. “So I have to express forgiveness from that perspective.” I talked about grace and being forgiven and thus being able to forgive those who had hurt me. They seemed to respect my answer.

The biggest detour occurred after I finished seminary. I had an MA in education, had taught in the public schools two years, and finished at the top of my seminary class. I received a scholarship to work on a PhD. My intention was to earn my doctorate and teach Greek and New Testament in a seminary or a Christian college.

Two things happened. First, I became a part-time pastor of a small, dying church. I had never thought of myself as a pastor. I realized I absolutely enjoyed interacting with the congregation. The membership doubled, and I soon went full time.

The second thing is that Charlie Shedd encouraged me to write and that detoured me from my doctoral program. After a year of study on my doctoral program I dropped out so I could focus on being a pastor and on writing for publication.

I spent 14 years as a pastor, and I wrote during 13 of them. I sold more than 300 articles and produced 12 books. My writing grew largely because of my interacting with hurting people.

Eventually God led me to write full time and I’ve been doing that for 25 years.

Let’s talk about your new book, Knowing God, Knowing Myself: An Invitation to Daily Discovery (Regal, December 2010). Please tell us about it.

The book is a series of aphorisms—short, pithy sayings—and a brief explanation of each one.

The sayings grew out of my intense search for intimacy with God. When I pray, I try to formulate my praise and my petitions concisely.

From day to day, I mentally revised them. For years I wrote the words on 3×5 file cards. I’m a runner and, even today, I pray those words when I run.

Even though they began as petitions, most of them ended up in statements. They express my spiritual battles I’ve gone through. I began to collect them and I now have more than 400.

•  I’m passionately involved in the process; I’m emotionally detached from the result.

•  I would rather be disliked for who I am than to be admired for who I’m not. 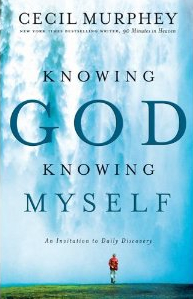 Where did you get the idea for the book? What did you learn during the course of writing it?

Steve Lawson, at Regal Books, asked me to write my autobiography, which I declined. He heard me give keynotes at two writers conferences and I quoted a few appropriate aphorisms. After we talked about what I often call my affirmations, he asked me to write a book explaining some of them. That’s what I did.

The idea for the book started before I spoke with Steve. For several months I had been thinking about the connection of knowing God and knowing myself. As I grew in awareness of God, I changed; as I matured, I realized it affected the way I perceived God.

My learning came before the writing, of course, but in explaining the sayings, I gained deeper insights into some of the words I had already written. (I returned to re-praying a few of them that I had moved away from.)

I understand that you have five books scheduled for release in 2011. What’s next?

Getting to Heaven: Departing Instructions for Your Life Now is next. This is my fourth book with Don Piper for whom I wrote 90 Minutes in Heaven. (That book is now on its fifth year on the New York Times’ best-seller list and will be a theatrical film by the end of 2011.)

We thought about John’s Gospel, chapters 13-17, when Jesus is alone with his disciples. He knows his end is near and this is the last time he’ll be with them before his death. What he says to them are the words that must strengthen and guide them in the years ahead. This is like having a dying person call the family to the bedside for a farewell.

I also write gift books and two of them scheduled for 2011 are When Someone You Love No Longer Remembers—a book to help friends and families of those who suffer from dementia. The other gift book is about long-term caregiving. I’m writing it with my assistant, Twila Belk, and it’s titled, Because You Care.

Besides writing, you’ve been called to encourage others—as an international speaker, a radio show host, a teacher, and a mentor. How do you find the time?

I don’t find time. Working with people is an important part of my life. God made me quick—and Africans used to call me Haraka, which means fast or speedy. God also gave me an extra dose of energy, and I’m highly self-disciplined, so I produce a lot during my working days. It’s simply being who I am and using the gifts God gave me.

I’m not much of a food person, but peanut butter rests at the top. I put it in my cereal and on anything else where I can eat it.

A friend gave me a gift pack of peanut butter to take on the road with me when I travel.

Why peanut butter? I have no idea except it’s a taste I’ve never outgrown.

I took piano lessons, but they didn’t take to me. My wife plays piano, organ, and is best at the accordion. Our three children play instruments. Our son was a professional singer and played lead guitar for a few years.

I  know how to clap in time to the music—most of the time.

I’d be a song about stretching out my arms and hugging people, especially those who hurt or who feel unloved and alone.

I’m absolutely a major chord. Except for a few minor classics such as Dvorak’s New World Symphony, I listen to and sing almost nothing in the minor chords.

None of the above. I’m the hero’s best friend, the second lead, and the one who pushes his buddy forward.

I’m a dog lover. Can you tell us about your pets—if any? Or do you have a favorite pet from the past?

We used to have dogs, but after our children left home, Shirley and I traveled a great deal and haven’t owned pets since.

Our second daughter lives with us and she has a dog to whom I sneak dog biscuits.

Thank you, Dr. Murphey. It’s a special honor to have you at DivineDetour.

For more information about Cecil Murphey, visit his website at www.cecilmurphey.com.

To purchase Knowing God, Knowing Myself and other books by Cecil Murphey, logon to:

– A website dedicated to helping men who have been sexually abused, www.menshatteringthesilence.blogspot.com.

– A blog for writers, www.cecmurpheyswritertowriter.blogspot.com.

– A radio show, Cec and Me, featuring Cecil Murphey and Twila Belk, http://toginet.com/shows/cecandme.