Bestselling, award-winning author Irene Hannon has been honored with two RITA awards—the “Oscar” of romantic fiction—and is a six-time RITA finalist. Her books have also won a Daphne du Maurier, an ACFW Carol, a HOLT Medallion, a National Readers’ Choice Award, and many other prestigious honors.

Irene holds a B.A. in psychology and an M.A. in journalism. For many years she worked in an executive communications position with a Fortune 500 company, juggling two careers until she finally left her “day job” to write full-time. She is the author of more than forty books.

She and her husband make their home in Missouri.

The “when did you decide to become a writer?” question always makes me smile, because I didn’t decide to become a writer. I was born a writer. I think writing, like many other talents, is a gift. For example, much as I wish I could draw, no matter how many lessons I might take every person I tried to sketch would still end up being a stick figure. I just don’t see with the eyes of an artist. I think writing is like that. But I do like to tell people that I launched my professional writing career at the age of ten, when I was one of the honorees in a complete-the-story contest sponsored by a national children’s magazine!

I had a similar question not long ago, phrased slightly differently. The person asked how I add faith to my stories. The truth is, I don’t. I simply write from my worldview. The faith in my stories is organic to the characters; it’s part of who they are, and as such, influences all of their choices and decisions. The people in my books spend a lot more time living their faith than talking about it, so it’s a rather subtle element in most of my stories. 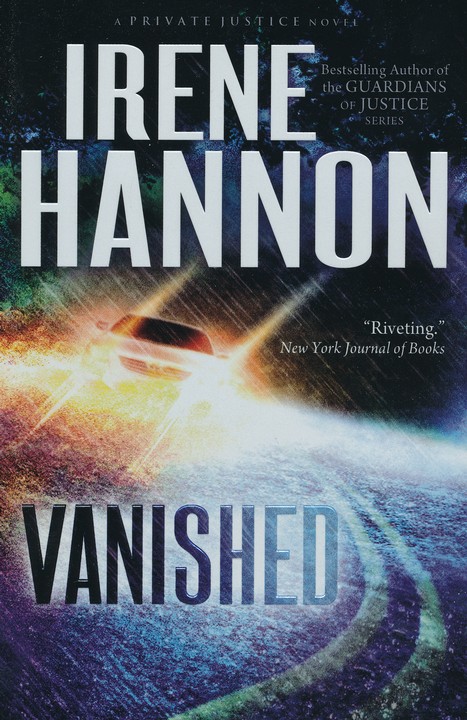 Let’s talk about Vanished (Revell, January 2013), the first book in your Private Justice Series. Please tell us about it.

My new series feature three ex-law enforcement operatives who’ve banded together to form a PI firm. In Vanished, Pulitzer-prize-nominated reporter Moira Harrison hits a pedestrian on a rainy night in a wooded area—only to have both the victim and the good Samaritan who stopped to assist disappear. The police dismiss her story, so she turns to P.I. Cal Burke, an ex-homicide detective, to help her sort out the puzzle. He’s more than a little skeptical . . . but as clues begin to surface, bringing them closer to answers, the danger mounts. Because someone doesn’t want this mystery solved—and will stop at nothing to protect a shocking secret that will destroy a life built on lies.

A literal detour sets up a harrowing journey for your character Moira Harrison, but sometimes detours can put us on a positive path. Can you tell us about a detour in your life?

Detours can absolutely be positive—though sometimes we only realize that in hindsight. Using my writing as an example, a few years ago during my corporate days some major changes at work put me on a different career path than the one I’d planned. An unwelcome path. At the same time, I’d risen in the ranks to an executive level, and my job left no time or energy for writing. In fact, I went a whole year without any writing fiction. The unexpected detour in my corporate career was very, very stressful—yet it gave me the impetus to make a monumental decision: I left the corporate world, with its perks, politics and prestige, to write full time. It was a very scary new path—but looking back, I don’t have a single regret. Had I not left that job, I would never have had the time to delve into the world of romantic suspense, which gave my writing career a phenomenal boost.

Journalist Gene Fowler once said, “Writing is easy: All you do is sit staring at a blank sheet of paper until drops of blood form on your forehead.” What do you find to be the most difficult part of writing—and how do you counteract it?

I love that quote and often use it at speaking engagements! It is SO true. For me, the hardest part of writing is the initial development stage, which requires heavy-duty thinking. Even though I know it’s necessary, it’s painful—and it feels very unproductive. Once I start putting words on paper (or the screen), though, things begin to smooth out. Still, generating the first draft is hard, hard work for me—and there’s no way around it. I just have to sit in my office and do it. On the flip side, my favorite part is editing my work. I love taking the raw stuff I create and honing it one word at a time until the story sparkles.

Hmm. I’ve never really rewarded myself with food or used it as an incentive. However, I do love to start the day with one of my favorite comfort meals—home-baked bacon-cheese cornbread and a cup of hot chocolate. That’s been my breakfast for almost as long as I can remember. I like the predictability and routine of it, since so much of the rest of life is unpredictable!

I LOVE to sing. I studied voice while I was in college and graduate school, took tap and ballet for many years, and I’ve been performing since my days of backyard shows when I was the writer, producer, director and star! These days, I perform in community musical theater productions whenever I get the chance. I’ve been very lucky to play the leading role in many classic musicals, including Oklahoma, Brigadoon, The King and I, South Pacific and Anything Goes, to name a few.

An upbeat tune or romantic ballad from one of the classic musicals like those listed above. Cockeyed Optimist and Till There Was You come to mind.

My first impulse would be to say girl next door, but I also think of myself as strong and independent and capable. At the same time, there are days when I’m the little girl trying to walk in high heels. I’m kind of a study in contradictions. But really, aren’t we all an amalgamation of many different types?

I don’t have a pet now, but we had a wonderful dog when I was child. She was a stray who was abandoned by her mother near our garbage can on a cold winter night, a shivering little fluff ball of golden hair. I’ll never forget her soulful, intelligent brown eyes. We had her for about fourteen years, until one night she disappeared as suddenly as she’d come. We searched and searched, but she’d vanished. It was a sad, sad day in our house.

Thank you, Irene! It’s a pleasure to have you as a guest at DivineDetour.

Thank you for inviting me. It’s been great!

By the way, if anyone would like to view the trailer for Vanished, they can find it here. I’d also like to share some very exciting news. Vanished was named one of the best new books in January—and a top-ten romance release—by Amazon. In addition, it’s currently on numerous bestseller lists, including Publishers Weekly. Can you tell I’m thrilled!  : )

To purchase Vanished, logon to: