Lisa Carter is a writer, teacher and speaker whose articles have appeared in FamilyFun, Thriving Family, MomSense, and Christian Parenting Today. Lisa earned a Master’s degree in History, but twelve years ago her childhood passion for writing was re-ignited when she won the Mothers of Preschoolers (MOPS) Story Writing Contest. Her debut novel, Carolina Reckoning, was released earlier this year. Her second book, Aloha Rose, will release next week.

Lisa and her husband, David, have two daughters and reside in North Carolina.

I’d written my entire life for my own amusement. At the age of forty-five, God put a story on my heart that became Carolina Reckoning. So I wrote it never expecting anyone to ever buy it. I attended my first writer conference and pitched my ideas to editors, never expecting anyone to buy them. But they did. God put the calling upon me; He has been faithful to supply all I needed for the journey.

My ultimate desire is to proclaim the truth of God’s Word, His redeeming love as seen in the life of Jesus Christ and to help readers know for themselves this great, awesome God of all comfort and wisdom. He is enough for every need. 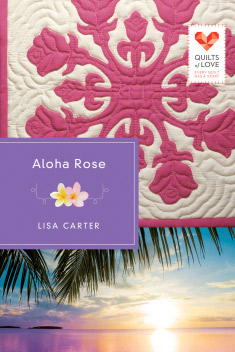 As a debut novelist, you’ve had two books published this year. Let’s talk about Aloha Rose, which releases this month as a part of the Abingdon Press Quilts of Love Series. Please tell us about the book.

When Laney Carrigan sets out to find her birth family, her only clue is the Hawaiian quilt in which she was found wrapped as an infant. Centering her search on the Big Island and battling fears of rejection, Laney begins a painstaking journey toward her true heritage. Helicopter pilot/Hawaiian cowboy Kai Barnes, however, is determined to protect the people he’s come to regard as family. He thinks Laney is nothing more than a gold digger and blocks every move she makes toward her Hawaiian family. As their conflict escalates, it puts at risk the one thing that Kai and Laney both want most—a family.

During my college years, I had a close friend who shared with me her struggles concerning her adoption as a baby. Although she had wonderful adoptive parents, she was left with lingering unanswered questions about her identity. There was a void within her. Years later, we reunited and she filled me in on the rest of her story. As an adult, she’d located her birth family and her father was Hawaiian. She and her family had come full circle. A few days later, my agent sent me a request from Abingdon Press for story proposals for the Quilts of Love line. This series is built upon the premise that “behind every quilt there is a story.” I’m a quilter and I know Hawaiian quilts are visually distinctive from other quilt forms. And with my friend’s recent life story still fresh in my mind, that day the seed of Aloha Rose was born.

Did you include any fun quilting tidbits in the story? Did you learn anything about quilts in the process of writing the book?

The first rule of quilting Auntie Teah tells Laney as she attempts to learn to quilt in Aloha Rose is “Don’t get blood on the quilt.” I actually created the Lokelani design, which is the quilt that appears on the book cover. I’d never attempted something of that size before and my hand applique skills grew as a result.

I think quilting—I only learned to sew after my children were born—taught me patience, persistence, and gave scope as Anne of Green Gables would say, to my imagination. It takes an incredible amount of discipline to see a project through to the end—as does writing. There’s parts to quilting I like better than others. I love creating quilt designs just as I love crafting characters and story worlds. I love selecting the fabrics and piecing the quilt top. I love researching my stories and watching the lives of my characters unfold from my imagination to the page. But after I’m done with the top—as far as putting the quilt sandwich together—I’m done emotionally with the quilt and if it is a big project, I usually pass the quilt along to someone else to stitch together. My friend and fellow author, Rosanna Huffman, hand quilted the Lokelani quilt for me. 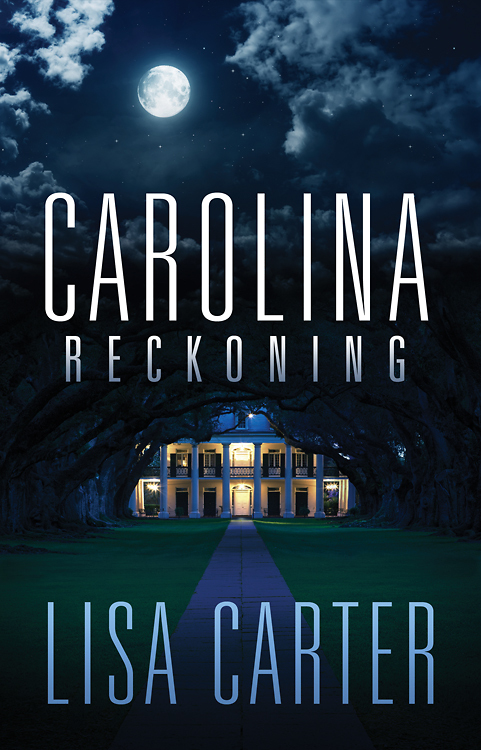 Your debut novel, Carolina Reckoning, released this summer (Abingdon Press, August 2013). Please tell us a bit about it.

Years ago, I worked as a staff docent at an antebellum house. Being an avid fan of mysteries and romantic suspense, I began to wonder what if a murder were to occur in this uniquely Southern setting. Scratch beneath the surface of the polite Southern drawl and hospitable sweet tea, there is a layer of the gothic—Southern Gothic—in our history. Family stories of lost causes, tragic love, and quirky Aunt so and so’s, we’ve all got them.

Alison Monaghan never gets to confront her husband with the proof of his infidelity when his body is found on a lonely backcountry road near antebellum Weathersby Historic Park. Homicide detective Mike Barefoot immediately puts Alison at the top of the suspect list. He’s learned to keep his emotional walls high and he knows better than to get involved with a murder suspect. But despite his best intentions, he finds himself drawn to her and to her two teenage children. Can he fight his feelings for her—and find the killer before Alison becomes the killer’s next victim?

Carolina Reckoning is for who’ve ever felt alone or faced an unknown future. For those who’ve felt abandoned and betrayed by a friend, spouse or family member. It is the story, in a small way, of my life. The story of my own journey toward faith.

Detours in life can be frustrating—kind of like plot twists in the stories we write—but the outcome is often more intriguing than our original plan. Can you tell us about a “detour” in your life—or in one of your character’s lives—that turned out to be positive?

My whole life has been a detour. I’ve always taken the scenic route; the road less traveled. I’ve never been one to take quickest path from point A to point B. Here’s an example: My husband and I were driving through Ireland a few years ago. That year, for whatever quirky reason, I was on the hunt for Celtic crosses. I have no problem stepping off the grid, departing from the itinerary of life to take whatever new paths open up. We found on this voyage of discovery stone crosses in the middle of cow pastures, met famers who took us on their private land to view ancient stone structures which housed the earliest of Ireland’s Christian converts. We ventured off the beaten path and discovered charming, whimsical villages. So much joy, so many delightful memories we’d have never known if we’d stuck to the tried and true. It’s kind of the way I’ve lived my life, too. The way I’ve encouraged my children to be open to the joy of discovery.

I’ve never met a potato or piece of bread or chocolate, I didn’t love. : )

You are also a church worship leader and teach music. If you were a song, what kind of song would you be?

I often compare writing to music. Each story has a flow of sound, like music. A unique beat, rhythm, tone. Part of this is the writer’s individual voice, recognizable throughout their entire body of work if you listen/look carefully. Some singers have a crystal clear quality of tonality like Julie Andrews. I think of it as a bubbling, high arching fountain. Others, a deep, full sound like Etta James with a rich, Mississippi River quality.

The story itself also impacts the rhythm or beat of the music. Some novels will start out fast, hard-hitting, leaving you breathless on the edge of your seat as you turn each page. Other books begin at a slower pace with a tease, a promise, a building crescendo of tension or romance.

Music inspires me as I develop characters and plot. I usually identify a song that sums up for me the entire feeling of a character’s story arc or as an overriding theme for the book. I listened over and over to the mellow sounds of Brother Iz Kamakawiwo’ole’s Over the Rainbow during the writing of Aloha Rose.

As for my personal song? There have been high notes of joy and sheer ecstasy. There have been dark tones of angst and tragedy. Through it all I’ve kept singing, in the joy and the pain. My life has been a song of praise to my Savior and full of the grace notes of His Presence.

Several years ago as part of a school assignment, my youngest daughter had to interview her parents as to what they wanted to be when they were twelve year’s old. I immediately said, “Indiana Jones.”

She frowned. “Indiana Jones was a boy.”

“Well,” I countered. “I wanted to be a female Indiana Jones.”

I still do. And the beauty of writing is that I get to vicariously experience a dozen or more lifetimes and/or roles. I’ve been all of these at one point or other—girl next door, mysterious woman, superwoman and little girl in heels. But I think in each of them and in me there is a core strength.

There is a lot of truth to the term “steel magnolias.” My favorite quote is from Roy Chapman Andrews, the real life model for the fictional Indiana Jones. He said, “Always there has been an adventure just around the corner—and the world is still full of corners.”

I’m always looking around the next curve in the road for the next adventure.

We have a gray bunny named Buddy who has lived with us six years. I had a collie when I was little named Pup. He vanished when I was five. I’m not sure I’ve ever emotionally moved beyond this loss. Probably why I’ve never made an attempt to own another dog. But animals love me; I’m not sure why. I pay them no mind most of the time. I’ve always spent far more time with babies and children.

Thanks, Lisa! It’s great to have you as a guest at DivineDetour.

To purchase Aloha Rose, logon to: