Loree Lough ~ From Ashes to Honor

Loree Lough has eighty-two published books with more than 3,000,000 copies in circulation. Through the years, her books have earned hundreds of “reader’s choice” awards. She enjoys sharing insight about the writing craft with other writers, book clubs, and students around the world.

Loree and her real life hero Larry split their time between a tiny home in the Baltimore suburbs and an even tinier cabin in the Allegheny Mountains. One of her favorite places to visit is the Wolf Sanctuary of Pennsylvania. (She has a vast collection of “wolf stuff.”)

You initially pursued a music career. Can you tell us a bit about that?

Well, it happened sorta by accident. When I was about seventeen, I attended a “jam session” with my dad, who goaded me to get onstage and sing one of the songs I’d written. My guitar was in tune—for my voice, but not with the piano—yet the guys in the band somehow managed to follow along. The audience went nuts, and that inspired the bandleader (Bobby Pierce, I’ll never forget you!) to ask me to come back . . . after he tuned my guitar properly, of course.

I was a regular guest at the Rockin’ Horse after that, and before long, other bands in the Chicago area were asking me to stand in for absent “girl singers.” Before I knew it, I was a regular all over Chicago!

Next, a guy from Artists Corporation of America (out of Milwaukee) heard me sing and said, “Hey . . . I can get you jobs all over the country!” So I signed a contract, packed my steamer trunk and Yamaha guitar, bought a ticket on a Greyhound bus, and voila! The most enjoyable and fulfilling moments by far were those I spent in VA hospitals, crooning requests to the soldiers injured in the Vietnam War. (Yes, I’m that old! LOL)

It was a long and lonely road, though, and after about four years of traveling all over the U.S., singing and strumming, I decided to hang up my Yamaha, took a job with a local insurance company—where I met my own personal hero—and the rest, as they say, is history!

What was the catalyst to your writing career, and how does your faith play into your work?

My faith has always played a huge role in everything I do, and I suppose the reason I’m not teaching today is because God led me to this career. He didn’t do it in one leap, or by a single road, mind you . . . .

My husband’s job took us from Baltimore to Richmond, where I saw an ad in the local paper for someone to write a weekly column about the neighborhood where we lived. It was fun (though it didn’t pay) and I learned a lot about the area and met some truly fascinating people. Before long, the editor was assigning articles that took me out of the neighborhood (and paid me for them!), and in no time, the editors at other newspapers and magazines were calling, making assignments, too. By the time the family was transferred back to Baltimore some eighteen months later, I’d collected enough articles in my “clip book”  to inspire editors here to hire me.

Then, I noticed a disturbing trend: SOME editors were making subtle (and not so subtle) changes to the facts in my articles . . . to appease advertisers. One day, I just got fed up. “If you’re gonna write fiction,” I fumed, “you might as well write a novel!” And so I did (Pocketful of Love) for Barbour’s “Heartsong Presents” line. It was released in August of 1994, won the Readers’ Choice “Best Contemporary” award that year, and set me on the path that I’ll be on until they pry the keyboard from my cold dead hands!

Let’s talk about your new book, From Ashes to Honor (Abingdon Press, September 2011), the first in your First Responders Series. Please tell us about the book.

It’s the story of two people who are emotionally wounded by the events of 9/11. Their paths crossed in the weeks and months after the tragedy: Police officer Austin Finley’s guilt at not being there when his brother needed him on that fateful day caused some destructive behavior. His lieutenant issued an ultimatum: See the department psychiatrist . . . or else. Dr. Mercy Samara’s findings weren’t good, and rather than accept the desk duty his lieutenant suggested, Austin turned in his badge and gun and moved to Baltimore, where he became an EMT, rehabbed an old tugboat that became his home, and found peace and comfort in his faith.

Mercy wasn’t doing a very good job of coping with her own 9/11-related battle scars when a seriously disturbed patient committed suicide . . . and he wasn’t the first. Logic tells her she couldn’t have prevented the awful events, but Mercy can’t face any more heartache. At the suggestion of a sorority sister who lives in Baltimore, she takes a job as a guidance counselor. Unfortunately, her anger toward the God whom she believes let her down time and again doesn’t wane.

When an accident on the high school football field brings Austin and Mercy face to face for the first time in years, they’re forced to remember all they’ve tried to forget. They find comfort in one another’s arms . . . but there’s pain there, too. And on the tenth anniversary of 9/11, when they return to New York for the opening of the memorial at Ground Zero, their relationship is put to the ultimate test . . . .

I’m praying readers will see first responders in a different light . . . not just as the cops and firefighters, EMTs, and Search and Rescue personnel who show up when we’re in need . . . but as true heroes who are willing to put their lives on the line to assure our safety.

Please tell us about a recent “detour” in your life—or in one of your character’s lives—that taught you something?

My mom’s recent battle with bone cancer waylaid my writing for months. As she struggled with treatments and unrelenting pain, I found myself questioning God . . . just like so many of my characters have! But when she passed away this past August, I understood that while her suffering was difficult to watch, He had an ulterior motive: To spare her the excruciating agony that bone cancer patients must cope with before the disease ends their lives. (Bone cancer patients are very often put into drug-induced comas because nothing that doctors can prescribe will dull the extreme torture of bones that shatter and crumble, simply from a patient’s weight on the mattress!) What it taught me was . . . a little pain now can spare us a lot of pain later. So even when it’s tough, we must trust God to know what’s best for us and those we love.

You often speak at writer conferences, books clubs, and corporate events. Given the choice, what is your favorite topic?

I have the most fun teaching the Timeline Principles! The chart that I use to plot every novel has been improved and revamped dozens of times—thanks to the input of students! There are few industry-related things that bring me more joy than seeing that “light bulb moment” when a student understands something that had been a source of confusion. That moment is topped only by hearing from them when they’ve earned their own publishing contracts!

I’m crazy about soup! It’s comfort food of the best and heartiest kind, and I make it spring, summer, winter, and fall! I love the process of chopping and peeling and adding ingredients, then inhaling the delicious aromas that waft from the pot. The only thing better than that are the oohs and ahhs I hear when the family slurps my concoctions from their spoons! 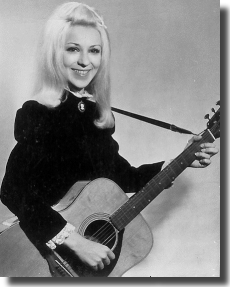 I’d be an old-fashioned folk song, something that would almost force people to tap their toes and sing along! (Photo to the right: a young Loree with her guitar.)

A minor chord, for sure, because I love harmony . . . in song and in life . . . and to reach that perfect blend, it takes a lot of voices, all with the same goal: Beautiful notes!

My friends tend to be like me: People who aren’t afraid to break a fingernail or a sweat to get a job done. I don’t believe whimpering and whining accomplishes anything, so I steer clear of people who are chronic complainers. So I guess I’d have to say I’m the strong female lead . . . who knows her limits and isn’t afraid to ask for help when she needs it!

I’m a dog lover, and I know you have a passion for ‘all things wolf.’ Please tell us about your current pets and/or your favorite pet as a child.

I fell in love with the majestic wolf while researching my novel Montana Sky. Pack dynamics—such as their loyalty and devotion to their mates—individual characteristics, the cooperation it takes to hunt big prey, and the beauty of them in form and voice is a constant source of amazement to me. They’re misunderstood . . . and is it any wonder they avoid human contact when possible!

With my fondness for wolves, it’s no surprise that I’m a dog lover, is it! But I love cats, just as much! When I was a girl, we had a Shepherd/Doberman mix named Lady who could hold her own with any kid in the neighborhood in spirited games of volleyball. She was big—but didn’t know it—and loved to cuddle up in a lap, like a teacup poodle!

Thank you, Loree! It’s great to have you as a guest at DivineDetour.

Thank you for inviting me! It’s been a real pleasure, and I hope to hear from everyone, soon!

For more information about Loree, visit her website at http://www.loreelough.com/

To purchase From Ashes to Honor logon to: